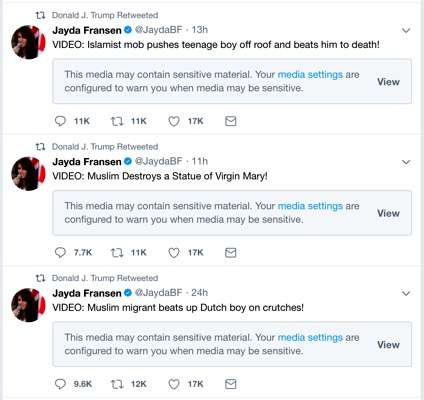 On the morning of November 29, 2017, the President of the United States re-tweeted a series of videos allegedly depicting Muslim acts of violence against Christians and Christian symbols. They had originally been posted by a member of the far right, nationalist Britain First group. It was an outrageous act of bigotry and hatred on the part of the President. It may also prove to be an act of incitement—a further act of incitement, I should say. After all, this was no isolated incident. It’s part of a clear pattern of hateful rhetoric and action directed at a specific religious community that has already contributed to a dangerous environment for American Muslims. 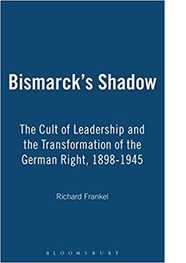 During his campaign for the presidency, Donald Trump called for a “total and complete shutdown of Muslims entering the United States.” The reason he gave was terrorism. "We cannot let this evil continue," he declared during a speech in Florida in September 2016. "Nor can we let the hateful ideology of radical Islam . . . be allowed to reside or spread within our country.” For Trump, as for many of his followers, there existed a fundamental connection between Muslims and terrorism (or “radical Islamic terrorism” as he made sure to call it at every opportunity).

Driving the connection home even more forcefully, he declared in August 2016 his intention to “screen out any who have hostile attitudes towards our country or its principles — or who believe that sharia law should supplant American law.” Sharia, or Muslim religious law, Trump was saying, and terrorism were inherently related. Terrorists are Muslims. Muslims are terrorists. Where could there be a place for such a demonized group within Trump’s American national community? What are the consequences of such a message being relentlessly driven home?

During the presidential campaign and the early phase of Trump’s presidency, acts of anti-Muslim violence reached alarming proportions. The Council on American-Islamic Relations recorded 260 anti-Muslim hate crimes in 2016, up 44 percent from the previous year. According to the FBI, such crimes against Muslims increased 67 percent in 2015. And the Southern Poverty Law Center reported a tripling of anti-Muslim hate groups in 2016. People had heard the message. And people acted on it.

As an historian of modern Germany, the President’s behavior toward Muslims is disturbingly familiar. It brings to mind one of the key methods the Nazis used in their drive to remove from the national community a group they considered an existential threat. In Hitler’s speeches, in newspapers, and in film, the government portrayed Jews as the leaders of a global conspiracy to destroy Germany and Western Christian civilization more generally. The message was clear. Jews are dangerous. The Jews must go.

One particular depiction of Jews involved terrorism—the Nazis portrayed assassination as an especially favored tool for advancing the “International Jewish Conspiracy.” Nazi propagandists worked to blame the shooting of political figures around the world on Jews.

And as with any stereotype, there exists a grain of truth. It’s true that some Jewish people did, in fact, murder people, including political targets. There was, for example, the killing in February 1936 of the Nazi leader in Switzerland, Wilhelm Gustloff, by a Jewish medical student named David Frankfurter. But the problem, of course, in any stereotype lies with the effort to pin that characteristic on the entire group—for the Nazis, all Jews were murderers. And in their zeal to pin as many assassinations on the Jews as possible, the Nazis sometimes misidentified a Gentile killer as Jewish. So, for example, when a man named Carl Weiss tried to shoot Senator Huey Long of Louisiana in 1935, the Germans assumed (wrongly, as it turned out) that he was Jewish and depicted him in the press as such. But such ineptitude should not divert our attention from the very real and devastating consequences such relentless messaging can and did have.

In the fall of 1938, the Germans rounded up thousands of Polish Jews who had immigrated to Germany years (in some cases decades) earlier and put them on trains heading for the Polish border. With the government in Warsaw unwilling to take them in, the Germans dumped them in a no-man’s land between the two countries. Learning that his parents were among the Jews then suffering in a condition of statelessness, exposed to the elements, a young Polish Jew named Herschel Grynszpan decided to take his revenge. As he was living in Paris at the time, he brought a gun with him to the German embassy and shot the first German diplomatic official he encountered, Ernst vom Rath.

Thanks to years of propaganda associating Jews with assassination, the government easily fit the act into the well-established narrative of murder as a prime tool of “International Jewry.” The shootings of vom Rath and Gustlaff and others, the Nazis said, were all related. They were all part of a single, on-going conspiracy. And as such, the shooting of vom Rath provided the perfect pretext for an unprecedented act of violence against the Jews of Germany and Austria. On November 9, rampaging bands of Nazi Stormtroopers killed hundreds of Jews, destroyed 267 synagogues, ransacked an untold number of Jewish businesses, and sent more 20,000 Jews to concentration camps. Today we remember the event as Kristallnacht, the most widespread and coordinated episode of anti-Jewish violence in modern German history. And it marked one of the final steps in the removal of the Jews from the German national community—a process made easier by the government’s relentless association of Jews and terrorism.

Donald Trump once said, “Islam hates us.” What kind of message is he sending to his followers? What are they to think of people who “hate us?” More importantly, what are they to do about people who “hate us?” Through his unrelenting association of Islam with terrorism, Trump helps separate out Muslims from those he considers “true Americans.” The portrayal of Muslims as terrorists (and only Muslims as terrorists) stigmatizes a whole group of innocent people.

The more naturally that Americans see Muslims as dangerous, as a fundamental threat to the security of American communities and the nation itself, the more the potential for violence grows. The result may not be a twenty-first-century Kristallnacht. But does it need to be? Many scenarios short of that horrific event are possible and would be enough of a nightmare in their own right. The transition from rhetorical to physical violence is one that has occurred many times in the past. Donald Trump has already set that process in motion and today he took one of his most radical steps yet. How far it goes is up to those around him and those in his party to do more than express mild disapproval. And it’s up to the rest of us to keep Muslims and others demonized by the current regime comfortably within the boundaries of our moral universe.