3 of the 4 Great Black Leaders Between the Civil War and the Civil Rights Movement Are Well-Known. But the 4th? 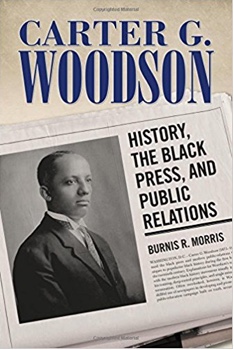 Carter G. Woodson, the former West Virginia coal miner and educator, was unequivocal in his criticism of the president of the United States. “The present regime of the oppressor would hang Thomas Jefferson, if he lived today,” he wrote.

Woodson, however, is not among the outliers in opposition to President Donald J. Trump in deep-red Appalachia. For Woodson, who is widely known as The Father of Black History, was born in 1875 and died in 1950 – long before Trump was elected president in 2016.

On this occasion, Woodson was expressing concern in a 1936 Philadelphia Tribune newspaper column that President Franklin D. Roosevelt, was ignoring the Declaration of Independence. He had previously criticized FDR in a New York Amsterdam News column in 1933 for assigning blacks minor, segregated roles for his first inauguration. Woodson also hurled choice words at President Herbert Hoover in another 1932 Tribune column, writing: “I do not think the President knows what he is doing or what he is talking about. Most of what he says on the economic situation reads like any essay of a high school boy.”

Through his leadership of the Black History Movement, Woodson had a national platform as executive director of the Association for the Study of Negro Life and History and the annual Negro History Week observances (now Black History Month) – programs he created in 1915 and 1926, respectively. Woodson was one of the most media-savvy opinion leaders of the first half of the 20th century.

Many of his followers today know his work as a proponent of the scientific method in research and his campaign to restore black lives to history books and gain respect for their contributions to the world, but Woodson was also a pundit and author of hundreds of newspaper columns that appeared in the black press, primarily in the 1930s and 1940s.

Woodson successfully used his black press platform to help him prevent the black race from becoming what he feared was a negligible factor in the world. Black communities were beset by separate and unequal opportunities and denial of basic rights when Woodson entered the national stage in 1915. Gunnar Myrdal’s 1944 landmark study of race, An American Dilemma: The Negro Problem and Modern Democracy, made numerous references to Woodson’s work. In a footnote the study stated black historiography had two divisions – before Woodson and after Woodson.

Woodson was not just a researcher who published articles about history, but he also was a caretaker and promoter of what he thought was a fragile state of Black America. His public-education campaign, often waged like a war, attacked misinformation and attempted to change opinions about blacks. He generated news on a variety of issues (politics, the economy, leadership, and education, for example) and drew attention to his cause.

Few issues or people who affected black America were off limits for Woodson’s commentaries, not even presidents. When he spoke, the black press listened, often producing large headlines over his columns and other newspaper staff reports. Journalists and owners of most influential black newspapers – including the Chicago Defender, Norfolk Journal and Guide, Baltimore’s Afro-American and Pittsburgh Courier – were his partners.

Adelaide Cromwell, a sociologist who knew Woodson and who participated in a tribute to him at the 2006 Atlanta convention of his organization, which now functions as the Association for the Study of African American Life and History, argued that Woodson was one of just four blacks who reached national recognition from the end of the Civil War to Martin Luther King’s Civil Rights Era (the others: Frederick Douglass, Booker T. Washington and W. E. B. Du Bois).

The national recognition Woodson attained was in a segregated America, where he thrived as an important black media figure, largely unnoticed by white America, except perhaps during Negro History Week observances. Black newspapers were more crucial to his success than other media outlets, although a number of white-owned newspapers and radio stations supported the Negro History Week.

For the sake of the curious, Woodson and President Trump probably would have clashed, most likely over the president’s lack of knowledge about Frederick Douglass during a February 2017 event. Woodson created Negro History Week in honor of Douglass, the 19th century abolitionist, diplomat and journalist, and President Abraham Lincoln. Their birthdays fall in February.

Woodson and Trump would have had little in common other than their Ivy League backgrounds. Woodson was the second African American to earn a doctorate in history at Harvard; Trump is a graduate of the Wharton School at the University of Pennsylvania. Trump and Woodson also might have shared a distrust of mainstream media – for different reasons. Trump’s condemnation of news articles critical of his administration, which he describes as “fake news,” is well documented. Woodson, a strong defender of truth and aggressive reporting, probably would have attacked Trump’s “fake news” claims as a smokescreen for attacking freedom of the press. Woodson’s critique of the press, on the other hand, was rooted in his concern about the unfair newspaper coverage of African Americans.

When Woodson was growing up in Appalachia and developing his worldview, he was heavily influenced by newspapers edited by both blacks and whites. He said they provided him intellectual stimulation. Near the end of his life, however, Woodson was disillusioned by the journalism practiced by the leading white newspapers; they were no longer “agents of thought.” He said the leading papers had become agents representing the interests of powerful forces, and their agendas did not necessarily serve the public. Earlier, not long after becoming dean at Howard University, Woodson had narrowly escaped a Washington, D.C., riot, in 1919, when a white mob attacked black residents. He witnessed the lynching of a black man during the riot, and the violence lasted for more than a month, helped along by the frenzy whipped up by misinformation in the capital city’s mainstream newspapers.

News media, for the most part, were segregated, and white media (newspapers, magazines and radio) were rarely more enlightened on matters of race during the first half of the 20th century than other American institutions during the Woodson era, 1915-1950, when he personally led the history movement. Mainstream newspapers rarely carried stories about African Americans outside of crime coverage, and when they did carry articles about black lives they often published them in segregated editions.

Blacks were usually identified by their race in mainstream press stories in which race was not an issue until the late 1960s, and many spelled the word Negro with a lowercase n, which is considered a pejorative in the black community.

In black newspapers, Woodson was dogmatic and a charismatic salesman. He used the black newspapers to sell ideas and their editors and reporters were willing participants. These journalists helped him persuade many African Americans that they had an honorable past (at a time when many blacks and whites had been educated to the contrary). As a public historian and self-appointed defender of black America, Woodson’s commentaries frequently were targeted at national policies and America’s role in the world. He advocated self-help programs and expected the federal government to live up to its responsibilities to all citizens – thus, his attacks on presidents when they disrespected African Americans or enacted policies that he believed violated black constitutional rights.

The extent of Woodson’s work has been fading in the national memory for decades. It is time to rediscover how Woodson waged and won his war.