Jeffrey Bloodworth, associate professor of history at Gannon University, is the author of Losing the Center: The Decline of American Liberalism, 1968–1992 (2013). 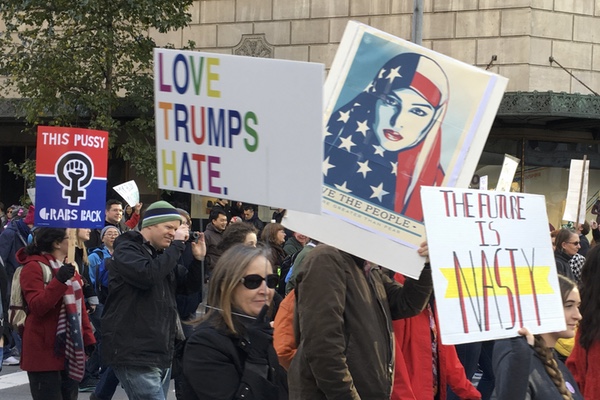 The Democrats’ “Long Peace” is over. Nearly half a century removed from its last circular firing squad, the Bernie-Hillary feud threatens to revive the nastiest of past intraparty battles. This should hardly surprise; the world’s longest-lived political party has been fractious from its inception. 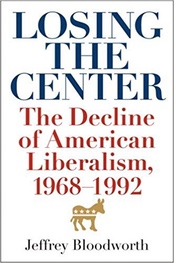 A disparate, heterogeneous coalition, Democrats have long lacked cultural unity. Indeed, the post-Civil War Democratic Party was comprised of the white South and northern, urban Catholics. Adding to the party’s absent cultural cohesion, the Civil War caused many northerners to equate secession with the “Democrats” and question its members’ patriotism. It was not only Southerners’ Americanness that was suspect, the Democrat’s northern base – immigrant Catholics – were also dubious in their allegiances. The party of “Rum, Romanism, & Rebellion” was, in the eyes of the GOP, not fully American.

An assumption born of deep historical wounds and religious intolerance, twentieth century Democrats still bear the stigma of cultural outcasts from the “real” America. The natural political home of outsiders and the alienated, Democrats have welcomed agrarian radicals, African Americans, antiwar protesters, and Colin Kaepernick into their ranks. Bandying an agenda of the economically aggrieved and ethnic minorities, twenty first century Democrats carry their party’s historic reputation with them. As a result, they, more so than the GOP, must “center” their agenda to render it palatable to Middle American voters wary of a culturally suspect party.

Centrism is a scorned tactic in today’s “rule or ruin” political landscape. At its worst, and most banal, centrism amounts to little more than unprincipled, split-the-difference politics. But centrism can, and should be, more than putting the veritable finger into the political winds and following the majority. From the Torah to the Founders, moderation has long been a prized disposition. Indeed, the Founders’ compromises at the Constitutional Convention established conciliation as an archetype of patriotic political behavior. They understood that forcing your views upon others inevitably spurs backlash. Rush Limbaugh or the Daily Show’s monologues may be emotionally satisfying, but democracy requires dialogue.

The Democratic Party has always performed most capably when it is in dialogue with Middle America. Sitting at an ideological crossroads, party activists would serve their cause well by heeding this past. Bernie Sanders’s surprising strength coupled with Hillary Clinton’s stunning defeat has sparked a much-needed intraparty debate. This dispute has drawn the obvious, and fitting, comparison to the party’s last major imbroglio; that battle that pitted New Politics liberals against the establishment’s New Deal Democrats for the course of post-1968 liberalism.

In my book, Losing the Center: The Decline of American Liberalism, 1968-1992, I argue that the New Deal coalition collapsed because liberals forfeited the political center. New Politics liberals intentionally and consciously disposed of the Roosevelt coalition for a novel alliance comprised of racial minorities, the young, the poor, and themselves, the educated middle class. In 1972, that coalition accounted for George McGovern’s paltry vote share, 37.5 percent. For the ensuing two decades, New Politics liberals piloted the Democratic Party to defeat after defeat on the backs of this grouping. The outcome was neither foreordained or forced upon liberals; they opted for political malpractice and the Reagan era commenced.

To many, the McGovern-Sanders analogy is an obvious object lesson for contemporary liberals. To this way of thinking, Democrats shifting left will inevitably take them down a McGovern path. Though this parallel has much to recommend it, analogizing with the past is not so linear and neat. Bogged down by its “cultural outcast” reputation, Democrats, more so than Republicans, must pitch their vision to the broad center. But this is not tantamount to an unchanging center wherein liberals are forever fighting on the political terrain of the 1970s and 1980s.

The political center of 2017 can be found in the same place as in 1968: Middle America. Less a geographic designation than a social and economic class, Middle Americans constitute a numerical and cultural majority. The venerable sociologist, Herbert Gans, defines Middle Americans as the “working and lower middle class,” or those with incomes lying between the 31st to the 71st percentiles. Hailing from small towns and suburbs in regions (mostly) between the coasts, whites of modest incomes and middling education proffer a distinctive cultural brand, popular individualism, that dictates their political behavior.

Distrustful of large institutions and collective action, Middle Americans pursue a defensive form of self-reliance. With personal economic security as their lodestar, they vote their perceived interests. In the Reagan era, the seeming obstacles were law-and-order and an overbearing state. As the party of civil rights and statism, Democrats were viewed as soft on crime and feckless state builders. In his classic examination of the 1970s electorate, The Real Majority, Ben Wattenberg warned Democrats about the dangers of losing Middle America. By dispensing with Middle America, Wattenberg rightly predicted the McGovern coalition had doomed itself to defeat.

But 2017 is not 1972. The Reagan era has passed. The election of a multiracial law professor and a race baiting, casino hustler to the presidency emphasizes this reality. Thus, the old issues and enemies of Middle American have changed. Rather than don bell bottom jeans and assume they are involved in an historical reenactment of the 1970s, Democrats should dispose of binary thinking. The party is not confronted with a zero sum game choice between Clintonism and Sandernistas. Sound policy that balances the necessity of economic dynamism with the societal obligation of mass material security is the primary issue of the era.

The responsible members of the Sanders and Clinton wings are equally adept at producing sound ideas. Their policy and rhetoric should be crafted in a manner that respects Middle America’s popular individualist ethos.

This political Rubik’s Cube is eminently solvable. FDR’s Social Security and LBJ’s Medicare programs are politically unassailable because they jibe with Middle American values. After a lifetime of labor, a retiree “earns” Social Security; likewise, the sweat equity of life and work entitles the elderly to the socialized medicine of Medicare. Middle America will reject a Swedish welfare state, but will heartily back “earned” entitlements.

Middle America views Democrats with wariness. They suspect the party lies outside the cultural mainstream. As New Deal Democrats revealed, sound policy pitched in a manner that respects Middle America’s worldview has (and can) overcome this perception. Democrats confront a choice; the center is theirs for the taking; reject the binary trap, Clinton-versus-Sanders thinking, for inspired moderation. In light of our current political dilemma, it is not hyperbole to proclaim that the fate of the “last best hope on earth” hangs in the balance.