How Did Workers Win the Right to Form a Union and Go on Strike?

Timothy P. Lynch, Ph.D. is a Professor of History at Mount St. Joseph University in Cincinnati, Ohio.  His book, Strike Songs of the Depression, examines the music of Depression-era strikes, the Flint sit-down strike among them. 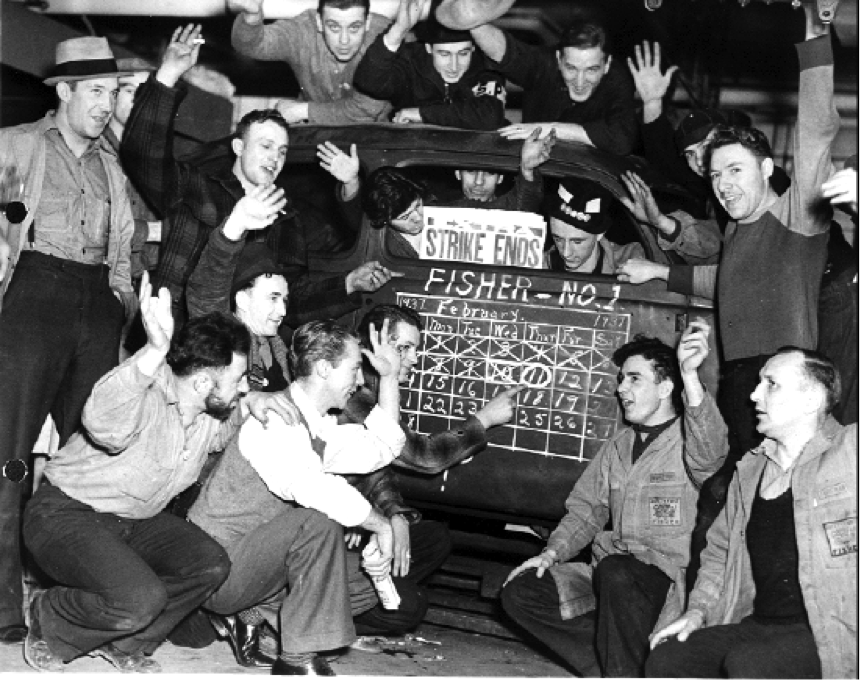 Today, the city of Flint, Michigan stands as an appalling example of government failure, dysfunction, and neglect.  Human lives were compromised for the sake of a few dollars when the water supply for the residents was switched from Lake Huron to the Flint River without the required anti-corrosive agent.  As a result, lead leached into the water supply, contaminating the drinking water and inflicting irreversible damage on the health of the community.  Flint is a city so forlorn and decayed that even its water is unsafe to drink.  So it seems odd to consider that eighty years ago this year, Flint was the site of one of the most important victories in the advance of a middle class in America.

February 11, 2017 marked the 80th anniversary of the successful conclusion of the General Motors sit-down strike in Flint, Michigan.  It has been eight decades, then, since autoworkers first secured collective bargaining rights under the United Auto Workers’ banner.  Because of its importance, the Flint sit-down strike has been described as “the most significant American labor conflict in the twentieth century.”

Victory in Flint was hardly a foregone conclusion, nor did it come without a struggle.  Despite the fact that New Deal legislation guaranteed workers the right to join a union, General Motors did everything in its power to thwart unionization of its workers.  The corporation’s most formidable tool was espionage, spending $1 million on surveillance in the three-year period prior to the strike.  So establishing a union in Flint was a difficult task indeed.

The decision of the union to use the sit-down tactic was born of successes in earlier strikes.  The UAW had already successfully struck Bendix, Midland Steel, and Kelsey-Hayes, all companies allied to the auto industry.  But it was understood by union leaders that a victory against a major automaker in its heart of production would be necessary to win collective bargaining rights for autoworkers.

The occasion for the strike would come when rumors surfaced that dies were being shipped out of Flint to plants in Grand Rapids and Pontiac, Michigan, presumably to relocate production and thereby circumvent a strike.  So on December 30, 1936, union leaders called for workers in the Fisher Body plants to sit-down.  By seizing control of these key plants, the union was effectively able to disrupt GM production.

Initially, GM simply hoped to outlast the workers holed up inside the plants.  But strike supporters on the outside, especially members of the Women’s Auxiliary, provided the sit-downers with the necessary food and support.  Then, on January 11 the company turned off the heat in Fisher Body No. 2 and attempted to oust the sit-downers inside.  The fight that ensued has come to be called “The Battle of Running Bulls.”  Using high-pressure hoses and heaving bolts, door hinges, bottles, and rocks, the strikers were able to repel the advancing police.

It was at this point in the strike that the National Guard was called into Flint by Governor Frank Murphy.  Friendly toward labor, the governor also invited union and management leaders to Lansing to negotiate.  But when it was learned that GM had also agreed to meet with a company union, sponsoring a back-to-work movement, the UAW refused to vacate the plants.  Even subsequent efforts by Secretary of Labor Frances Perkins to bring GM’s president Alfred Sloan together with CIO chieftain John L. Lewis failed to break the deadlock.

The UAW made a bold move on February 1 when it feigned a strike at Chevrolet No. 9, drawing company police to that plant.  The diversion allowed the union to seize and occupy Chevrolet No. 4, a vital engine production plant.  With the UAW having gained the upper hand, the company finally entered into serious negotiations with a union delegation led by Lewis.  On February 11, forty-four days after the strike began, the sit-downers walked out of the plants, having secured collective bargaining rights for their union.

The lessons of this hard-fought battle are many.  The importance of labor-friendly elected officials, such as Governor Murphy, proved significant.  He showed great restraint in his use of the National Guard.  The support of friends and family members on the “outside” was also critical.  Providing food, walking picket lines, and attending to many other tasks was essential to the success of the strike.  But perhaps most important was the deep and abiding sense of solidarity the sit-downers had in their union, the United Auto Workers, that empowered them to persevere against seemingly insurmountable odds.

Victory in Flint in 1937 not only resulted in union contracts in the auto industry, but it also ushered in a wave of sit-down strikes in other industries.  By the decade’s end, union membership had more than tripled, with much of that growth in the Congress of Industrial Organizations (CIO), which focused on industrial workers.  Union growth continued during the war years.  As industries vital to the war effort expanded to be the “arsenal of democracy,” labor benefited.  But it was not simply manufacturing and heavy industry that unionized, teachers and nurses, police officers and fire fighters, grocery clerks and university professors, among others, organized.  Ten years after the Flint strike, approximately one-third of the non-agricultural workforce was unionized.  And as unions grew, so too did the middle class.

Today under ten percent of American workers are union members, approximately the same level of the 1920s, before workers enjoyed collective bargaining rights.  There are many who see this as a good thing, and welcome the decline.  They decry unions as outmoded and unnecessary, claiming workers no longer need union protection.  But that is hardly the case.  Those who belong to a union enjoy higher pay, better working conditions, and superior benefits than their nonunion counterparts.  Bargaining as a collective does make a difference.

What is often not acknowledged is what unions mean for the nonunion worker.  Those businesses, which would prefer to steer clear of a union contract, can only do that if they provide comparable wages and benefits.  When unions are busted and removed from the bargaining table, both  the union worker and the nonunion employee suffer.  The best friend of the nonunion worker is the compatriot of similar trade with a union pin on his or her lapel.  Because when union membership declines, the middle class shrinks.

So this Labor Day, as you enjoy that picnic with family and friends, raise your glass to more than just another summer gone by.  Eight decades ago auto workers in Flint, Michigan held fast for forty-four days to secure collective bargaining rights.  It is the single most powerful tool workers have for ensuring just pay, equitable benefits, and decent working conditions.  And in so doing, restoring the middle class.