Michael S. Neiberg is the inaugural Chair of War Studies in the Department of National Security and Strategy at the United States Army War College. His latest book is The Treaty of Versailles. The views expressed are those of the author and do not necessarily reflect the official policy or position of the Department of the Army, Department of Defense, or the U.S. Government.

At times I found it a bit surreal to work on a book about the Treaty of Versailles during the 2016 presidential election. On the surface, few topics in modern history would seem less relevant to our times. The debates of 1919 dealt with now bygone topics like determining the fates of overseas empires, replacing collapsed monarchies, and demobilizing armies numbering in the millions of men. What could be less germane to a discussion of our own age, especially when seen from the perspective of the United States? 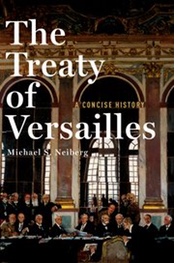 But the political rhetoric and the debates of 2016 bore a remarkably similar tone to those of 1919. To the extent that the 2016 campaign was about foreign policy at all, it revolved around the fundamental question of whether American interests were better served by playing a leading role in international organizations or by remaining independent of them. The Trans-Pacific Partnership, NAFTA, the UN, and NATO all became targets of those who argued that multilateralism sacrificed American strength and sovereignty without providing sufficient compensatory benefits in return.

This debate began its modern life in 1919, when the so-called Big Four victorious powers (France, Britain, the United States, and Italy) gathered in Paris to put the world of 1914 back together. President Woodrow Wilson argued for American participation in international organizations designed to subsume national interests to a wider international one. Through increased linkages between states and through arbitration of interstate disputes, the theory ran, global tensions could be reduced. Giving states and individuals a larger stake in the global system should incentivize them to care for the overall health of that system, even in those moments when it did not directly benefit them.

Wilson’s most ardent opponents are today known as isolationists, although the term is misleading. Most of them did not argue for ignoring the outside world, nor did they naively believe that what happened outside America’s borders did not matter to the wellbeing of the American people. To depict them as such is both to misunderstand them and to dismiss them as historical irrelevancies.

American isolationists circa 1919 argued that international organizations ran counter both to American traditions and interests. They also argued that American participation in them might be unconstitutional because they ceded powers reserved for the elected representatives of the American people to non-American bodies. Under some interpretations of the League of Nations, for example, the League could order American troops to war in a dispute between two Asian or Latin American powers. The most ardent Senate opponents of the League, called the Irreconcilables, argued that the Constitution reserved that responsibility exclusively to the Senate. Similarly, the League could theoretically side with, say, Panama in a dispute with the United States, forcing America’s own allies to conduct military operations against it.

Isolationists were fond of citing George Washington’s warning in his farewell address about the perils of foreign entanglements. They also argued that a great power like the United States should not play by the same rules as a small state like Panama or Siam. Massachusetts Senator Henry Cabot Lodge, the Republican chairman of the Senate Foreign Relations Committee and leader of the Irreconcilables, also argued that Article II, Section 2 of the Constitution gave the Senate the responsibility to ratify treaties, a power that applied not only to the Treaty of Versailles itself but to all foreign agreements signed by the United States or in the United States’ name.

Influenced by American Exceptionalism, isolationists also argued that an America unfettered by the League of Nations could do maximum good, not only for the United States, but for the world. Sometimes they argued for strictly limiting America’s role overseas, but, just as often, they argued that a greater American global role was in the interests of everyone. On this point they agreed with Wilson that expanding democracy and global markets benefited all; but they disagreed with Wilson on how best to achieve it. To men like Lodge and his ally Theodore Roosevelt, any limits on American power from outside its borders fettered both the march of global progress and American leadership of that progress.

A more moderate group, called the Reservationists, did not oppose the idea of international organizations in principle, but they wanted to ensure that such organizations could not harm American interests. They wanted exemptions written into the League of Nations Covenant protecting the Monroe Doctrine and the Platt Amendment that allowed the United States to intervene unilaterally in Cuba. By most contemporary estimates, the Reservationists had the support of a majority of Americans in 1919.

To depict this debate as a personal one between the idealistic Woodrow Wilson and reactionary enemies like Lodge is to miss the point. Perhaps more importantly, simplifying the arguments about the Treaty of Versailles relegates the postwar debate about America’s role in the world into a periodization that ends with the Senate’s rejection of the Treaty of Versailles in November 1919. But as the 2016 election showed, these debates have always been part of the political discourse.

The intellectual descendants of the Reservationists remained influential. By 1945, the United States had been instrumental in creating a new group of international organizations on their model, including the United Nations, the Bretton Woods economic systems, and the International Monetary Fund. NATO, the World Health Organization, and many others soon followed. They all had in common structures that ensured that they could not harm American interests, either through an outright American veto, as in the UN Security Council, or American domination, as in the funding model of the IMF.

These structures, based in the ideology of the Reservationists, held through the so-called Cold War consensus. With that consensus now slipping away, the debate has solidified around the two extreme positions laid out in 1919. Thus with the benefit of time and distance, we can see more clearly the essential bifurcation in American views about the nation’s role in the world, and how they began in the aftermath of the heated debate over the Treaty of Versailles.