There Shouldn’t Be any Statues Honoring Robert E. Lee Anywhere

Ed Simon is a senior editor at The Marginalia Review of Books, a channel of The Los Angeles Review of Books.A regular contributor at several different sites, he holds a PhD in English from Lehigh University, and can be followed at his website, or on Twitter @WithEdSimon. 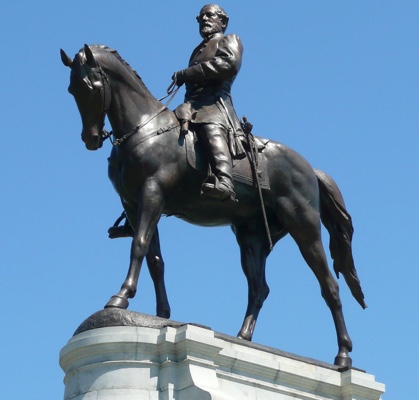 That there should be a single tended statue honoring Robert E. Lee anywhere in the United States is a moral obscenity; that there should be a memorial in any of these fifty states to Stonewall Jackson is grotesque; that Nathaniel Bedford Forest’s name be inscribed on any honorable stone is a supreme dishonor. Robert E. Lee, who was “not satisfied with simply lacerating our naked flesh… [but] ordered the overseer to thoroughly wash our backs with brine, which was done,” as reported by his slave Wesley Norris. Robert E. Lee, whose soldiers abducted free black men during his invasion of Pennsylvania, and forced them into slavery back south. Robert E. Lee, who refused Ulysses S. Grant’s offer of a swap of prisoners of war because the Union general wanted such an exchange to occur regardless of the race of the soldiers. Lee, a man who was content with soldiers under his own command not acquiring freedom as long as it meant that black men would also not be free. There should not be a single memorial to such a man.

The Confederate flag – which only saw its modern resuscitation in direct response to the civil rights movement of a half-century ago – should be as reviled as the Nazi swastika. We do not have statues for Erwin Rommel in the United States, why should we honor the defeated generals of another nation which fought against the ideals of America? I speak not of Confederate cemeteries for those young men conscripted to fight on behalf of a heinous lie, for the dead belong to a country which flies a different banner from any on this Earth. I am not advocating for desecration of the graves of those grey-clad multitudes who fought at Gettysburg and Antietam. But, frankly, it is tiring to have to make this distinction. While one can distinguish between the young men conscripted to fight for the Confederacy and the traitors who convinced or forced them to fight, there should no doubt that the “cause” for which they fought was pure nihilism, a state built upon the subjugation of fellow humans.

There should be little controversy over the observation that the Confederacy fought for despicable, tyrannical, and yes, evil reasons. No obfuscation can alter the fact that the Confederacy was built upon the very opposite proposition of the Declaration of Independence, that the architects of the Confederacy like Jefferson Davis and Alexander Stephens explicitly constructed their attempted nation around the blasphemous belief in the inequality of humans, and that wealthy plantation owners used the lie of white supremacy to convince poor white boys to fight on their behalf, so that wealthy southerners could continue to wring gold from black bodies, while staining cotton fields red with black blood. That there is any controversy over the assertion that the Confederacy’s cause, purpose, and reason for existing was a manifest evil speaks to these supposedly united states manifestly refusing to reckon with the legacies of slavery, the Civil War, and racism on both sides of the Mason-Dixon line. Many nations with equally ugly pasts are capable of a collective introspection which we have so far mostly avoided.

In the twelve years after the Civil War, Reconstruction attempted to correct some of the beliefs which later became embedded in the American psyche, but that noble (and until it was aborted, not unsuccessful) experiment in social justice was recast a generation later as being the perfidy of Northern “carpet-baggers,” and thus the lie of the “Lost Cause” started to become orthodoxy in both north and south. In this historical misunderstanding, or rather conscious obscuring, the Confederate cause was recast as being one of chivalric planter-gentleman fighting a war on behalf of simple agrarian values, a pastoral rebellion against the industrial mechanization of the north. A convenient lie in its simplicity, one which obscures the ways that the southern ruling class in the generations before the Civil War pursued an expansionist, imperialist cause, as is the case with men like William Walker and his desire to create white southern slave colonies in Latin America.

Or consider the argument that the Confederacy fought on behalf of “states’ rights,” which always engendered the conveniently never answered question “Right to do what?” Such a defense of a supposed “Lost Cause” ignores the ways in which the Civil War initially was about the violation of states’ rights – the violation of northern states’ rights. Abolitionist sentiment in the north was always a vocal but relatively small minority, until the legislative power of the southern states, made numerically greater by the immoral chicanery of constitutional tricks like the 3/5ths compromise, pushed through bills like the Fugitive Slave Act. Suddenly normal citizens in Pennsylvania, New York, and Massachusetts who cared little about universal emancipation were forced into becoming slave catchers for wealthy plantation owners in Virginia, the Carolinas, and Georgia. That racism was (and is) a reality in the north doesn’t alter that what the Confederacy stood for was supremely tyrannical. One does not need to argue that the Union was perfect to point out that nothing was good about the cause for which the Confederates fought.

The Lost Cause myth has been questioned since the 1960’s, and historians take it as an obvious matter that the Civil War was primarily fought over slavery. Yet internet message boards, letters to the editor, and the enduring celebration of Confederate memorials and symbols testify to the widespread Lost Cause myth. For all those who think the Confederate cause was simply a demonstration of nobility and valor, consider the Confederate Vice President Alexander Stephens infamous “Cornerstone Speech” delivered in Savannah in 1861, in which he explained that “Our new government is founded upon exactly the opposite ideas” of the U.S. Declaration of Independence, that the C.S.A.’s “foundations are laid, its cornerstone rests, upon the great truth that the negro is not equal to the white man; that slavery, subordination to the superior race, is his natural and normal condition.” For those who think that the boys in grey innocently fought for some romantic fantasy of magnolia scented nights and Spanish moss covered verandas, consider historian Henry Jaffa’s observation that “Stephens's prophecy of the Confederacy's future resembles nothing so much as Hitler's prophecies of the Thousand-Year Reich. Nor are their theories very different.”

A continual celebration of a lie is not just morally corrosive, it denies those southerners – black and white – who suffered under the totalitarian Confederate regime, and who were willing to resist that regime. That in many parts of the south black Americans have been the majority and have made incalculable contributions to American culture is bracketed out of discussions of “Southern Heritage” for those who would prefer to keep celebrating Robert E. Lee. That’s not to speak of white men and women who fought the slave system; here I am thinking of Newton Knight and his “Free State of Jones” in Mississippi which resisted the Confederacy with an interracial insurrection, or the Red Strings in North Carolina and Virginia who organized an internal guerilla resistance campaign against the illegal government in Richmond. These radical and genuinely noble figures are made invisible by the noxious grey haze of Confederate nostalgia, and so all southerners are denied access to a heritage for which they could be genuinely proud in favor of forced allegiance to the obscenity that is the Confederacy.

No doubt one unintended consequence for the fascist organizers of Charlottesville’s “Unite the Right” rally this past weekend is that it has only stiffened the spine and convictions of civil servants who will see the removal of such statues from their jurisdictions. Both the mayors of Lexington and Baltimore have moved up the dates for removal of Confederate memorials from their cities. On Monday a group of protestors in Durham, North Carolina forcibly pulled down a Confederate memorial, calling to mind statues of Stalin being demolished at the conclusion of the Cold War, or of Nazi sculptures being smashed, or even of King George III’s equestrian visage being melted down by Americans in New York on the eve of the Revolution. To remove Confederate memorials is not to white-wash history, far from it. It’s to finally remove the stain which concealed for too many Americans the reasons for why that hideous war was fought. To remove Confederate memorials is to finally admit and see our history for what it really is. Donald Trump claimed that those marching in Charlottesville to prevent the removal of Lee’s statue from Emancipation Park, and who were goose-stepping under the un-American banners of the Confederate flag (and the Nazi flag), simply “cherish our history.” Those men may cherish many things – intolerance, bigotry, racism – but they do not cherish history.