The Founding Fathers Have Another Lesson to Teach Us

In the aftermath of the shooting of Representative Steven Scalise and three other people on a baseball field outside Washington D.C., it seems we are ever further away from healing the partisan divide. Part of my purpose in writing The Emergence of One American Nation was to remind us that we are the inheritors of a great nation and of the founding generation. But these men had their own substantial disagreements, so perhaps it is worth remembering a few of those and how they resolved their differences, which point to two interrelated conclusions. One is that we are a better nation for having diverse opinions that are debated extensively. The second is that such debate often leads to better outcomes. Strong leadership can help to foster such results. 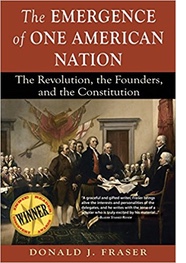 In the late 1780’s, a tiny elite of American society decided that the government under the Articles of Confederation was nearing collapse, and they set out to create a whole new form of government for the country. Some historians, including Joseph Ellis, have labeled their actions a coup. While such a characterization may stretch the definition of coup a bit far, they were indeed a small group led by some of the most important Americans of their time, including George Washington, James Madison and Alexander Hamilton. The results of their handiwork, and that of the other 52 delegates who attended the Constitutional Convention in the summer of 1787 in Philadelphia, was the American Constitution. Drafted in secret during that long, hot summer, the document then went underwent major debate in thirteen separate ratification conventions. “As the instrument came from [the Convention] it was nothing more than a draft of a plan, nothing but a dead letter, until life and validity had been breathed into by the voice of the people, speaking through the several State Conventions,” Madison would later write. The ratifying conventions would pit the supporters of the new Constitution, who now went by the name Federalists, against the Antifederalists, those that stood opposed.

There were two general approaches that were followed in the state ratifying conventions. Pennsylvania, in a rush to be the first to ratify the document, tried the cram down approach, ignoring any input from the Antifederalists and simply using their superior numbers in the Convention to approve the document without any proposed changes. In Massachusetts and Virginia, where the vote was much closer, the Federalists actually treated their opponents with respect. While in Pennsylvania there was ongoing opposition to the Constitution, in Massachusetts many of those who voted no pledged their support and agreed to work to convince their constituents to do the same. One of the opponents, Benjamin Swain, indicated that “the Constitution has had a fair trial … that many doubts which lay on his mind had been removed,” and that he would “support the Constitution as cheerfully and as heartily as though he had voted on the other side of the question.” And as part of the outcome from the Virginia ratifying convention and his later campaign for the House of Representatives, James Madison pledged to fix the major blunder the Constitutional Convention had made; this was to add a bill of rights to the document. As the process of framing and implementing a new form of government makes clear, free and open debate can create support even among those who originally disagree, and can also generate a better result. Can anyone imagine the United States without the Bill of Rights?

The new government under the Constitution was soon embroiled in partisan controversies as Thomas Jefferson and Alexander Hamilton engaged in a titanic struggle over the future course of the United States. Hamilton’s financial plans, which included a funded debt and a banking system, caused the first rift between the two men and led Jefferson, along with Madison, to form the Democratic-Republican Party to compete with the Federalists for power. Jefferson and his followers believed that the only way that a republic could survive was in a system without major inequalities of wealth, and that Hamilton’s plans would create a moneyed class, ultimately destroy popular government and replace it with some form of monarchy. Partisanship soon spun out of control in the aftermath of the French Revolution, which the Democratic-Republicans generally supported and the Federalists condemned, fearing disorder and the overturning of all hierarchy. The outbreak of war between Great Britain and France only made matters worse. Jefferson aptly described the level of partisanship that resulted when he wrote that the war had infused “the two parties with an ardour which our own interests … could never excite” and “that men who have been intimate all their lives cross the streets to avoid meeting, and turn their heads another way lest they should be obliged to touch their hat.”

Despite their partisan differences, can anyone imagine our country without these two giants competing with each other? We live in a nation that is part Jeffersonian and part Hamiltonian. From the aristocratic Jefferson, we cherish liberty, equality, democracy, and the importance of the ability of the average person to fully participate in government. From Hamilton came the vision that America’s economic future lay with capitalism and an activist central government.

Jefferson also knew that there was a time to heal the wounds of partisanship. In the aftermath of his narrow victory in the election of 1800 Jefferson set out to do this. In his inaugural address, Jefferson urged his “fellow citizens, [to] unite with one heart and mind.” He reminded his listeners that all disagreements of opinion were not matters of principle. And then, the most famous line: “We are all republicans----we are all federalists.” While some newspapers would capitalize the two words, converting them into references to the two parties, Jefferson meant no such thing. Rather, he was referring to the fact that most people in the country had accepted both the federal union, in which power was divided between the national and state government, and that the public should have a role in choosing those who governed them. As his biographer Dumas Malone has written, Jefferson was saying that the Federalists too were “loyal Americans, whose patriotism should not be impugned,” and that “they were not the enemy.” His words gave reassurance to those on the other side who feared that his presidency would lead to utter disaster for the country. The Chief Justice, John Marshall, who was no fan of his cousin Jefferson, thought that the speech was “well judged and conciliatory.”

Perhaps we should take a page from the founders and remember, in this age of hyper partisanship that we must not demonize those with whom we disagree. We need to find a way to break out of our individual silos and listen to the other side’s point of view. This does not mean ending disagreement, but rather changing our tone. Better outcomes occur when we do this. And our politicians need to lead in this area, and not exacerbate the problem. President Kennedy once wrote of the relationship between the people of the Soviet Union and the United States: “we all inhabit this small planet. We all breathe the same air. We all cherish our children’s future. And we are all mortal.” Should we feel any less toward our fellow Americans?