Before FDR Gave His Pearl Harbor Speech, Eleanor Gave Hers

Greg Sumner is a Professor of History at the University of Detroit Mercy and the author of "Detroit in World War II" (The History Press). 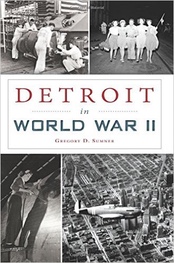 Everyone knows about Franklin Roosevelt's defiant speech to Congress the day after Pearl Harbor, in which he declared that Japan's attack marked “a date which will live in infamy.” But FDR was not the first in his inner circle to address the American people as the shock waves set in.

His wife Eleanor, a formidable figure in her own right, decided to go ahead with her weekly Sunday evening radio broadcast just hours after the terrible news broke. In her familiar patrician voice, firmer and more resolute than usual, the First Lady set the tone for the nation, reassuring listeners of her faith in “the free and unconquerable people of the United States.” It was a masterly two-and-a-half minutes, spoken from the heart and filled with the words “we” and “our”:

For months now the knowledge that something of this kind might happen has been hanging over our heads. And yet it seemed impossible to believe, impossible to drop the every-day things of life and [undertake the] one thing which was important: preparation to meet an enemy, no matter where he struck. That is all over now, and there is no more uncertainty. We know what we have to face and we know that we are ready to face it.

Before signing off, Mrs. Roosevelt took time to speak directly to the wives and mothers in the audience. With her own sons in the service, she understood the burdens they were now being asked to bear. And she reminded her fellow citizens on the home front of their heightened responsibilities.

“We must go about our daily business more determined than ever to do the ordinary as well as we can.”

As our country moves forward into the uncertain world of 2017, seventy-five years after Pearl Harbor, we can take solace and inspiration from E.R.'s small, dignified demonstration of leadership that dark day of infamy. Her language of teamwork and solidarity, her spirit of optimism about the arc of history, her challenge to “get your hands dirty and do your part” for the greater good—the credo that defined her entire public life--paid off in that moment of maxium crisis, and can help us today as we interact with each other and go about the most ordinary tasks of our lives.