Is There Still a “Party of Lincoln?” 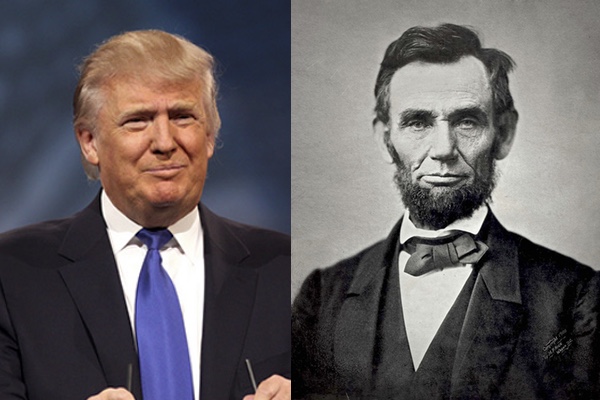 For Americans born before the mid-1990s, the current partisan vortex seems incomprehensible—how could it have gotten so bad? For my students, by contrast, who know only the George W. Bush and Obama presidencies, politics are by their nature brutal and pointless. But what if Donald Trump’s takeover of the Republican Party, and the grassroots upsurge powering him to victory in the Electoral College (while losing the popular vote by as much as two million ballots), was not radically new, but instead a reassertion of some of the oldest currents in American politics?

The realities of our current party system emerge from the fog of historical confusion only if we go back before the Civil War. Since the early nineteenth century, our politics have always featured a multi-class, “populist” white nationalist party. Beginning in the 1820s, under the dynamic leadership of Andrew Jackson, it called itself the Democratic Party, which dominated national politics until Lincoln’s election.

Jackson advocated pure laissez-faire and minimalist government, declaring unconstitutional any federal support for “internal improvements” like roads, canals, and railroads. Most Democrats endorsed the South’s slave system as part of the natural order. They also tolerated mob violence and disdain for the law in favor of charismatic authority. Not for nothing did Henry Clay, founder of the opposition Whig Party, accuse Jackson of “Caesarism,” and Whigs commonly derided Jackson as “King Andrew.”

But the Jacksonian Democratic Party was also, in its own way, profoundly democratic, contemptuous of any hierarchy among white men: all were equal and expected to be treated as such, regardless of how ragged their speech, teeth, or clothes. It welcomed immigrants, especially the Catholics reviled by many Whigs as superstitious pawns of the pope. It opposed activist government as a tool of “special privilege,” corruption, and elite conspiracies. In the Democratic worldview, men should be left alone to make their own way.

If you step back, Jacksonian politics should seem quite familiar. A mass-based white nationalist party never died, it just migrated in fits and starts to another home. Even as Northern Democrats moved toward providing “security for the common man,” in FDR’s famous phrase, their party’s Southern wing maintained its traditional commitment to defending ordinary white men against all comers.

The model pioneered by Jackson has always faced substantial opposition, however. After the Revolution, the Hamiltonian Federalists favored a strong federal government (and many, like Hamilton, disliked slavery). After their demise, the Whigs emerged and eventually, northern Whigs like Abraham Lincoln founded the anti-slavery Republicans in the 1850s. All of these parties were committed to a powerful national state backing economic development. Whigs enthusiastically supported internal improvements plus banking and corporation laws facilitating capitalist expansion. With equal fervor they backed sweeping social reforms. For men like Lincoln, temperance, free public education, and curtailing slavery were ways of perfecting society using the power of government. Democrats hated all these reforms, but they hated anti-slavery most, as the ultimate version of government telling people what they could not do with their own property. Therefore, a progressive pro-capitalist party that uses government as a tool to improve the lives of everyone—whether they want it or not—should also seem familiar. That yesterday’s Whigs and Republicans are now called Democrats is one of history’s perverse jokes. Does anyone pretend that the Republican Party’s founders would feel at home in today’s GOP?

Many scholars will insist this argument for a deep-seated continuity is at odds with basic facts, since the nineteenth-century Democrats were emphatically pro-immigrant. They will point out, correctly, that it was Whigs and Republicans who appealed to nativist (as in anti-Catholic) impulses, although leaders like Lincoln avoided that taint. They are half-right. If today’s Democrats resemble the old Republicans, their current embrace of immigrants of every race and religion is quite a shift.

Such claims miss the more fundamental continuity: Jacksonian Democrats welcomed immigrants because of their expansive sense of what constituted a “white person.” They practiced a secular, multicultural nationalism, but the word “white” was always central. They were extraordinarily hostile to immigration by anyone else, and led the way in passing the 1882 Chinese Exclusion Act, the most restrictive legislation ever enshrined in U.S. national law.

What has changed is not the parties but the character of the immigration. The new Republican nativism is a surprisingly clean fit with the old Democratic racialism. In the Age of Obama and now of Trump, white nationalism has found a new outlet. The Negro bogeyman may finally be receding in favor of “ISIS,” “Mexicans,” and the ever-rising power of the People’s Republic of China.

Today’s Trump Republicans also carry forward the Jacksonian Democratic tradition in their penchant for lewd and vulgar speech, and calls for extralegal violence. Before, during, and long after the Civil War, Democrats insisted that Republicans wanted to make white girls marry “nigger husbands.” Just before Lincoln’s election, Democrats paraded through Manhattan with a float on which a man impersonating the famous Republican editor Horace Greeley lasciviously embraced another man wearing a dress and blackface. Over them floated a banner reading “Free Love and Free Niggers Will Surely Elect Old Abe!” However ludicrous in retrospect, this rhetorical pornography still had a poisonous effect, and sometimes turned deadly. In the 1840s and 50s, southern Democrats regularly threatened their northern opponents with bodily harm, and Jackson labeled former President-turned-Congressman John Quincy Adams a “traitor” for his attacks on slavery. In 1856, South Carolina Representative Preston Brooks attacked the abolitionist Senator Charles Sumner of Massachusetts on the floor of Congress, beating his head with a heavy cane. The ultimate expression of Democratic contempt for law, of course, was three generations of racial terror, including thousands of lynchings, in the Democratic Solid South, from the 1870s to the 1950s.

Why shouldn’t today’s Democrats stake a claim as the Party of Lincoln? It is historically accurate to suggest they are carrying forward the old fight for human equality, national unity, and progress under a new flag, versus a party dedicated to racial exclusion, religious division, and a profoundly reactionary response to the vast changes in the world. In the late 1850s, increasingly violent polarization between the national Democrats, dedicated to the extension of slavery, and the explicitly northern Republicans, dedicated to its eventual abolition, brought about a civil war and the transformation of the nation, an “unfinished revolution,” as Eric Foner dubbed it. It is no longer inconceivable that we are heading for another great division, with unforeseen results, so we should get clear about who stands for what.