Leslie Kitchen is a former book review editor for HNN. 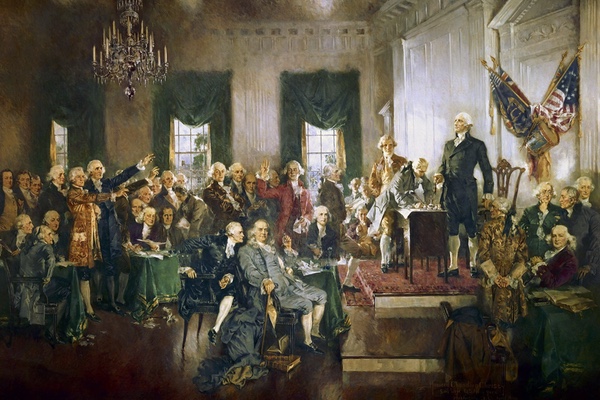 I love studying our founders. Washington was a stalwart. Franklin was an international phenomenon. Jefferson was a visionary. Hamilton and John Adams had eye-opening depth. Madison was the plodding, unexciting intellectual hedge-hog who pulled it all together.

But now we have the founders this, the founders that. It seems that both the thoughtful and the thoughtless on both sides of our great and yawning political divide are eager to connect the founders with every favored policy, every drunken political whim, every pie-eyed, half-cocked ideological monstrosity. Even though they drape it all in the robes of holy, unchallengeable authority, we should remind ourselves to tread carefully, for authority is one of the safest refuges for scoundrels.

The rub is that something being the intention of the founders does not ipso facto make it right, nor does it ipso facto make it work, and this past week's awarding of the presidency to the fellow who got fewer votes is only one more data point that it's all not working very well. Our electoral system, with its antiquated, anti-democratic electoral college is not serving us well. Counting heads to decide crucial issues is a very doubtful method, in and of itself, but counting heads and awarding the prize to whoever gains the second-most votes is purely perverse.

Of course this issue of our connections to the past is much broader than that. As we cling to what the founders bequeathed to us, our overall national well-being continues to be hindered by states and regions that cling to an anti-modern ethos. Because of that, more and more, America is out of step with the modern world, sometimes untethered from reality. Because of that, both cosmopolitan respect for diversity and a broadminded delight in intellectuality and scientific thinking are becoming targets for derision. A rebarbative but highly resourceful minority of intolerant zealots is hindering our progress as a giant and truly great nation. I love America, but it appears to me that there are a number of other nations that exhibit greater flexibility and adaptability in the face of change. Heraclitus, perhaps the greatest of the pre-Socratic Greek philosophers, maintained that all of the real world is in a constant state of becoming, a constant state of flux. Change, in that view, is a primary quality of reality. We are no longer, as we were at the founding, a backwater string of primarily rural former British colonies. We live in the 21st century, not in the 18th. Either we change or we let the death rattle begin.

Lincoln was not a founder, but one could do worse when seeking an authority to counter the founding authorities. His sober good nature and his ability to see beyond immediate circumstances bring me comfort in some of my darker moments. Lincoln clearly drew his inspiration far more from the ringing clarion call of the Declaration of Independence than he did from the ramshackle compromises of the Constitution. Fourscore and seven years reached back to 1776 not 1787. That is one of the reasons why he once declared at a time of great crisis: "As our case is new, so we must think anew, and act anew." Like Lincoln, we can still revere the history of our founders and learn much of value from it. But also like Lincoln, we must not allow that reverence to shackle our minds and enfeeble our actions. That was not the original intent of our founding founders.