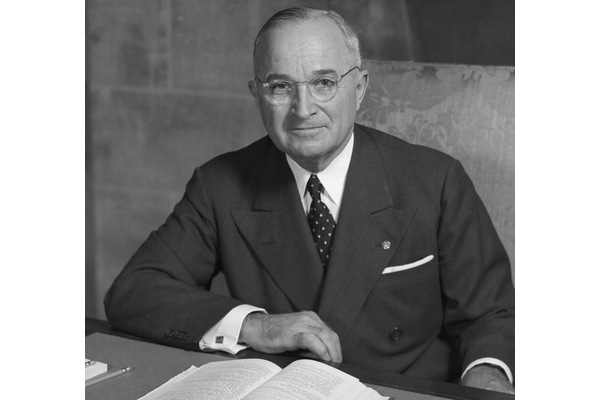 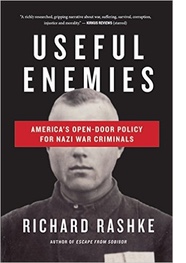 It would be difficult to over-estimate the confusion and misery that all but swallowed war-torn Western Europe in the months after World War II.  The sheer number of homeless and displaced persons was staggering.

Besides the millions of German soldiers who had to be screened for Nazi affiliation and the more than 200,000 SS officers who had to be investigated for possible war crimes, civilian armies of tramps clogged the roads.  Ten million were fleeing the rubble and starvation of bombed cities.  Another ten million were concentration/work camp survivors and former slave laborers.   Facing a sick, starving, anxious horde of humanity, Western Europe had a problem of gargantuan proportions.

President Harry “The Buck Stops Here” Truman was one of the few postwar political leaders who faced the refugee crisis with both compassion and determination.  He recognized that Western Europe could not absorb all the refugees crammed into its displaced persons camps, and that it would be unrealistic and unfair for the United States to expect it to.  Whereas Roosevelt chose to deal with refugees as a political problem, Truman confronted it as a humanitarian problem.  Whereas Roosevelt had asked, “What’s expedient?”  Truman asked, “What’s right?”   And Truman concluded that what was right was for America to accept its responsibility as a nation victorious in war and, unlike its allies, not torn apart by its victory.

“The grave dislocation of populations in Europe resulting from the war,” Truman said to Americans, “has produced human suffering that the people of the United States cannot and will not ignore.”

Soon after the war officially ended in June l945 with the signing of surrender documents, Truman began to pressure Congress to pass an emergency immigration bill that would replace the inadequatenation-by-nation quota system, which was the heart of the 1924 Immigration Act.  Under that act, the total quota for the entire Soviet Union and the Baltic countries in 1945 was a meager 98 persons. What Truman aimed for was a congressional act that would allow the Department of State to issue 400,000 U.S. visas to European refugees.

Instead, Congress gave Truman a draft bill that, if passed, would bar all immigration to the United States from any country in the world.  The battle line was drawn.

The pending congressional bill was popular because the majority of Americans remained  anti-refugee after the war.  A 1946 American Institute of Public Opinion Poll asked:  “About a million Polish people, Jews, and other displaced persons must find new homes in different countries.  Do you think the United States should let any of these displaced persons enter the country?” Fifty-eight percent said “no,” even though unemployment was low.

Not one to shy away from a bare-knuckle brawl, Truman gave Congress until its 1945 Christmas vacation to pass a comprehensive displaced persons bill.  When it didn’t, the President  did an end around.  He signed an executive order (directive) on December 22, 1945.   He was motivated in part by an August 24 report written by Earl G. Harrison, former U.S. Commissioner of Immigration and U.S. Representative on the Intergovernmental Committee on Refugees.  Citing the Jews being held in the American zone in Germany, Harrison wrote:

“Many Jewish displaced persons are living under guard behind barbed-wire fences,  including in some of the most notorious concentration camps [and have] no clothing other than their concentration camp garb. Most of them have been separated [from their families for] three, four or five years and they cannot understand why the liberators should not have undertaken immediately the organized effort to re-unite family groups.  Many of the buildings are clearly unfit for winter...

“As the matter stands, we appear to be treating Jews as the Nazis treated them, except that we don’t exterminate them. They are in concentration camps in large numbers under military guard instead of SS troops.  One is led to wonder whether the German people, seeing this, are not supposing that we are following or at least condoning Nazi policy.”

On August 31, a week after he received a copy of the Harrison Report, Truman wrote General Eisenhower, Governor of the American Zone of Occupied Germany, asking him to provide humane treatment for Jewish victims.  “I know you agree with me that we have a particular responsibility toward these victims of persecution and tyranny who are in our zone,” Truman said.  “We must make it clear to the German people that we thoroughly abhor the Nazi policies of hatred and persecution.  We have no better opportunity to demonstrate this than by the manner in which we ourselves actually treat the survivors remaining in Germany.”

Although the U.S. quota-based 1924 Immigration Act limited Truman’s options, he skillfully used the system to bring unwanted European refugees into the country. As he pointed out in his December 1945 directive, the United States had filled only 5 to 10 percent of its yearly immigration quota (7,000 to 15,000 refugees) between 1942 and November 1945.  This was in part because the war had imposed restraints on the visa-granting process, but also in part because the majority of Americans didn’t want refugees in the U.S.

It was time to right the wrong.

The Truman Directive went on to order the Departments of State and Justice to immediately begin granting visas to displaced persons whose countries of origin were in Eastern Europe, the Balkans—members of, or under the sway of, the Soviet Union—and in Germany. The total slots allocated to these countries by the l924 Immigration Act was 39,000 per year.  Truman wanted every slot filled in 1946.  To soften criticism, he said that he hoped the majority of those who received U.S. visas under his directive would be orphaned children.  How could Americans and their congressional leaders reject orphans without a country?

According to the 1924 quota chart, two-thirds of the total yearly allotment of visas in the countries covered by The Truman Directive were earmarked for Germany.  And there was the rub.  Given that nearly all German refugees were Jews, the directive, in effect, opened the U.S. door to approximately 26,000 Jews.  (About 23,000 would actually receive visas in l946.)

Leaving nothing to chance, Truman then went on to instruct the Secretaries of State, War, and Justice, as well as the Surgeon General and the War Shipping Administrator to implement his directive. Then, as a symbol of his commitment to displaced persons, Truman ordered the Departments of State and Justice to begin immediately processing visas for the nearly 1,000 European war refugees being held at Fort Ontario Emergency Refugee Shelter in Oswego, New York. They had been quietly transferred to the United States from a DP camp in Italy by President Roosevelt.  It was a cynical gesture.  Roosevelt specified that the “Safe Haven” refugees were to be returned to their countries of origin after the war.  Most of them were Jewish.

On December 23, 1945, the day after Truman signed his directive, major newspapers across the country gave the refugee story front-page coverage, without printing the directive in full.  As a result, the only ones who studied the document and did the arithmetic were Jewish organizations.  Their reaction was: “Thank you Mr. President, even if it’s just a drop in the bucket.”  Stephen Wise, the outspoken president of the American Jewish Council, also gave token thanks to Truman for the Christmas present, but he was quick to add that his preference would have been visas for Palestine.

Anti-Semitic Americans were so busy trimming their Christmas trees that they failed to check the arithmetic.  One can only imagine the outcry if they had realized that 24,000 more Jews were soon to get U.S. visas.

Historians have paid scant attention to The Truman Directive, which they saw as little more than a face-saving gesture, like Roosevelt’s Oswego refugees. In relegating the directive to a footnote, they fail to see that the document was a White House declaration of war on an obstructionist Congress.

Miffed by the Christmas surprise attack, Congress snubbed the White House throughout l946 by rejecting Truman’s repeated demands for a displaced persons bill.  Blocked by Congress, Truman took his case directly to the nation in his 1947 State of the Union address.  He told the country that he didn’t think the United States had done its share in accepting European refugees, and that new immigration legislation was necessary to admit more.  He asked the Eightieth Congress for a swift, fair, and generous American response to an international humanitarian crisis.

It wasn’t a popular stance.

In July l947, six months after his call to action, Truman prodded Congress again in a special message:  “We are dealing with a human problem, a world tragedy,” he said.  “I urge the Congress to press forward…and to pass legislation as soon as possible.”

Congress adjourned for the summer.

Like 1946, the year 1947 drew to a close without congressional action. In January l948, Truman once again pushed Congress to ante up at once “so that this nation may do its share in caring for homeless and suffering refugees of all faiths.”

Finally, on June 2, l948, three years after the war ended and nearly seventeen months after Truman’s 1947 State of the Union challenge, the Senate finally passed a refugee bill.  The House followed with its version ten days later.  Neither chamber held a single hearing.  Anxious to adjourn for the summer and distance itself from the fallout, Congress hastily cobbled both bills.  Then, late at night on the last day of the session, Congress passed the Republican-sponsored Displaced Persons Act of l948 without a single public hearing.  Authorizing the entry of only 200,000 refugees over the next two years—Truman had asked for 400,000 over four years—the bill managed to incorporate the worst of the Senate and House versions.

There was no national fury or hand-wringing over the flood of new immigrants into America.  The country was back at work and its xenophobia had softened.  The Veterans of Foreign Wars became the symbol of a new open-mindedness in America.  This influential organization had been America’s foremost opponent of displaced persons immigration. By 1948, VFW publicly welcomed a limited number of them for humanitarian reasons.

Truman greeted the new immigration law with anger and disgust. It was founded on “abhorrent intolerance,” he said, and it had deliberately painted him into a corner. With international pressure mounting on the United States to do its share and Congress headed home for summer vacation, there was no time to waste.  Convinced that a deeply flawed act was better than no act, Truman signed the bill on June 25, l948.  Then, he took the Eightieth “Do Nothing Congress” to the woodshed.

“It is with very great reluctance that I have signed…the Displaced Persons Act of l948,” Truman said in a speech after the signing. “If Congress were still in session, I would return this bill without my approval and urge that a fairer, more humane bill be passed.  In its present form this bill is flagrantly discriminatory.  It mocks the American tradition of fair play…[But] if I refused to sign this bill now, there would be no legislation on behalf of displaced persons until the next session of Congress.”

Congress had finally gotten even with Harry S. Truman.  The Displaced Persons Act of 1948 made “abhorrent intolerance” the new immigration law of the land.