Why Do the Americans Still Need Vietnam and the Vietnamese Need Them?

Christopher Goscha is an associate professor of history at the Université du Québec à Montréal. The author and editor of numerous books on Vietnam, Southeast Asia, and international relations in English and French, he lives in Montreal, Canada. His latest book is Vietnam:  A New History (Basic Books, 2016). 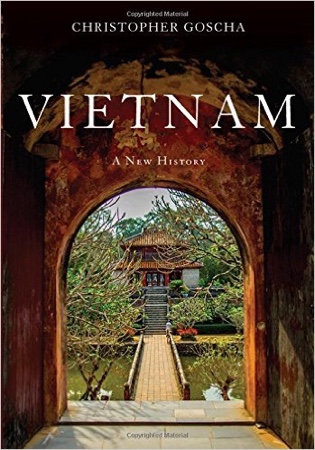 President Obama’s highly publicized visit to Vietnam in May 2016 reminded us of the important role this small country continues to play in global geopolitics. As the Chinese directly challenge American naval dominance over the Pacific and Indians Oceans, Vietnamese and American strategists have increasingly put their past differences behind them in order to focus on how best to deal with China’s increasingly aggressive claims to the sea, many of its islands, and lanes.

Many observers, especially those opposed to America’s military intervention in Vietnam in the mid-20th century, tend to downplay the geopolitical importance of Vietnam. America had no business getting involved in Vietnam in the first place. The famous ‘domino theory’ justifying American intervention in Vietnam was flawed. The communist threat was overblown from the start. But one doesn’t have to believe in the ‘domino theory’ or take sides for or against American intervention in the ‘Vietnam’ War’ to recognize that Vietnam remains one of these historically coveted areas of the globe where empires go.

The Americans were hardly the first to intervene in Vietnam for geopolitical reasons and they were not the last. Because of its overland connections to Southeast Asia and its maritime opening to the Pacific and Indian Oceans, Vietnam has always tempted bigger powers to intervene. The Chinese empire ruled northern Vietnam for almost a thousand years beginning around the second century BCE. As the empire’s southern most province, Vietnam served as a gateway for China’s trade with Indian Ocean markets extending to India and the Middle East. Indeed, much as the Silk Road pulled the Chinese empire towards Eurasia’s interior, the Indian Ocean’s markets drew it towards the south. Chinese trade with the world’s other great empire of that time, Rome, went across the Silk Road the Indian Ocean. It is no accident that Roman coins have been unearthed in today’s southern Vietnam. 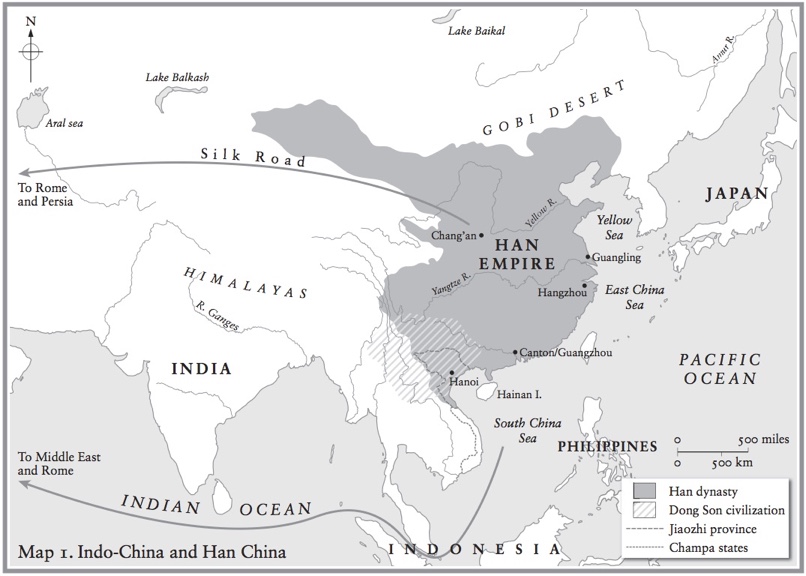 The Vietnamese secured their independence in 939, but briefly lost it again to the Chinese in the early fifteenth century as the Ming dynasty (1368-1644) recolonized Vietnam as part of its wider imperial expansion that sent Chinese armadas across the Indian Ocean as far as eastern Africa and the Red Sea. The Mongols had also tried to pass through Vietnam in the 13th century in order to take control of the Spice Islands of today’s Indonesia. The Vietnamese pushed them back by land while the Japanese and Javanese did so by sea. And although the Vietnamese regained their independence from the Ming Chinese in 1427, we often forget that they then pushed their own empire southwards to benefit from trade with the Indian Ocean world dominated until then by the Cham and Khmers.

Following the Chinese recall of its navy from the high seas in 1433, a new set of European imperial powers expanded into the region via the Pacific and Indian Oceans, the Spanish and Portuguese followed by the British, French, and Dutch. These Western imperial powers adopted increasingly aggressive policies towards Asia in the nineteenth century when the French colonized Vietnam and the British confiscated Singapore, Burma, and Malaya. Meanwhile, the Americans crossed the Pacific Ocean to take the Philippines from the Spanish while the Japanese leveled their colonial sights on Korea and Taiwan. The Americans were part of this larger colonial assault on Asia in the 19th century.

The French were aware of the strategic importance of their Vietnamese colony in this wider imperial competition. In the early twentieth century, they finished building the deep-water port of Cam Ranh Bay, located off the southeastern coast of Vietnam. Russian warships dispatched from the Baltic to stop Japanese colonial expansion into China and Korea gathered there before being defeated by the Japanese in 1905 à Tsushima. Following the Japanese invasion of China in 1937, President Franklin Roosevelt closely followed Japanese movements down the Chinese coastline and imposed an embargo on Tokyo as Japanese imperial troops started occupying Vietnam in 1940. His fears of a wider Japanese thrust into the Indian Ocean via Vietnam were well founded. In early 1942, having attacked Pearl Harbor a few weeks earlier, the Japanese occupied all of Vietnam and then concentrated their ships in Cam Ranh Bay before attacking Southeast Asia and striking as far as the Andaman and Nicobar Islands. Created that same year in Australia, the American 7th Fleet attacked and began rolling back the Japanese empire until the end of the war in August 1945. The American navy replaced the Japanese navy that year. It controls the Pacific and Indian Oceans to this day.

Following the Chinese communist victory in 1949, American presidents of all political colors (Truman, Eisenhower, Kennedy, and Johnson) were convinced that if Vietnam fell to the communists, it would allow the Soviets and the Chinese to march across the region much as the Japanese had done before them. The famous domino theory did not appear out of thin air because Eisenhower evoked it in 1954 when speaking of the possible defeat of French troops at Dien Bien Phu. And despite their disdain for French colonial rule over Vietnam, from 1950 (as the Korean War got underway just to the north), the Americans increased their support of the French in Indochina in order to contain the spread of communism. The 7th Fleet first called on Vietnam in 1950 to reassure the French of American backing.

When the French withdrew from their war with Ho Chi Minh and agreed to divide Vietnam, like Korea, into a communist north led by Ho and a non-communist South, the Americans accepted but switched their support to an anticommunist Vietnamese leader for the South named Ngo Dinh Diem. As long as this man did not undermine America’s wider strategic goal of containing Eurasian communism, things could continue as they had with the French. But they didn’t and when Diem’s draconian policies in the countryside (land reform, strategic hamlets, and repression) seemed to play into the communist hands the Americans supported his overthrow in 1963. However, when stability still remained elusive, President Lyndon Johnson had to either get out of Vietnam for good or intervene directly. He decided to send in US ground troops in early 1965 while the US navy stationed the bulk of its forces in Cam Ranh Bay.

Ironically, the American withdrawal from the country in April 1975 in no way diminished its geopolitical importance as a new set of ‘great powers’ were already competing with each for influence in the world – the Soviets and the Chinese. Having broken ideologically and violently with the Soviets since the late 1960s, the Chinese worried that their communist brethren in Hanoi would join the Soviets to help encircle them from the south (the Soviet army invaded Afghanistan in 1979 and accelerated its naval expansion into the Pacific via Vladivostok). The Chinese threw their weight behind the genocidal Khmer Rouge in Cambodia, whose leaders were virulently opposed to the Vietnamese, communist or not. The Vietnamese turned to the Soviets, signed a security treaty in 1978, including the lease of Cam Ranh Bay to the Soviets, before overthrowing the Khmer Rouge later that year. China’s leader, Deng Xiaoping, travelled to the United States to win over American support of a project to teach Vietnam a lesson for this “betrayal.” In early 1979, the Chinese sent troops into Vietnam in what was the first war among communists in world history. Significantly, thanks to their access to Cam Ranh Bay, the Soviets projected their naval power deep into Southeast Asia for the first time ever in world history.

The crumbling of the Soviet empire and its European satellites by 1991 profoundly altered the geopolitical calculus, but not the strategic importance of Vietnam. With the Soviets and their navy gone, the Chinese have for the first time since recalling their armadas in 1433 begun reasserting their influence into the Indian Ocean, taking, claiming, and even building islands. Given that the war among Asian communists in the late 1970s put to rest any notion of an operational communist bloc or alliance, Vietnamese communists have now entered into negotiations with the Americans, Japanese, Europeans and anyone else who can help them deal with the resurgence of Chinese naval power despite relying on Chinese communist models for economic renovation and continued single-party rule.

The Americans share the Vietnamese desire to contain the Chinese naval thrust into the Pacific and Indian Oceans. And this is why President Obama, like Presidents Bill Clinton and George W. Bush before him, travelled to Vietnam. The Americans still ‘need’ Vietnam and the Vietnamese need them. Why? Because Vietnam is in the middle of that area where American control of the Indian and Pacific Oceans dating from WWII bumps up against the Eurasian continent and a Chinese empire increasingly willing to challenge the American naval hold over Asian waters. Little wonder talks have already begun allowing American vessels to use the Vietnamese naval facilities of Cam Ranh Bay. Vietnam continues to find itself perched upon one of the globe’s most dangerous geopolitical fault lines.