by Harvey Lodish and Bruce Peabody 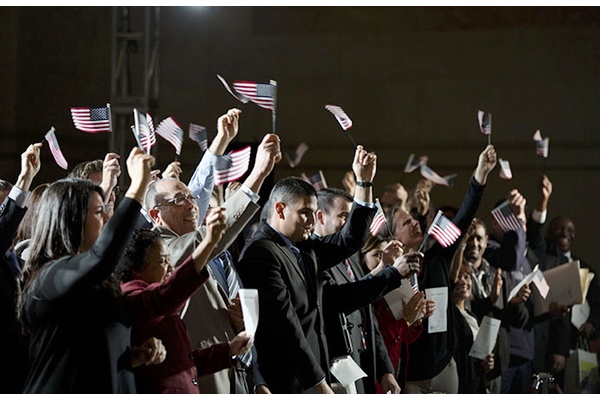 During the 2016 presidential campaign, no substantive area has highlighted the differences between the two main candidates as much as immigration. As the Council on Foreign Relations puts, it “[f]ew issues provide more grist for debate in Washington and on the campaign trail.” As a result, immigration is certain to resurface as a prominent partisan fault line over the coming weeks leading to election day.

But this is one political divide the nation can cross, no matter who wins on November 8. By returning to the breakthrough immigration reforms of the 1960s we find there’s common ground that can help lawmakers navigate one of today’s most important policy conflicts.

For Donald Trump, immigration provides an opportunity to promote both a more uniform national identity and a more protectionist, America-first economic and foreign policy. The candidate wants to build a wall to keep Mexicans away, ban Muslim immigrants, and openly wonders “[w]hy aren't we letting people in from Europe” instead of other ethnic and national groups?

On the Democratic side, the rhetoric on immigration generally focuses on humanitarian concerns, and emphasizes the values of diversity and tolerance. Hillary Clinton has said that immigration reform is “at heart, a family issue,” a matter of bringing together those separated by national borders. She has supported calls to welcome 65,000 Syrian refugees beset by civil war, and has called for implementing existing immigration laws in a “more humane” manner.

While the current campaign rhetoric suggests irreconcilable partisan differences, we find that U.S. immigration policy over the past 50 years points instead to a shared road, fashioned from a basic and enduring idea: the influx of people from other lands contributes to American economic and national security, and thereby advances our self-interest.

President Lyndon Johnson’s revolutionary immigration reforms tend to get lost amidst the successes of his civil rights initiatives and the failures of his war in Viet Nam. But in the landmark Immigration and Nationality Act of 1965, Johnson turned the nation away from longstanding policies that privileged the entry of white, northern Europeans, and disfavored immigration from Southern and Eastern Europe and Asia, an approach that broke with the tradition of nativism, which “knitted together racial hierarchy and national security fears.”

Johnson’s new orientation increased annual immigration and replaced the old geographic and ethnic quota system with one that allocated visas to three groups: refugees, individuals with close ties to family members already legally established in the U.S., and foreign nationals who possessed special skills or training that would benefit the nation.

U.S. immigration patterns transformed dramatically after the new bill became law. For example, in the 1950s, northwestern Europeans and Canadians represented 60 percent of total U.S. immigrants, while people from Asian nations comprised just six percent. Within a generation, however, white Europeans and Canadians had dropped to 22 percent of the total figure, while Asians surged to 35 percent.

The Johnson administration defended these changes with two core arguments. First, it contended that a more liberal (rather than racial and exclusionary) approach to immigration enhanced our international reputation and power. In 1964, Secretary of State Dean Rusk defended the president’s proposed law before Congress by arguing that “[w]hat other peoples think about us plays an important role in the achievement of our foreign policies.”

While Rusk’s argument was driven by Cold War geopolitics, his basic insight applies in 2016 as well. Our ability to promote and protect American values throughout the globe depends upon our own record as a nation committed to the free and productive exchange of people, ideas, and labor.

The second way in which Johnson and his allies defended his immigration policy is even more applicable today. The president argued that his focus on merit and skills rather than race and cultural familiarity would promote better national economic performance, in part by filling gaps in areas of industry and training where the U.S. lagged in technical expertise and substantive knowledge.

Indeed the rapid expansion of science, engineering, and medicine in the United States had begun two decades earlier, following World War II, when universities and industry took advantage of an influx of overseas refugees. Simultaneously the federal government began to support the sciences, in part by establishing the National Science Foundation in 1950 and expanding the existing National Institutes of Health and the Atomic Energy Commission.

But if the post-war period, and greater government-private sector cooperation helped fuel scientific advances, the 1965 immigration law was an intellectual accelerant. Consider just one measure of the benefits secured by greater American access to an international pool of top-flight researchers. The National Academy of Sciences is arguably the most prestigious U.S. professional organization that “recognizes and promotes outstanding science.” Annually, the NAS elects a select group of 84 of the nation’s most distinguished scientific scholars to join their ranks.

In our research, we discovered that over the past six years (2011-2016), one third of these inductees were foreign-born, hailing from nations as diverse as Guatemala, China, South Africa, Iran, Turkey, Syria, Hungary and Viet Nam. Since the National Academy requires that its members be U.S. citizens at the time of their induction, what these figures mean is this: if we cull the ranks of our nation’s most decorated and productive scientists, an extraordinary one out of every three individuals has emigrated to this country. Similarly, the laboratories of universities like MIT and non-profit research organizations like Whitehead Institute are filled with some of the world’s best students and postdoctoral researchers from more than 100 countries, most of whom plan to remain in the United States.

These researchers are not only making discoveries that directly benefit the day-to-day lives of U.S. citizens, they are building the infrastructure for American innovation going forward. They attract superior international talent to our laboratories and research centers. They teach and mentor a new generation of scholars, inventors, and entrepreneurs. And they are often on the cutting edge in forging new industries and creative business-research partnerships that propel an essential and growing part of the U.S. economy.

Of course, all this may simply tell an outdated story. The coalition that supported Johnson’s immigration reforms might be dismissed as a kind of museum timepiece. After all, his 1960s bipartisan mix cobbled together humanitarians, free-trade advocates, and those who believed our security was strengthened by having the U.S. as an international moral leader. In contrast, today’s hyper-partisan tribalism, fears about economic inequality, and uncertainty about globalization do not offer an especially stable terrain for building a similar, middle road for immigration policy in the years ahead.

Admittedly, whatever the results in November, the 45th President of the United States will face a divided nation in 2017. But she or he must still try to find a way forward on immigration. With more than 42 million immigrants in the U.S. (legally authorized as well as undocumented) the issue is too important to ignore or cede to campaign trail soundbites. While it surely will be difficult to build a bridge between divided parties and peoples on this issue, we think the enduring, irreducible political element of economic self-interest is a promising place to start.