We Had Our Own Refugee Crisis. You Know it as the Civil War.

Chandra Manning, Associate Professor of History at Georgetown University, currently serves as Special Advisor to the Dean of the Radcliffe Institute for Advanced Study at Harvard University. Her most recent book, Troubled Refuge: Struggling for Freedom in the Civil War (Knopf, 2016), is about contraband camps. 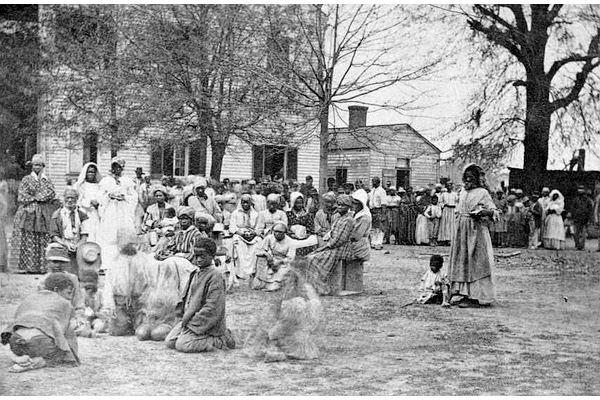 Columns of smoke rose along the river’s edge as terrified children clung to the legs of women clutching a frying pan, a tattered basket, or nothing at all. Someone found an old skiff and the refugees climbed aboard, two or three at a time, to sail to a sandbar in the middle of the river. They improvised shelters out of brush, and huddled under them until the besieged city across the water finally fell. Once it did, they made their way in, looking for safety and opportunities to work for the occupying force. Some found both. Others, especially at first, found crumbling buildings without much to offer except a place to die. Still others found their way to nearby encampments at places like Yazoo River and Paw Paw Island. What all of them found were refugee camps, not in Dadaab, Kenya or Zatari, Jordan, but in and around Vicksburg, Mississippi in 1863. They were not alone. Over the course of the Civil War nearly half a million men, women, and children fled from bondage to the so-called “contraband camps” that sprang up wherever the Union Army infiltrated the Confederacy. Emancipation in the U.S. Civil War was, among other things, a refugee crisis. 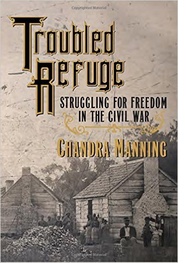 Understanding emancipation as a refugee crisis helps us better understand what it was like to exit slavery. For former slaves who braved enraged owners, search parties, hunting dogs, and flight through a war zone to get to the Union Army, to flee slavery was to enter the unknown. When a woman piled her children and a basket of eggs into a canoe and walked alongside it to get into Union lines, or when a man leapt off a moving train, or when a young boy followed long lines of soldiers in blue, none of them had any way of knowing what was coming. They had no reassuring narrative arc to follow, no coherent analytical framework to order their days. They had the precise details of what the given day brought them, and, like refugees everywhere, they had to piece those details into an escape route.

Understanding emancipation as a refugee crisis also helps us see how former slaves’ aspirations crashed up against structural forces, especially violence and hard power. Without a doubt, the first steps toward freedom were taken by the individual men, women, and children who drew on their own courage, determination, and resilience to bolt for Union lines. But courageous, determined, and resilient slaves had hated bondage for centuries. It took an army fighting against their owners to give the enslaved access to a source of power strong enough to overcome slaveholders and topple the edifice of slavery. As in any refugee crisis, the will of the refugees did not always win out, for the same war that made the prospect of freedom more attainable also made refugees from slavery vulnerable to destructive forces like firepower, disease, and merciless military necessity.

Of course, not all refugee crises are exactly the same: Civil War emancipation was unique among refugee crises in that it resulted in a new version of citizenship that mattered not just for former slaves, but for all citizens of the United States. Before the war, citizenship looked different than it does now. States rather than the federal government adjudicated it. It offered property owners (and potential property owners) membership and belonging within a community but not direct protection of rights aside from property. And in all but a handful of states, it excluded African Americans. During the war, freedpeople in contraband camps entered into uneasy alliances with Union soldiers to defeat the Confederacy. Their direct contributions to Union victory staked a claim on the protection of the U.S. government they helped to save, and in so doing, invented a new version of citizenship as the exchange of usefulness to the United States for federal protection of basic rights, open not only to property owners or white people, but to anyone who offered labor and loyalty to the United States.

The version of citizenship forged in contraband camps neither fulfilled all of former slaves’ hopes nor survived in its entirety. The Fourteenth Amendment to the U.S. Constitution preserved three key features of the wartime definition: its residence with the national rather than state government, inclusion of basic rights protections, and extension of eligibility to African Americans. At the same time, the Fourteenth Amendment shifted the basis for citizenship away from labor and loyalty to birthright, and it diluted (though it did not erase) the federal role in rights protection. Wartime citizenship, then, can be understood as incomplete not only in the sense of its shortcomings, but also in the sense that it represented one stage in the unfinished and ongoing project of defining citizenship. Even after the ratification of the Fourteenth Amendment, subsequent events and evolving forces would continue to reshape what citizenship meant, sometimes expanding it and other times contracting it, which should come as no surprise, for the definition of citizenship could never be a once-and-for-all kind of task. It has always been and will remain a work in progress.

The contraband camps where refugees from slavery spent the Civil War were neither idylls to be romanticized nor diabolical detention centers to be sensationalized. They were improvisations thrown together in the midst of crisis, where all parties were up against more than they could manage. In the chaos of the war, freedpeople forged partnerships with Union soldiers, which in turn invented a new version of citizenship, at once inclusive, imperfect, and as mutable as the Mississippi River rolling through the landscape. To this day, defining citizenship remains an ongoing and perpetual duty, for which our generation bears its share of responsibility.