It’s that Time of Year Again ... When We Recognize Indigenous People!

Dina Gilio-Whitaker (Colville Confederated Tribes) is an award-winning journalist and columnist at Indian Country Today Media Network. A writer and researcher in Indigenous studies, she is currently a research associate and associate scholar at the Center for World Indigenous Studies and the co-author (with Roxanne Dunbar-Ortiz) of “All the Real Indians Died Off” And 20 Other Myths About Native Americans (Beacon Press, 2016). 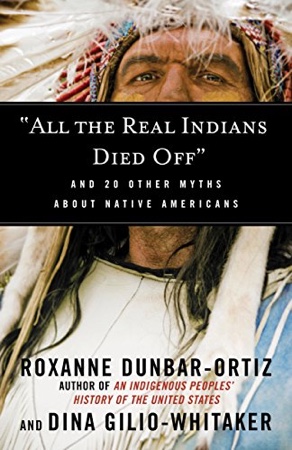 In the fall America notices Indians. Throughout the rest of the year in the US, Native people are virtually invisible, but with the onset of autumn they start coming into focus through a mix of images and social phenomena. These phenomena, which include Indian football team names and mascots, and those campy "Pocahottie" Halloween costumes, are so normalized in mainstream society that many US Americans fail to understand why Native people are offended by them. That these things are now—finally—controversial, rather than taken for granted, indicates a growing process of de-normalization and the strengthening of Indigenous counter-narratives.

Football (and other sports team mascots) that bear the caricatured images and once-acceptable but derogatory names that represent living people, can only happen in a society that has adopted certain mythologized narratives about its own history. Those narratives are conveyed at every level of society, beginning in preschool. Their function is to instill patriotism and a sense of uncritical loyalty to the nation-state.

US American origin narratives portray a vision of the country's founding in innocence and righteousness. Simply stated, the United States' innocence emerges from religious persecution in Europe (the bedrock narrative of Thanksgiving). And the bravery and spirit of European exploration, as reflected in the Columbus Day narrative, is part of the country's exceptional righteousness.

That the land was already inhabited is a conceptual problem for these origin stories, especially given the extreme violence that accompanied Columbus's voyages and the unending waves of European immigration beginning in the 17th century. In order to rationalize that violence and justify the righteousness of European settlement, it was necessary for them to dehumanize the Indigenous inhabitants. This was accomplished with the help of the church, which long before the "discovery" of the New World had declared Indigenous peoples inferior by the mere fact of not being Christians.

The violence is purposely evaded when the narratives are perpetuated in elementary and secondary school classrooms, and what we get instead are white-washed, romanticized tales about "encounters" between Indians and settlers. Unaware of the historical reality, adults are frequently shocked and disoriented to learn the brutal and ugly truths. In the face of this cognitive dissonance, in order to protect the carefully-constructed internal wall of patriotism, loyalty, and national belonging, denial is often the response.

All this obscuring of the truth and and subsequent denial contributes to a process of national discursive erasure of Indigenous peoples. The result is that when Native Americans are taught as a subject in classrooms, they are presented as relics of the past--in effect, extinct.

It is no wonder then, when Native people protest against the disrespectful use of their images, names, and inaccurate histories, they are often met with acrimony from the dominant culture. They are accused of being angry, and not able to "get over" the past.

Non-Natives are even more confused when it comes to Native protests against corporate development that threatens their lands, resources, and lives. But because Native peoples are invisible in the American political landscape, those kinds of battles remain largely unseen by the mainstream.

Such is the case with the recent Dakota Access Pipeline (DAPL) controversy. When the people of the Standing Rock Sioux Tribe in North Dakota learned of the fast-tracked oil pipeline development—which was to be built adjacent to the reservation, criss-crossing the Missouri River, the primary source of water for the reservation and millions of other people downriver—they set up an encampment in protest last spring on land near the construction site.

The protesters (they call themselves water "protectors") claimed that the pipeline posed too great a threat to their water supply and environment, and that the tribe was not adequately consulted as required by law. Meanwhile, Standing Rock filed for a temporary injunction to halt the construction.

The peaceful, prayerful protest went unnoticed until the contractor, Energy Transfer Partners (ETP), in August began digging in a culturally sensitive area. Construction was halted after the likelihood of burials was confirmed. While mainstream society was oblivious to what was happening in North Dakota, Indian country was watching and Native people began streaming in to the encampment from all parts of the country to support the Standing Rock people. By the end of August the encampment had swelled to thousands of people, Native and non-Native alike.

Still, mainstream media ignored what was happening. It wasn't until Labor Day weekend that that began to change, after the company resumed construction—this time damaging a burial and sacred site. ETP was at the ready with a private security force in what appeared to be a deliberate provocation, unleashing attack dogs and pepper spray on the peaceful protesters. It took violence for the story to be picked up by the corporate media, and even then much of their coverage tended to reflect a pro-pipeline stance, and ignored the context of the US history of land dispossession of the Standing Rock Sioux Tribe and Native Americans more broadly. A notable exception was Lawrence O’Donnell’s ongoing coverage at MSNBC (including this stunning commentary).

In general, it’s fair to say that the alternative media is increasingly covering Native American issues with more frequency and historical accuracy, and from Native perspectives.

On September 9, the Justice Department denied the injunction. Moments later a joint statement was issued as an intervention by the departments of Justice, Interior, and Army calling for ETP to voluntarily halt construction, and for a review of the consultation process with tribal nations to proceed sometime this fall.

Until then, the water protectors will remain at the encampment. It remains to be seen how the Obama administration will handle the review process. And how the media will respond to both. But with any luck, Indigenous counter-narratives will continue to emerge, helping to build a better way of teaching about contemporary Native American issues.