A Trump Presidency Would Amount to an Environmental Nightmare 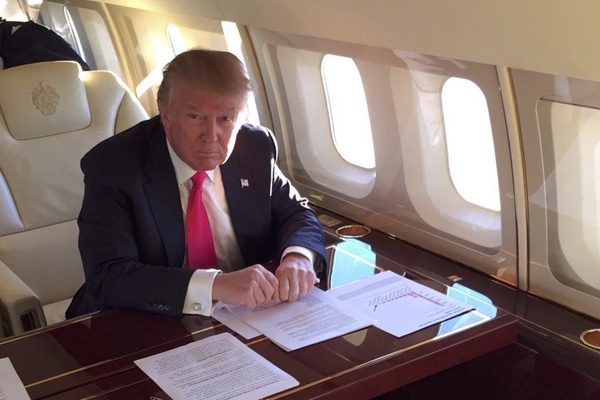 In the 1970s two important voices warned us that us that the American materialism of the time was dangerous. One came from the economist/environmentalist E. F. Schumacher (1911-1977), the other from President Jimmy Carter. We did not heed the warnings of either man. Today, many years of environmental deterioration and U. S. war-waging in Afghanistan and Iraq later, the consequences of not heeding their warnings is clearer than ever. To make matters worse, one of our two major contenders for the U.S. presidency, Donald Trump, epitomizes the dangers about which Schumacher and Carter warned us.

By the late 1970s, the U. S. lifestyle had become used to purchasing a steady stream of new goods. As historian William Leach wrote in 1993,

Already in 1963, anthropologist Jules Henry wrote in Culture Against Man that the two main “commandments” of U. S. culture were “Create More Desire” and “Thou Shalt Consume,” and that these two commandments contributed to planned obsolescence, instability, “technological drivenness,” and to making any religious or moral restraint on wants outmoded.

But it was the “energy crisis” of the 1970s, set off by a 1973 OPEC oil embargo and rising gasoline prices, which really got us Americans thinking about our “thou-shalt-consume” lifestyles. That same year Small Is Beautiful by the German-born Englishman Schumacher appeared, complete with statements like the following.

“The cultivation and expansion of needs is the antithesis of wisdom.”

“An attitude to life which seeks fulfilment in the single-minded pursuit of wealth—in short, materialism—does not fit into this world, because it contains within itself no limiting principle, while the environment in which it is placed is strictly limited.”

“The greatest danger . . . is a continuation of rapid growth in oil production and consumption throughout the world.”

“The consumption of fuel on the indicated scale . . . would produce environmental hazards of an unprecedented kind.”

“Assessments vary about the length of time that will elapse before fossil fuels are exhausted, but it is increasingly recognised that their life is limited and satisfactory alternatives must be found.”

“Life devoted primarily to the pursuit of material ends . . .  sets man against man and nation against nation.”

His book was a popular success in the United States and other nations, and he gave lectures in various countries. One individual impressed by his book was President Jimmy Carter, who in 1977 invited him to the White House, where he conversed with the president.

Shortly after the meeting, two U.S. senators wrote to Carter, “We were very pleased to notice that you had a meeting with Dr. E. F. Schumacher on Tuesday, March 22. We have long believed that Dr. Schumacher’s ideas are the key to environmentally benign, energy conserving development in this country and abroad.” Another politician influenced by Schumacher’s ideas was Governor Jerry Brown of California, who at Schumacher’s funeral in 1977 said that Schumacher was “a man of utter simplicity who moved large numbers by the force of his ideas and personality. He challenged the fundamental beliefs of modern society from the context of ancient wisdom.”

In 1979, President Carter gave a speech to the American people that reflected some of Schumacher’s ideas. Most notably he said, “In a nation that was proud of hard work, strong families, close-knit communities, and our faith in God, too many of us now tend to worship self-indulgence and consumption. Human identity is no longer defined by what one does, but by what one owns. But we've discovered that owning things and consuming things does not satisfy our longing for meaning. We've learned that piling up material goods cannot fill the emptiness of lives which have no confidence or purpose.” Carter also went on to propose what he called “a bold conservation program to involve every state, county, and city and every average American in our energy battle.”

In his recently publishedAmerica's War for the Greater Middle East: A Military History, Andrew Bacevich has taken a new look at this speech and written that it “bears comparison with Abraham Lincoln at his most profound, Woodrow Wilson at his most prophetic, and Franklin Roosevelt at his most farsighted.” But Bacevich, a career Army officer before retiring, also notes that it soon received harsh criticism from various sources including conservatives such as Ronald Reagan, George Will, and Irving Kristol, the “godfather of the emergent neoconservative movement.”

But even more crucial than the drumbeat of criticism in halting a reexamination of our consumption-addicted ways was the U.S. response later in 1979 to the Soviet invasion of Afghanistan. As Bacevich points out, many of us feared, incorrectly as it turned out, that the USSR intended it as step toward the Persian Gulf and control of the gulf’s oil resources. In his January 1980 State of the Union Address, Carter stated:

The region which is now threatened by Soviet troops in Afghanistan is of great strategic importance: It contains more than two-thirds of the world's exportable oil. The Soviet effort to dominate Afghanistan has brought Soviet military forces to within 300 miles of the Indian Ocean and close to the Straits of Hormuz, a waterway through which most of the world's oil must flow. The Soviet Union is now attempting to consolidate a strategic position, therefore, that poses a grave threat to the free movement of Middle East oil.

Furthermore, Carter “inaugurated America’s War for the Greater Middle East,” a war that has continued in such areas as Afghanistan, Iraq, and Syria from 1980 to the present. He did so by saying: “An attempt by any outside force to gain control of the Persian Gulf region will be regarded as an assault on the vital interests of the United States of America, and such an assault will be repelled by any means necessary, including military force.”

Bacevich’s conclusion is that this U.S. decades-long war was one “to preserve the American way of life, rooted in a specific understanding of freedom [the freedom to consume at affordable prices] and requiring an abundance of cheap energy.”

During the Reagan two-term presidency in the 1980s, Schumacher’s concerns that our “modern economy is propelled by a frenzy of greed” and was inflicting unacceptable environmental damage receded into the background. More typical was the “greed is good” philosophy expressed by Gordon Gekko (played by Michael Douglas) in the 1987 film Wall Street. Reagan also hobbled the Environmental Protection Agency.

Reagan’s successor, the first President Bush, had the oil-loving Dick Cheney as his secretary of defense, and Cheney oversaw our first war against Iraq (Operation Desert Storm) in 1991. Before returning as the second President Bush’s vice president in 2001 and helping to inaugurate a much longer war against Iraq, Cheney served from 1995 to 2000 as chairman and CEO of Halliburton, a major oil field services company with extensive Middle East dealings.

Although the two Democratic presidents, Bill Clinton and Barack Obama, who served after 1980 displayed more environmental concerns, they did not challenge in any major way our U.S. lifestyle of high consumption and energy usage. And in different ways they both continued, if less aggressively than the second President Bush did, what Bacevich calls “America’s War for the Greater Middle East.” Meanwhile, one result of the world’s high-energy consumption and ever-increasing production of consumer goods, global warming, continues to increase and threaten us all with future catastrophes.

Of the two remaining major contenders for U.S. presidency in this year’s election, Hillary Clinton has expressed far more concern about the environment than has Trump, but she has displayed few signs of pursuing a more pacific Middle East policy than President Obama or of discouraging the high-consumption lifestyle that so many of us regard as almost a God-given right. (Bernie Sanders is more sympathetic to the ideas of E. F. Schumacher, and he recently arranged for the appointment of environmentalist and Schumacher admirer, Bill McKibben, to the Democratic National Committee.)

Most contrary, however, to the ideas of Schumacher is Trump, whose presidency would represent a Schumacherian nightmare. Whereas Schumacher suggested that we scrutinize “our needs to see if they cannot be simplified and reduced,” Trump epitomizes the opposite philosophy.

According to a 2015 Business Insider article, “Trump's [New York] penthouse has a gold- and diamond-covered door, an indoor fountain, a painted ceiling, and an ornate chandelier.” “When Trump gets tired of his cosseted New York abode, he hops on his $100 million Boeing 757 and jets to one of his other mansions.” “The jet's seat belts are plated in gold.” In 2015, he also “spent a reported $750,000 on the redesign” of a Trump helicopter, which includes plenty of 24-karat gold plating.” “When he's not in the air, Trump motors around in his fleet of luxury cars.”

Not only does his personal lifestyle defy Schumacher’s advice to simplify needs, but the energy policies he advocates would further harm our planet. According to a Washington Post editorial, his energy plan “would lead to dirtier air and water—and to a massive blow to the global fight against climate change”—he has said that he is “not a great believer in man-made climate change.” In his plan, he promises to “cancel the Paris Climate Agreement and stop all payments of U.S. tax dollars to U.N. global warming programs.” He also declares that “American energy dominance will be declared a strategic economic and foreign policy goal of the United States.”

Bacevich’s book on our Greater Middle East wars demonstrates well how our high-energy-consumption lifestyle helped lead us into these wars. Trump’s insistence on “American energy dominance” and his “Odd Fixation on Seizing Middle Eastern Oil Fields” (as one mid-2015 magazine article labeled it) indicate he would not be inclined to encourage simpler lifestyles in the interest of peace.

If Schumacher is correct that our high-consumption, energy-addicted ways can lead to environmental devastation, if Bacevich is correct that maintaining this way of life has helped led to many U. S. military deaths abroad, then Donald Trump is not the person we should want to install as president. His promise to “make America great again” is nothing more than empty rhetoric, the flimflamming of a fool.