John L. Godwin is an unemployed history instructor, former editor of Carolina Civic Voice an alternative viewpoint magazine, the author of numerous articles and of "Black Wilmington and the North Carolina Way: Portrait of a Community in the Era of Civil Rights Protest" (2000). 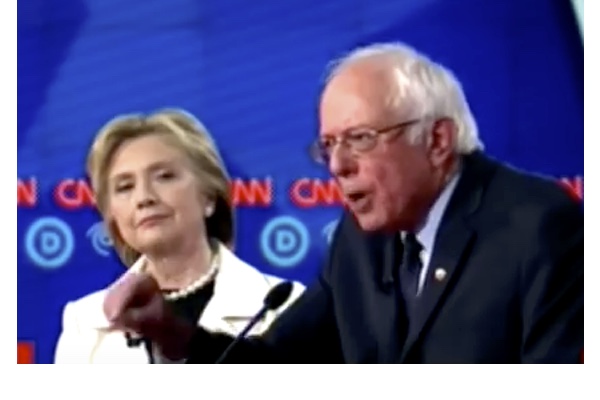 These days I will have to admit that I have somewhat had my wish fulfilled in the campaign by Bernie Sanders and his followers. Back in the 1990s it seemed that that the Democratic Party in the South above all needed a social democratic insurgency that would mobilize communities and pull people together from all directions. It would grasp the historic shortcomings of government in the region, understand the need for political education, perceive the need to build the economy from the ground up, and above all actively respond to the human condition. So when I first heard that a local group planned to hold a public gathering here in Wilmington, N.C. on Sanders’s behalf, I got that on my list, went to the meeting, and signed up to work for the insurgency. I even bought my “feel the Bern” t-shirt and wore it around town. Sanders spoke with passionate concern for the growing numbers of Americans today who have been locked out of full participation in the economy by persistent favoritism toward the larger corporate interests. The forgotten man, woman, and child, whom no one else would speak for, seemed at last to have an advocate.

All of this of course seemed to be confirmed by those lessons of history which pertain directly to North Carolina. Democracy in the U.S. since Theodore Roosevelt has been premised on an assumption bequeathed to it by Jefferson and Lincoln—that government must actively respond to the problems that affect people and shape their experience. Through the twentieth century, U.S. democracy became ever more dynamic as it sought to address the abuses of corporate wealth and a laundry list of needs: the need for a stable currency and an expanding money supply to meet the needs of all people (not concentrating the wealth within a few New York banks), the need to underwrite the economic security of the nation, the need to enfranchise women and protect children from extreme poverty and abusive exploitation, and the need to respect the rights of trampled minorities and to include and restore the human dignity of African Americans, American Indians, and Hispanics, while making religious freedom and social security into realities as much as possible in a merely human world.

In the 1930s, Franklin D. Roosevelt became a social democrat when he chose to embrace the cause of industrial workers, impoverished farmers, and business men whose shattered fortunes were the result of unlicensed speculation and an unregulated marketplace. Public money was spent for the first time by a national government not merely for war or national defense, but to lay the foundation for a dynamic economy. The Roosevelts campaigned vigorously in the South, and Eleanor Roosevelt became an enlightened social democrat by addressing the problems of the region, building consensus for better education, public health, and the need to embrace social reforms.

As time wore on and the political race between Sanders and Hillary Clinton began to unfold, I noticed a couple of things. First, Sanders did not mount much of a campaign in the South, a place where he seemed to feel uncomfortable. Typically southern workers show no allegiance to the ideological principles that Sanders tends to invoke. Rather than speaking to southern workers as they are Sanders chose early on to write them off for belonging to a conservative region that somehow exists apart from the national experience. But voters in the southern states are also Americans, and the collective weight of their ballots carries political force.

Second, in the Clinton-Sanders debates, I noticed a tendency on the part of Sanders to return to a refrain. Democratic socialism will put an end to the abuses of the capitalist system. Wall Street, the arch villain, is responsible for the problems that beset the nation. And Wall Street can be dealt with by breaking up the six big banks, ending “too big to fail” while banning speculation and making higher education free for all. While I respect Sanders and admire the intensity and his economic focus, I think we will have to accept the economic diversity of the nation, which Wall Street tends to reflect. Though dominated by excessive wealth, by multinational corporations, and by assumptions too often hostile to the public good, Wall Street doesn’t end there. Essentially it is a marketplace for millions of people, and thousands of corporations diverse in their livelihood. It is about as American as baseball, Kwanzaa, or the Mormon Church. I don’t play baseball, don’t celebrate Kwanzaa, and I don’t attend the Mormon Church, but I accept them as part of a complex America made up of people like me.

Another thing I noticed in the debates is that the visionary idealism of Sanders tended to bring out another side of his opponent, Hillary Clinton. At times Mrs. Clinton seems to present herself as a something of a feminist ideologue. I was impressed therefore, to see her willingness to embrace moderation, showing a liberal tolerance for the existence of wealth along with determination to promote the middle class, a recognition of business and the political process as a means to achieve the kind of reforms that this country needs. As a social democrat, I accept the need for broad regulatory protections for Americans in the marketplace. It should be both inclusive and essentially fair, and should embrace the cause of workers, farmers, minorities, women and consumers, a sustainable environment that respects nature, while avoiding those infringements upon liberty and freedom of expression that are the common lot of societies where fanaticism has become a popular mania. Living in a post-Cold War era, I recognize the horrific abuses of the totalitarian states, the screech of the loud speakers, the ranting slogans, where violent condemnation of the capitalist or the Jew went with the whiff of gunpowder, the blood spattered fields where mass executions became reality, and the rotting flesh and the stifled screams in the gulags of Soviet Russia or today’s North Korea. Too often it seems, when we profess of ideas of liberal government, we somehow become meekly accepting of such abuses.

Here in the South, we have had more than our share of people locked out, subjected to the outrage or indifference of government by and for the merely privileged. And we have had more than our share of crass demagogues pandering to ignorance while inciting people to commit crimes. Here in North Carolina, conservatism has long held out the promise of stability, reasonable order, and respect for traditions that convey a sense of human decency. But today’s conservativism has brought few of these virtues, while on the whole a return of the mummies has been the rule. Rigid economic conservatism has been their battle cry, the belief that wealth trickles down from the rich, that poverty is as inevitable as rain, that scorn for the environment is intelligent, and that leadership is handed down through moralistic declarations. Hence we have seen a return to sectional indifference, to zero public dialogue, to legislative tricks, disdain for the discipline of history, while giving credence to the assumption that what is good for Duke Power is good for North Carolina. The Dixie demagogues were well known for their willingness to pit blacks in opposition to whites, for adherence to the meanest kind of religion, making the southern states typically last in public health and responsive education, while workers earned the lowest wages and the smaller farmers were made to do without. In the South, the recent trends under conservative governance have already blazed a path for the newest demagogue on the scene, Donald Trump, who has found his surest comfort in the southern voter.

Democracy in the U.S., as I see it, cannot afford to abandon this region to the likes of Trump and his deluded, manipulated following. Democracy here grew from its beginnings in the constitutional republic created by the founders, especially because of their reverence for the common good and for public opinion. Perhaps it was an accident of history, the jealous rivalry of powers between the big states and the little states that required them to strike a bargain to create the union. But it required statesmanship, both the knowledge and the willingness to find common ground to create a way forward for a diverse nation. In a democracy where public opinion is of the essence, there will always be a place for the inspired visionary, but only a statesman can unite a nation by speaking to the whole of its citizens. Hillary Clinton demonstrated that quality by refusing to give up on the voters of the region, by searching for common ground even when catch phrases and pat formulas seemed to capture the most attention. When the time came to vote in the North Carolina primary, I marked my ballot for Hillary Clinton. I am hopeful that she will work responsibly to engage the people of my state and the region to build the socially enlightened democracy that is befitting of this nation.