Fear of Outsiders Is an American Tradition

by Guenter B. Risse

Guenter B. Risse, MD, PhD, is emeritus professor of the history of medicine at the University of California, San Francisco, and currently Affiliate Professor, University of Washington. With wide interests in the evolution of modern medicine, he is the author of several books, including Mending Bodies, Saving Souls” A History of Hospitals (Oxford University Press, 1999. His latest book is Driven by Fear: Epidemics and Isolation in San Francisco’s House of Pestilence (University of Illinois Press, 2016). 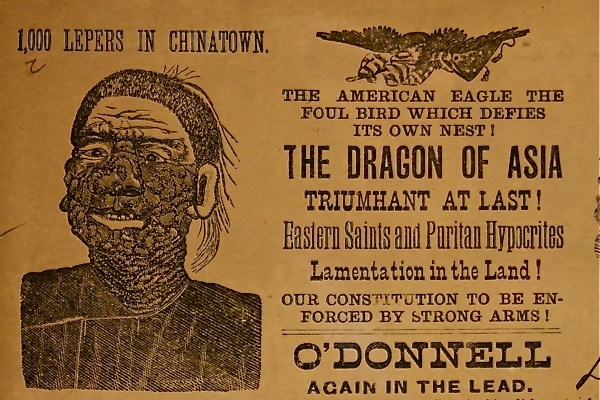 On the morning of September 19, 1878, Charles C. O’Donnell, a physician with dubious credentials and the leader of the rabidly racist Anti-coolie League, seized a Chinatown dweller grotesquely afflicted with highly visible leprous sores. Forcing the man to mount an open delivery wagon, this practitioner turned politician proceeded to parade the disgraced individual through the streets of San Francisco. Stopping at several key downtown intersections before reaching Market Street and reaching the swanky Palace Hotel, O’Donnell harangued a growing and terrified crowd, emphasizing the great danger of contagion posed by his repulsive “moon-eyed leper ” At the same time, pamphlets were distributed featuring the drawing of a Chinese face ravaged by the disease and proclaiming the existence of “a thousand lepers in Chinatown.” 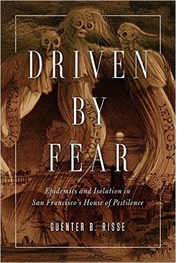 Awareness of dangers, real or imagined, is largely based on assumptions derived from past exposures. Since emotions are essential forms of human experience, they are central for understanding human behavior and survival. The highly visible horrors of bodily corruption, notably infectious scourges like smallpox and leprosy, prompt aversive sentiments and even flight. Physical decay can easily be linked to moral failings. Trumping reason and knowledge, anxiety, dread, and disgust were seen as protective responses beneficial for survival. The history of emotions can offer valuable assistance in understanding America’s persistent fears regarding threats of epidemics, including bioterrorism. Their role must be more fully explored and inform our current beliefs and behavior. As ethicist Arthur Caplan recently reaffirmed, “there is a long, sad and shameful tradition in the United States in using fear of disease, contagion, and contamination to stigmatize immigrants and foreigners.”

Since most activities in the United States devoted to the public’s health are local, historical case studies can serve as cautionary tales, particularly in an era in which our government has attempted to nationalize and militarize sanitary measures to achieve “bio preparedness” in the event of natural or terrorist-inspired contagion. Complex and often contradictory, our feelings toward the perils of mass disease should be illustrated with past examples of societal responses to deadly eruptions. They chronicle the plasticity and contingency of emotion-driven behaviors as they influenced the moral and political judgments that human beings made in confronting and seeking to control contagious diseases.

Prompted by xenophobia and overt racism, the United States has traditionally sensationalized “invasions” of foreign infectious diseases, blaming arriving weak or unhealthy “others,” for their appearance and transmission. Delving into the spectrum of emotions that drove Americans to harsh measures like segregation and isolation is illustrative. Fed by psychological, ideological, and pragmatic urges, these efforts succeeded in scapegoating and stereotyping victims-of smallpox, leprosy, tuberculosis, plague, and syphilis since the seventeenth century. In the name of public safety, such prejudice and stigmatizing loathing continues to be a key component of our widespread anti-immigrant sentiments and the use of invasive screening procedures surviving into our own day. A notable example in late 2014 was the crisis caused by the arrival of Ebola fever victims from West Africa.

One can speculate that such strong and negative emotions are rooted in experiences reaching back to the earliest conquest and colonization of what was believed to be a pristine and healthy American continent. Unfortunately, the first contacts between indigenous people, conquerors, and settlers lead to the involuntary spread of deadly endemic European diseases conveyed by the new arrivals. Measles, chickenpox, diphtheria, and whooping cough were relatively mild in their countries of origin, occurring mostly during childhood. In sharp contrast, these imported scourges—notably smallpox—quickly overwhelmed and decimated America’s adult population exhibiting genetic uniformity and immunological incompetence. Pre-Columbian empires declined or were destroyed, with depopulation forcing the introduction of slaves from Africa afflicted with their own equally fatal cohort of tropical diseases like malaria and yellow fever, all ostensibly sullying the Promised Land. In fact, the former often ravaged the remaining aboriginal population.

In Colonial America, fear, disgust, and paranoia shaped responses to imported smallpox in Boston after 1636, notably the Salem witchcraft proceedings. Most key eastern seaports set up quarantine “houses” in their harbors next to facilities for the disinfection of cargo. Boston built such a dwelling on Spectacle Island in 1717, a few years before the devastating epidemic of 1721. Charleston, center of the African slave trade, sponsored since 1712 several pest houses on Sullivan Island for the protection of its population; Savannah’s lazaretto was erected on Tybee Island in 1768.

Analogous to endeavors in the political and social realm, the birth of a new and free nation—the United States—generated enthusiasm for protecting and improving the wellbeing of its citizens. “Good health” enhanced the quality of life and became an integral part of the new nation’s identity; it was essential that all risks and threats with the potential of impairing needed to be forcefully thwarted. In fact, during the early years of the Republic, physicians attempted to frame a distinctly national “American” health and medicine then under threat from lethal epidemic outbreaks of yellow fever in prominent city-ports along the Atlantic seaboard and the South. During the epidemic in 1796, the new American republic temporarily enacted a federal quarantine law to assist the states, but the power to control and manage communicable diseases was mostly delegated to local authorities.

Spread by increasing flows of European immigrants during the nineteenth century, periodic epidemic of cholera came to afflict larger population centers such as New York. New threats like leprosy and plague originated in Asia, blamed on hordes of “uncivilized” Chinese migrants. Indeed, as analyzed in my earlier book Plague, Fear and Politics in San Francisco’s Chinatown (Johns Hopkins University Press, 2012), the specter of this “yellow peril” drifting towards the rest of the country fueled the flames of American nationalism and racism, spreading panic in California and beyond. Not to be outdone, imported venereal syphilis would cripple a vibrant generation of white men, jeopardizing the country’s future manhood. To counter the threats, a ring of quarantine stations from Boston to Seattle sponsored by an expanded federal Marine Hospital Service sought to guard the nation’s health, stopping scourges at its borders from “dense and vitiated” populations from southern Europe and the Orient.

A new century continued to sustain similar foreign risk prejudices and assessments during the 1918 flu pandemic, a disaster blamed on a surge of European migrants. Tuberculosis was associated with arriving Jewish tailors while Italians and Polish arrivals were responsible for spreading poliomyelitis. Not to be excluded were Mexican newcomers, repeatedly denounced for bringing tropical scourges such as dengue fever, hepatitis, parasitic diseases, and periodically even leprosy. For a while, Haiti was incriminated in the origin of HIV/AIDS. SARS came from China. Foreign risks still tend to be vastly exaggerated and panic a poor problem-solver. A notion that such diseases are primarily associated with poor and marginalized illegal immigrants persists. They stand accused of invading the country to re-conquer it by making Americans sick and eroding Anglo-Saxon culture. The fear mongering continues.