The Disconcerting Reason We Aren’t Racing to Embrace Syrian Refugees

Bethany Sharpe is a PhD candidate at the University of Kentucky. 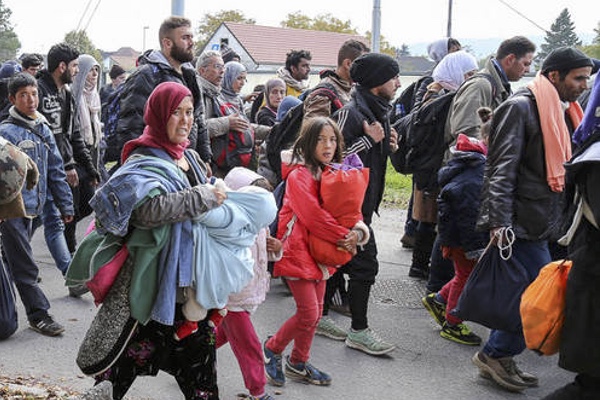 In the wake of the recent tragic attacks in Paris and San Bernardino, both supporters and critics of the United States Syrian refugee policy are trying to untangle our country’s moral obligation to help those in distress from diverting and managing the threat of another terrorist attack.

Donald Trump’s plan to stop Muslims from entering the United States, in effect ending protection for Syrian asylum seekers, is only the newest packaging of an old tradition. To blame GOP rhetoric and the most current terrorist attacks in Paris and San Bernadino for the present hesitation in refugee policy only obscures a pattern of ambivalence toward refugees. Past humanitarian responses reveal that the current reluctance to aid Syrian refugees is par for the course.

One need only look at the spotty history of Ronald Reagan’s refugee policy antics to understand how deeply flawed is the idea of the United States as a benevolent protector; the Sanctuary Movement of the 1980s provides a dramatic example of just how hesitant the U.S. has been to extend aid. Furthermore, though Trump’s connection between terrorists and able-bodied male refugees capitalizes on prevailing fears, this is certainly not the root cause for American intransigence, which has shown up in both the Republican and Democratic Parties. The ambivalence toward refugees and asylum seekers has less to do with able-bodied male refugees than with the significant numbers of women and children who comprise the bulk of refugee movements. Indeed, the anxiety around the age and gender of migrants, whether refugees or otherwise, culls from a deep cultural well of suspicion of children and women. To suggest that the U.S. should return to its deeply valued humanitarian behavior is nothing more than a means of deflecting important questions about this country’s questionable humanitarian record.. Even when reports fail to bear out Trump’s claim that most refugees are able-bodied males, the plight of the women and children who comprise the bulk of refugee movements has inspired little action.

One way to think about U.S. ambivalence is by looking at the role of children. Public rhetoric claims to cherish and esteem the innocence of youth and seek out justice when that innocence has been deemed corrupted. Yet not all children seem to fall under this rubric of youth as innocent. Some children, who are believed to transgress racial, gender, and economic boundaries, are considered dangerous. In extreme cases, they are even considered disposable like those of the “Guinea Pig Kids.” Beginning in the 1980s and running through 2002, the Administration for Children’s Services in New York City colluded with pharmaceutical companies like GlaxoSmithKline to administer experimental drug tests on HIV positive black and Latino children in the city’s foster care system. Because the children were under the care of the state, the tests were conducted without proper parental, caregiver permission. The state determined that the tests served the best interests of the child.

Reports of the Syrian crisis often focus on children, often very small ones. Though photos of children being lifted across razor wire to find security would seem to touch a chord and compel a moral dialogue, they don’t. Such depictions play on lingering fears of the potential danger housed within those small bodies and inspire comments like those spoken by Dr. Ben Carson in the most recent CNN debate. He suggested that a war producing thousands of casualties, many of them children, would be more “more merciful if you go ahead and finish the job.” Carson’s sentiments are clear: such a war is merciful because Syrian children are the wrong kind of children worth saving. Even the tragic, heart-breaking death of 3-year-old Aylan Kurdi as he fled with his family to Vancouver, B.C. brought only a momentary pause in U.S. reluctance to provide protection. The tears and hand-wringing caused by his death were soon overshadowed by the more insidious fear that some children might be dangerous.

The inclination to take a dualistic view of children –denoting some as good and some as bad – helps make sense of United States policy. Children hold a vast amount of potential, but there is no guarantee as to what that potential holds – it’s a bit like playing Russian roulette. Refugee children are seen as particularly unstable given the amount of trauma they have experienced and the often dire, demonized conflict situations from which they’re fleeing. Speaking back in November, before the San Bernardino attack, GOP presidential candidate Chris Christie spoke explicitly of this dual nature of children when he suggested that the US should not even let in a five-year-old orphan seeking asylum. His statement reflects fears that children from demonized cultures may harbor aggressive feelings, turning them into the next scary gun-toting, bomb planting terrorist.

While the fear of terrorism has produced the most recent and visible knee-jerk reaction to the admission of refugees, the long pattern of hostility to refugees reflects deep American fears about women and children. These fears have repeatedly prompted the United States to shirk its humanitarian responsibilities. Only when observers and interested participants come to terms with both the ambivalence of U.S. humanitarianism and its root causes can we have an honest reckoning of how the US actually values human life.