Reagan Welcomed Hundreds of Thousands of Boat People. And Today the GOP Is Demonizing Refugees?

Joe Krulder, PhD., is an adjunct instructor at Yuba College in Marysville, California, and at Butte College in Oroville/Chico, CA. 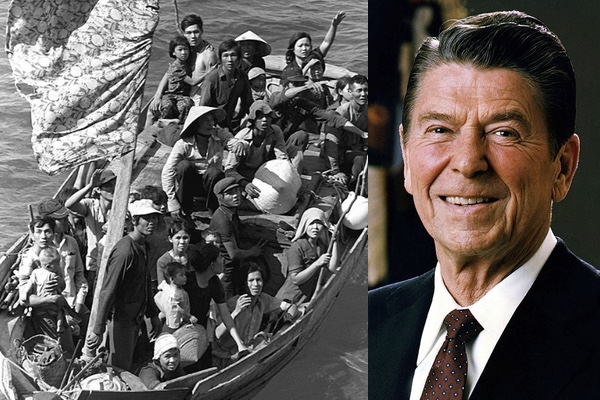 In 1989, President Ronald Reagan’s farewell address referenced a refugee crisis which lasted throughout his presidency and beyond: the “boat people” of Indochina. In the wake of America’s involvement in Vietnam, perhaps as many as 2-million Vietnamese, Laotians, and Cambodians began to flee repressive regimes beginning in 1975. It took twenty years for that refugee crisis to end.

Reagan faced the cameras and told of “the carrier Midway, which was patrolling the South China Sea.” Here, “a leaky little boat” was crammed with “refugees from Indochina hoping to get to America.” When refugees met with sailors from the USS Midway, one cried up, “Hello, American sailor. Hello, freedom man.”

Bottom line, the Gipper’s version of America welcomed these “boat people.” According to Reagan, the Pilgrim’s promise, that “beacon on a hill,” would light the way. “And she's still a beacon,” claimed Reagan, “still a magnet for all who must have freedom, for all the pilgrims from all the lost places who are hurtling through the darkness toward home.” Reagan’s farewell address may seem idyllic, perhaps even Hollywood-esque, but his words are nonetheless important. To Reagan, “freedom is special and rare,” and no wonder the refugees of the world, then the “boat people,” wanted to come here.

What a contrast between Ronald Reagan’s response to an ongoing refugee crisis and that of the current GOP. The United States, through operations such as the Orderly Departure Program, took in nearly half-a-million “boat people” refugees. As of last month, the United States has committed to resettle but 10,000 from the Islamic civil wars playing out in Syria and Northern Iraq. In other words, the Great Communicator’s response to refugees fleeing the repressive regimes of Indochina was for the United States to accept nearly a fourth of them. If the United States was to follow in the footsteps of those resettlement programs, this country would promise to absorb approximately 1.3-million Syrians.

But even the paltry number of 10,000 committed to by the Obama administration is considered too high by thirty-one states, thirty of them led by GOP governors who, in November of 2015, have refused to welcome them (whatever that means and however that plays out legally).

I don’t mean to belittle the complexity of the Syrian Civil War, or the GOP response to it: there are, after all, a dozen sides fighting for control (ISIS, Assad Regime Loyalists, Hezbollah, Kurds, Russia, Iran, Turkey, al-Qaeda through the Jabhat al-Nusra, the U.S.-backed Free Syrian Army, the Islamic Front supported by Turkey and the Gulf Arab states, and now France and the UK). Caught in this crossfire are millions upon millions many of whom have chosen to flee.

Much was the same in 1975 after the U.S. withdrew from Vietnam. The communist backlash in Indochina was horrific. The Khmer Rouge killed off nearly a fourth of its own population in the “Killing Fields.” The Laotian communists, under the Pathet Lao regime, also committed atrocities and ultimately genocide against its Hmong people. The Vietnamese communists were equally oppressive against the Hoa people in South Vietnam.

While it is true that many of the wealthy Gulf Arab states remain opposed to refugee resettlements within their borders, much the same was true during the “boat people” crises of 1975-1995. Indonesia, Thailand, Malaysia, Hong Kong and China, Singapore, and the Philippines all took hard-line stances against accepting the “boat people.” It was the more developed nations: the United States, Canada, Australia, France, Germany, and the United Kingdom that took most of them in.

This time, with over 6-million fleeing the Middle East, it is Turkey that has borne the brunt, placing over 1.2-million in refugee centers. Germany has committed to resettling over 1-million. France, despite the Paris Attacks, remains pledged to accepting 30,000.

In this historical context, the current United States response to the Syrian crisis seems appalling. In his farewell address, Reagan claimed that during his eight years the country experienced “the recovery of our morale. America is respected again in the world and looked to for leadership…”

But today’s GOP presidential contenders, who spout little but fear and demagoguery, stand in stark contrast to Reagan’s “new patriotism” where actions and deeds are “grounded in thoughtfulness and knowledge.” Instead, current GOP politicos appear more knee-jerked and reflex-riddled.

The “boat people” refugee crisis should remind us about, of all things, ourselves. Whether conservative or liberal, the U.S. response to people fleeing from Indochina was viewed as the United States at its compassionate best. And it should guide us and direct us through the great Syrian refugee crisis of today.

Last, President Reagan warned America during his farewell address that the “eradication of the American memory… could result, ultimately, in an erosion of the American spirit.” We must remember our compassion. We can and should do better.