Deny Syrian Refugees Entry to the US? We’ve Been Here Before. 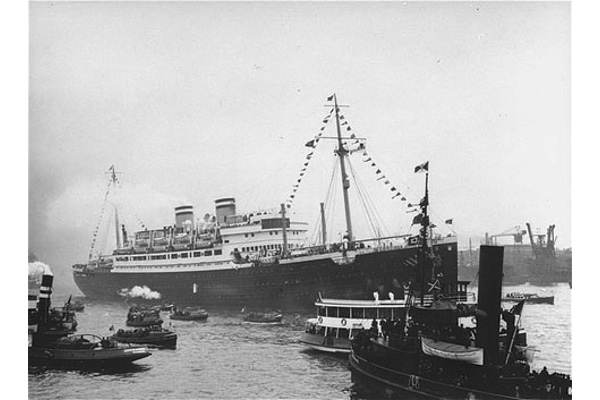 Jews denied entry into the US

Discrimination against immigrants or refugees based on religion isn’t new in the U.S. It happened to my family almost 100 years ago.

In the late 1920s, my father, then a teenager, left Ukraine with his mother and brother, following his father to the United States. In Ukraine, they had no civic rights or protection because they were Jews.

A little over a decade later my father and mother, a native of Richmond, Virginia, married. Because they were Jewish, they were not permitted to rent an apartment in their first-choice location.

Around this time, almost a thousand Jews, fleeing Nazism aboard the MS St. Louis, were denied entry into the United States. They were sent back to Germany, where they faced the same dire fate as millions of other Jews, none of whom could gain entry into any major Western country.

About 15 years after that, I entered a brand-new elementary school, just across the street from a “restricted” area—where homeowners were forbidden to sell to Jews and Blacks. At this time, the early 1950s, major academic institutions of higher learning in the United States were still severely restricting the number of Jewish students they would admit and the number of Jewish faculty they would hire.

Maybe you or, more likely, earlier generations of your family, never faced harsh conditions in your country or countries of origin. Maybe your family traveled from there to here first-class, with no obstacles and no impediments.

Maybe, but I doubt it. We correctly speak of the United States as the land of immigrants. But we could just as well speak of ourselves as a land of refugees.

Now, it is true that not all immigrants to the United States were refugees, at least not according to legal definitions of the term that have sprung up over the decades. But let us speak rather in moral terms.

A denial of minimal rights, even when not accompanied by explicit threats of death or forced relocation, is something worth fleeing from. And a society based on equal access to justice and the recognition of inalienable rights that all of us should enjoy by virtue of our shared humanness—this is something, and somewhere, worth fleeing to.

Each day in our courts, defendants are presumed innocent unless found guilty. This is a precious and a fragile system that stands apart historically and morally from other forms of “justice.” In the process, we recognize that some guilty individuals will be exonerated not because they are innocent, but precisely because their guilt cannot be proven. This procedure entails risks, and these are risks that we as a society are willing to accept because it is part of the American way.

In like manner, we cannot ensure that no terrorist will enter, or has entered, our country under the guise of being an innocent refugee. We as a nation ought to accept the risk that here, as in our court system, there are no guarantees. But even in dire circumstances such as those we are experiencing now, we should err on the side of generosity—admittedly, responsible generosity.

To our shame, we have not always been as generous a society as we should have been. But to our national credit, we have on balance been far more generous than most other societies. May we always be a place worth fleeing to—as did so many of our ancestors—and never a land that people wish to flee from.