Why Trump Is Wrong on Immigration and a Surprising Fact

Alessandra Bazo Vienrich is a PhD candidate in Sociology at University of Massachusetts-Boston with research interests in immigration and race/ethnicity studies. Philip Kretsedemas, a professor at Mass Boston, is the author of The Immigration Crucible: Transforming Race, Nation, and the Limits of the Law and Migrants and Race in the US: Territorial Racism and the Alien/Outside. 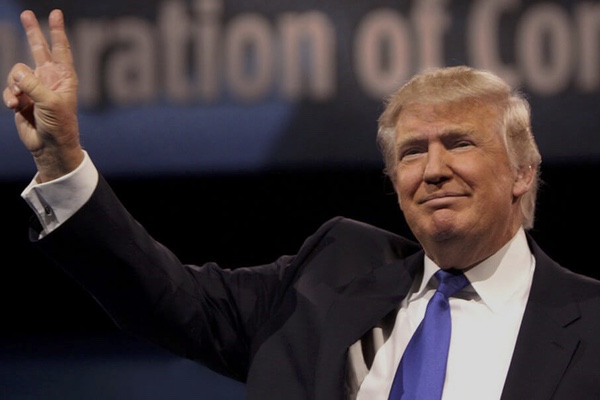 Does Donald Trump actually believe half the things he says in public?  One can’t help but feel that you’re being suckered into the Trump media spectacle by analyzing his statements as if they are intended as serious policy.  Nevertheless, it’s hard to avoid commenting on his proposal to “bring back” Operation Wetback; the infamous mass deportation program carried out under the Eisenhower administration; and one that is known for violating human rights.i

Granted, Trump made this statement over a week ago, at the Republican Presidential campaign debate—which may as well be a year in “political time.” The attentions of the media punditry have since been swept away by the recent, tragic events in Paris. But it’s worth noting that the Paris attacks have already inspired proposals for an all-out ban on US acceptance of Syrian refugees (with Trump leading the way on this issue). And since the media already have a track record of associating noncitizen populations with crime and disorder, it isn’t a far stretch to see how public fears of terrorist attacks could be translated into more generalized concerns about undocumented migrants.ii So although the discussion of Trump’s support for a mass-deportation program has been temporarily sidelined, it is an issue that will inevitably resurface in the weeks and months to come.

Trump’s proposal to deport the almost 12 million unauthorized migrants currently living in the US has been derided as completely impractical (and even “insane”) by a number of pundits.iii And we share this opinion. But Trump wouldn’t be generating the press coverage and approval ratings he’s been getting if he wasn’t tapping into a nerve in the US electorate. So it’s important to take a step back and reflect on the commonsense that this proposal appeals to, which is likely shared by a large, but often silent, cross section of the US population.

For starters, this commonsense presupposes that US borders are being over-run by undocumented migrants, but the facts show that this population hasn’t grown for the past eight years (and has actually shrunk a little). The US unauthorized migrant population reached a peak of just over 12 million in 2007, then it dipped down to about 10 million for a couple of years and has since experienced some moderate growth but without exceeding the pre-recession high of 12 million.iv It’s also worth noting that the peak growth years for the undocumented population coincide with a time of robust—though highly unequal—economic growth, between 2000 and 2007, when this population grew as much as 500,000 to 1,000,000 persons in a single year.v There has been nothing approaching the scale of this growth since the Great Recession, which suggests that labor market incentives (i.e. available jobs) have a lot more to do with the growth and retraction of the undocumented migrant population than the severity of immigration enforcement.

Similarly, it seems that anti-immigrant sentiment in the US has more to do with perceptions of the general state of economic affairs than the actual size of the unauthorized migrant population. For example, public opinion research has shown that Americans became less likely to. hide their opposition to immigration after the financial crisis of 2008.vi  Meanwhile, other studies have shown that anti-immigrant sentiments are largely predicted by concerns about the racial and cultural difference of immigrants—which can certainly be exacerbated by economic downturns but which persist even during the best of times.vii As Timothy Hatton and Jeffrey Williamson have succinctly put it, “Bad times breed immigrant hostility, even if immigrants have nothing to do with the bad times.”viii All of this has something to do with large number of Americans who sympathize with Trump’s views on immigration.

So this idea that we need a “new” Operation Wetback, belies the fact that – in many respects – Operation Wetback never really ended.  Of course, the Operation—as formally defined by the US government—started and ended in 1954, during which it removed about 1.1 million migrants.xi  But as Kitty Calavita explains, the Operation had a significant and lasting impact on the way the US government uses the border patrol, shifting it toward a more aggressive enforcement agenda.xii Prior to 1954, the Border Patrol were more likely to “look the other way” during times of peak labor market demands for Mexican migrant labor. After 1954, the Border Patrol reversed these priorities and started to intensify its enforcement actions during periods of peak labor market demand.xiii This more aggressive approach set the tone for the entire federal immigration system, which steadily expanded its border and interior enforcement capacities throughout the late 20th century.

By the late 1970s, immigration enforcement “caught up” to peak enforcement levels of Operation Wetback; starting a trend of removing about 1 million migrants from the US per year, which continues to this day.xiv  But whereas Operation Wetback involved the US military, the mass-scale removals of the current era are being carried out entirely by US immigration enforcement; being made possible by all the funding increases authorized by the US Congress, especially from the 1990s onward.xv

These funding increases have also given rise to a number of special operations with goals to similar to Operation Wetback, one of the most recent being Operation Streamline, which uses federal enforcement to prosecute unauthorized migrants for unlawful entry (and is the principle reason why Latinos are now the single largest racial-ethnic population in the federal prison system).xvi And the curious thing about all of this enforcement is that it coincides with the steady growth of the immigrant population; which is one reason why many scholars view these enforcement practices as a strategy for controlling immigrants (making them more compliant and exploitable) and not for restricting immigration per se.xvii

Now, back to Trump’s latest foray into immigration policy.  He will undoubtedly be admired—even by folks who don’t share his politics—for daring to say what “everyone” is thinking but afraid to say. But what really is so heroic about calling for an even more aggressive kind of enforcement to target one of the poorest populations in the US? Although Trump likes to play the role of the maverick, railing against the status quo, there’s nothing especially original about his immigration policy. All he wants to do is ramp up the existing status quo; which is using punishment and deportation (and seemingly endless spending increases on enforcement) as a comprehensive strategy for immigration reform.

Meanwhile, the only “maverick” thing that Trump demonstrated with his latest immigration announcement was his willingness to flirt with anti-Latino sentiments, by referencing an enforcement operation that is widely known to have targeted Mexican migrant workers. Trump didn’t actually say “Operation Wetback” and, arguably, he didn’t have to in order to get his point of across (which has been made more baldly by the likes of Samuel Huntington and Peter Brimelow).

The call for a mass-deportation program is premised on the idea that there are too many of “them” here, and Trump’s not-so-oblique reference to Operation Wetback invites confusion about the “them” he is talking about: unauthorized migrant workers? Mexican unauthorized migrant workers? Mexican migrants in general? Mexicans or Latinos in general? Operation Wetback catered to a similar confusion, enabling a kind of enforcement that, in some cases, led to the arrest and deportation of Mexican-born persons with a “supposedly” secure US legal status—including naturalized citizens.xviii And this all contributes to the racist tautology: Mexican = illegal = Mexican.

If you view things in this light, it doesn’t really matter whether Trump’s proposal for an (even more intensive) mass deportation program is logistically feasible. What Trump is doing, beyond providing recommendations for immigration enforcement, is offering the US public yet another scapegoat population that can be legitimately branded as outsiders in our new “post-racial” (and soon-to-be post-Obama) America.

i For an account of migrant worker deaths that were a result of enforcement round-ups carried out under Operation Wetback see Mae Ngai, Impossible Subjects: Illegal Aliens and the Making of Modern America, (Princeton, NJ: Princeton University Press, 2004), p. 156.

xi Kitty Calavita, Inside the State: The Bracero Program, Immigration and the INS (Quid Pro LLC, 2010), 237.

xiv But noting that total number of removals and voluntary departures has dipped below 1 million in recent years due to the recession-era slump in border apprehensions (due to the decreased flow of unauthorized migrants). Philip Kretsedemas, The Transformation of US Immigration Policy,” in Harald Bauder and John Shields (eds.) Immigrant Experiences in North America (Toronto: Canadian Scholars Press, 2015), 60-92 at 72-74.