by Craig Werner and Doug Bradley

Craig Werner is a professor of Afro-American studies at the University of Wisconsin–Madison. Doug Bradley, a Vietnam veteran, teaches a course on the war with him. They are the authors of We Gotta Get Out of This Place: The Soundtrack of the Vietnam War (University of Massachusetts Press, 2015). 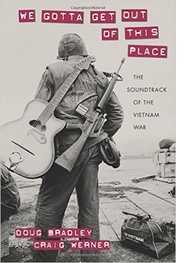 Flying over Vietnam's lush central highlands, buck sergeant Gordon Smith looked down from the C-7 helicopter and thought about the life he'd left behind in California. He'd lived a certain Sixties idyll, surfing, driving the winding coastal highways, cooking hot dogs on the beach, checking out Creedence Clearwater Revival, Janis Joplin, and the Doors at Winterland or the Sacramento Auditorium. As Smith savored a few minutes away from the grind of life at Bien Hoa, better known as “Rocket Alley,” he thought about his girlfriend Joanne, who he'd taken to the Fillmore to see Ike and Tina Turner while home on leave. And he mourned his best friend Rocky, who'd given him his first joint only months before he got the draft notice that landed him in an ambush near My Lai. Suddenly, Bob Dylan blasted into his reminiscence. "'Like a Rolling Stone' comes on," Smith recalled years later. "The rim shot and the explosion of the music. I could remember it from 1965 when we used to turn it up and stop everything to listen, but flying over Vietnam, out of bullet range, looking down at the war, nothing like it."

For Smith, Dylan's lyrics still sound the question that's echoed for a half century: "How does it feel to be on your own with no direction home, like a rolling stone?" If we want to understand the human realities of the war, if we insist that the soldiers matter, we have to take their connection with the music they listened to seriously. Too often, we reduce Vietnam to clichés with varying degrees of validity: a "noble cause" betrayed by protestors and politicians, a tragic "quagmire," or a descent into a mythic heart of darkness. As they have searched for their own answers, countless veterans shared Jeff Dahlstrom's reflection: "I couldn't have lived without the music."

For the more than three million veterans whose experiences are at the center of the 50th anniversary commemorations that began a year ago, music provided release from uncertainty, isolation, and sometimes stark terror. But the sounds offered more than simple escape. Music provided soldiers a lifeline to their homes, families, and the parts of themselves they felt slipping away. It was the glue for the communities they formed in their hooches, base camps, and outposts from the Mekong Delta to the demilitarized zone. Both in-country and "back in the world," as the troops called the United States, music helped them make sense of situations that made "Like a Rolling Stone" feel like a documentary. For the fortunate ones who found their way back home, music sounded the secret places where they stored memories they sometimes didn't share for decades. Music remained a tool for survival and a path to healing, the vibrant core of a human story too often lost in the haze of politics and myth.

One way of getting closer to the lived reality is to listen to the vets' stories. When we embarked on the more than 200 interviews that form the core of our book, we thought we were going to organize it around a Vietnam Vets' “Top Twenty," showcasing the songs that best reflected the vets' feelings and experiences. Before long, it was obvious that the story was much richer than we'd imagined. We'd need 200 songs, maybe 2000. And the vets weren't particularly interested in some of the songs that show up again and again in movies about Vietnam. They didn't dislike Edwin Starr's "War," but they didn't need to hear about what they were living. More than anything, they pined for the women they'd left behind. Again and again, their memories gravitated to "My Girl" or "Leaving on a Jet Plane." The Box Tops' "The Letter" resonated with lonely young men hoping they'd hear their names at the next mail call; Nancy Sinatra's "These Boots Are Made for Walkin'" connected with guys who’d trudged endless miles through hostile terrain. Her pin-up girl good looks didn't hurt. Any song about going home: Bobby Bare's "Detroit City," the Beach Boys' "Sloop John B," Martha and the Vandellas' "Jimmy Mack," and above all what one veteran termed the "Vietnam Vets' National Anthem," The Animals' "We Gotta Get Out of This Place."

The soldiers and vets didn't ignore politics, but they saw the issues from their own angles. In the States, Country Joe and the Fish's "I-Feel-Like-I'm-Fixin'-Do-Die Rag" drew harsh criticism from those who heard it as a disrespectful hippie joke. In Vietnam, soldiers tended to hear it as an example of the gallows humor that helped them soldier on. At home, Aretha's Franklin's "Chain of Fools" rang out as a statement of female assertion; after the assassination of Martin Luther King, Jr., more than a few African American vets transformed it into an angry rejection of the chain of command. At times, black, white, Chicano and Native American vets shared a soundtrack; everyone knew what Jimi Hendrix meant when he sang "There must be some kind of way out of here said the joker to the thief," then exploded into a guitar solo that captured the chaos of war. But sometimes music became a flashpoint for racial tensions as vets, particularly those outside combat zones, broke off into groups defined by their love of soul or country or hard rock.

The most important things we learned from the vets center on the power of music as a path to memory and its potential for helping to heal soul-deep wounds. Art Flowers, an African American vet from Memphis, testified to how listening to Marvin Gaye's What's Going On shook him out of a profound depression and set him on the path to becoming a "cyber-griot" dedicated to the cause of black and human freedom. Alfredo Vea, whose novel Gods Go Begging ranks with the most powerful novels about any war, turned to jazz as a way of improvising in the face of the sad truth that "war lasts long after the last bullet is fired; into old age and death we go carrying a secret knowledge that no one wants to know about."

That's something that links veterans of Vietnam with those coming home from Iraq and Afghanistan: the sense that no one wants an honest answer to the question that most don't even bother to ask: How does it feel? It's not a situation that can be answered with a perfunctory "thank you for your service" or a hackneyed political speech. The music doesn't provide a full answer, but it remembers, knows the story is deeper, more complicated and harder. Greeting card sentiments and bumper stick politics leave us in a place that fundamentally misunderstands the men and women who sacrificed so much. And like the song said, we gotta get out of that place.