I Had to Move After Exposing the Seamy History of the City of Decatur, Georgia

The intersection of history and social justice activism is fraught. I learned the hard way that writing about race, class, and bias in a community that places a high value on its image as a liberal, progressive, and diverse place carries unanticipated consequences and enormous costs.

Since I began writing about gentrification and history in Decatur, Ga., I have been threatened with arrest and endured four years of online harassment. Though at least one American historian I know of has had his life threatened because of his work – Robert Weyeneth has recounted death threats from Washington miners – I may be the only public historian who has a handful of cyberstalkers who have intruded upon professional dialogues carried on online and who have forced at least one professional organization to re-evaluate its online content commenting policies.

In October 2011 I wrote about a small home being demolished in Decatur’s gentrifying Oakhurst neighborhood. That blog post became the first of several that explored teardowns and mansionization in the Atlanta suburb. 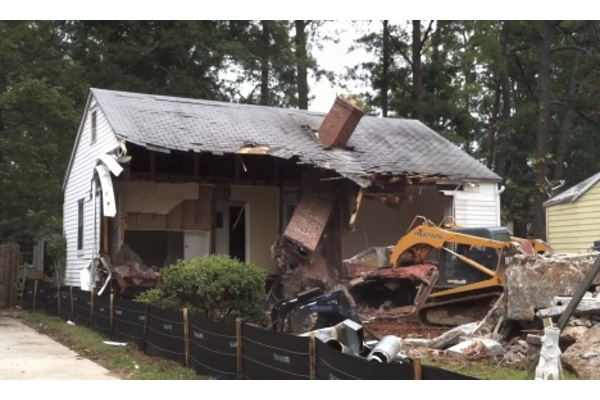 Decatur home demolished in 2011. Photo by the author.

After two additional posts were published, I received a call one evening from the local history center’s director. She told me that she had just been accosted by an angry Oakhurst resident who demanded that she ban me from her organization’s archive because he didn’t like that I was using it as a research resource. She declined his request.

By the following spring, I had written additional blog posts and an article in the history center’s newsletter. As a member of the community – drawn there, in part, by its reputation as a “liberal island of blue in a conservative red sea” – I believed that the white privileged rhetoric dominating local blogs and public meetings represented a vocal minority in the community.

As I became more aware of the displacement pressures elderly African American homeowners were facing I turned to the Internet to, as my wife wrote in a neighborhood listserv post, “shout fire.” I saw a nexus of adverse effects to the cultural and natural environments that turned on lax regulatory controls and exclusionary zoning policies. Predatory builders were pressuring elderly residents to sell and leave the neighborhood combined with the epidemic of small house teardowns and their replacement with substantially larger homes, a skyrocketing property tax burden, and school overcrowding.

Decatur, as I was quickly learning, had some closely held dark secrets and its residents and the people in elected and appointed office would go to great lengths to protect them. “I basically found that the attitude was that the history is, for the most part, everything is doing well,” said Tom Keating, the educator who documented Decatur’s anti-Semitic school calendar in his 1999 book, Saturday School: How One Town Kept Out "the Jewish," 1902-1932. “We’re a good city. We’ve made a lot of changes. We’ve moved on from some of the issues.”

Keating, a Decatur resident since the 1970s and a former school board member, found himself ostracized and marginalized by many in Decatur. He attributes it to the book and to exposing what he calls the city’s historical warts.

There’s an unbroken exclusionary line that connects Decatur’s past to its present. From the 30-year-long Tuesday through Saturday school calendar in the 20th century that kept observant Jews from living in the city to the urban renewal effort in the 1960s that sought to relocate more than 200 African American households [PDF] outside the city limits to the 2014 suggestion that children displaced by public housing redevelopment be barred from attending Decatur’s highly-rated schools.

Add to those the recognition as early as 2008 that housing affordability [PDF] was having a deleterious effect on Decatur’s most vulnerable residents and the city commission’s failure to act on mitigation recommendations by consultants it hired; the citywide historic resources survey that failed to mention African Americans or their historic places; and, a long and troubling history of civil rights abuses by Decatur’s police department that include contemporary racial profiling.

I was writing that the city’s policies and the people who live there could be construed as racist. Some residents strongly disagreed and they created pseudonymous social media accounts to set the record straight. One person calling herself “Oakhurst Villain” created a blog in the spring of 2012: “One of the purposes of this blog is to expose the inconsistencies and wrongheaded agenda of David Rotenstein,” she wrote.

“Mommyblogger,” a Decatur author whose online identities include “IHeartOakhurst” and “Alice Ambergoso,” posted a multi-page document she shared with Decaturites. Mommyblogger initially titled her 2012 document, “Rotenstein v. Decatur: The Truth.” She wrote,

David Rotenstein paints a picture of Decatur that is based on a very personal grudge rather than fact. His assertion that Decatur is chock full of nothing but vindictive white folks who hate old houses and African Americans simply isn’t accurate.

Mommyblogger went on to accuse me of stalking people and she closely monitored all of my online activity, frequently posting within minutes of something I had written. Her identity would have remained unknown had she not left enough clues to firmly attach a name to her various identities.

In May 2013 a DeKalb County magistrate issued a temporary protective order against Mommyblogger under Georgia’s stalking statute. Part of the evidence we submitted to secure the order was an article I wrote for a regional blog detailing how we identified Mommyblogger along with computer forensic data linking her to multiple abusive accounts.

The day of the hearing to extend the restraining order, Mommyblogger arrived with counsel and several defense witnesses. Among them were two other people we had identified as cyberstalkers – one is a software engineer and the other is a practicing attorney, and Decatur’s deputy police chief. We negotiated a settlement with Mommyblogger’s attorney that we thought would end the harassment by Decatur residents. It didn’t.

Also in 2013, one of the builders most active at the time in tearing down houses seized upon an opportunity Mommyblogger’s cyberstalking cohort provided after I posted a teaser to a forthcoming article on the 1911 killing of a Decatur builder. The contemporary builder walked across the street from his Atlanta office into an Atlanta police precinct and told officers that I had “a beef with him” and that I had threatened to kill him. The Atlanta Police Department opened a criminal investigation into the complaint and we had to hire a criminal defense attorney to dispense with the spurious claim.

All told, between the defense attorney and various legal efforts to identify and stop the online harassment, my wife and I spent in excess of $10,000. Add to that the lost business in my consulting work – one client, a D.C.-area law firm, in 2013 was doing Google searches on my name in conjunction with the words “criminal investigation” – and the toll was enormous. And, on top of those amounts, if you add the cost of moving from Decatur to Atlanta after just 11 months and our eventual move from Atlanta back to the D.C. area in 2014 the costs incurred because I inadvertently crossed the line from dispassionate observer to activist are nearly incalculable.

The harassment leveled against us is an extreme example of the way people in gentrifying neighborhoods respond to change and challenges to it. Elsewhere these challenges take shape in calls to codes enforcement officers, service denial, vandalism, and physical violence. In Decatur, it manifested itself online and, ultimately, in court.

Was it worth it? According to current and former Decatur residents who have experienced the heavy hand of the city’s police department or who have been subjected to overt and more nuanced acts of privilege-based racism, it was. In phone calls and letters, they have told me that I was right. When my book documenting more than a century of displacement and erasure in Decatur is complete, I’ll leave it up to others to decide whether I was right or wrong.