When a City Turns White, What Happens to Its Black History? 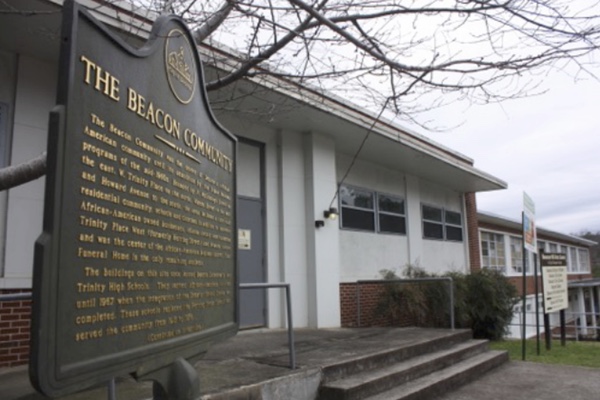 Historical marker outside Decatur's segregation-era African American schools in 2012, prior to their demolition.

Black history is an endangered resource in Decatur, Georgia. The Atlanta suburb was founded in 1823. It is a Southern city of 20,000 people and about 9,000 households. Demographic changes and gentrification since 1980 have transformed Decatur from a heterogeneous suburb to one that is increasingly whiter and wealthier.

These changes are reflected in Decatur’s approach to municipal history and historic preservation. This post explores how.

The City of Decatur in the 1980s took its first steps towards identifying historic places and creating a municipal historic preservation program. Its earliest surveys documented a significant and old African American community with homes, schools, and churches that met local and federal criteria for historic designation. In 1990 the Decatur City Commission passed a local historic preservation ordinance.

There are 23 properties – individual buildings and historic districts – inside the city limits listed in the National Register of Historic Places and another six that are designated historic under the city’s 1990 ordinance. None of Decatur’s officially recognized historic places is significant for its associations with the city’s African American residents.

I began researching gentrification in Decatur’s Oakhurst neighborhood in 2011. Oakhurst comprises the city’s southwest quadrant and between 1970 and 2010 it is where the majority of the city’s African Americans lived. 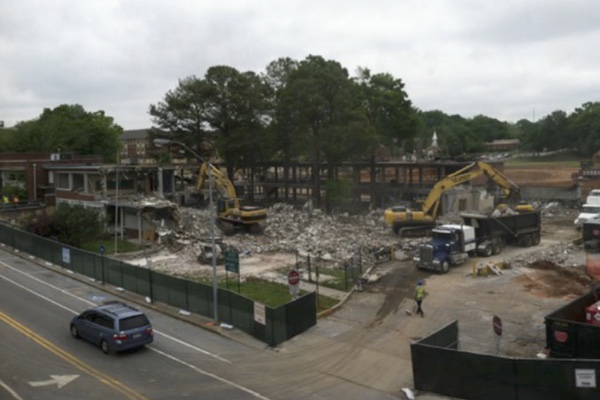 Decatur's historic African American schools being demolished in May 2013.

A historic preservation consultant in 1987 recommended that the neighborhood be evaluated for local and federal designation. One reason for its significance was its recent history. “To a large extent the increase in the black population in South Decatur neighborhoods was the result of blacks moving from neighborhoods which had been eliminated by urban renewal,” historian Darlene Roth wrote. “In most cases the relocation meant that black families were leaving slum housing conditions for single family houses. These were frequently the then thirty year old Craftsman bungalows in [the] Oakhurst historic district.”

Many of the African Americans who bought homes in Oakhurst between 1965 and 1970 had been displaced by urban renewal in Decatur’s downtown and in neighboring Atlanta. Oakhurst was an established residential neighborhood by the Civil Rights era and it once had been racially restricted, e.g., all white, by city laws and property covenants.

In the 1970s, Oakhurst became Decatur’s target neighborhood in an innovative affordable housing program known as urban homesteading. Decatur was one of 23 pilot cities selected by the U.S. Department of Housing and Urban Development to sell properties once in the agency’s inventory for one dollar to qualified homeowners. The new owners were pre-qualified for low-interest rehabilitation loans and they were required to live in the homes for three years. The idea was to bring capital and people back into distressed neighborhoods.

Urban homesteading was the first of three gentrification cycles that have swept through Oakhurst. The latest, which began around 2000, has resulted in the demolition of approximately 20% of Oakhurst’s building stock and the construction of larger, more expensive homes that are being bought by mostly young white families moving to the city for the schools.

Roth’s 1987 recommendation for creating an Oakhurst historic district was never realized. A grassroots effort in 2007 to create a historic district was defeated by what many residents say was a coordinated effort by builders and by homeowners concerned that their property rights and home values would be diminished.

Opposition to teardowns and mansionization were key factors driving the 2007 effort. “Today we are faced with a threat of demolition of the history of Oakhurst and a further burying of our historic resources,” wrote neighborhood preservation advocates in a short-lived blog. Creative Loafing, an Atlanta alternative weekly, reported in August 2007, “Proponents argue that creating the district will protect homeowner investments by ensuring that developers can’t tear down an older house to build a larger home.”

The Decatur City Commission tabled the 2007 historic district nomination. One outcome was the city’s decision to hire a consultant to conduct a citywide historic resources survey. The survey was completed in 2009. Excerpts were published in local blogs and the complete report was posted on the city’s website.

The 2009 survey brought Decatur’s historic context up to the 21st century and it included recent past properties — buildings less than 50 years old but which have transcendental significance — among the ones recommended for local designation and for listing in the National Register of Historic Places. Unlike the earlier studies done in the 1980s, though, the 2009 document failed to mention African Americans and their historic places. The words “black” and “African American” appeared nowhere in the latter document.

Since I began researching Decatur, the Decatur Housing Authority demolished 200 public housing units completed in 1941 and identified as historically significant by Roth. The City also demolished Decatur’s two segregation-era African American schools to redevelop the site as a new civic complex and police station. Prior to its demolition, a Georgia State University graduate had prepared a National Register of Historic Places nomination form for the two schools. She recommended listing in the property in the National Register of Historic Places for its associations with African American history and its mid-century modern architecture.

The demolition of black historic places extends into residential neighborhoods and the private sector. The homes that provided Decatur’s African Americans shelter and wealth after Jim Crow ended are sent to area landfills sometimes two or three at a time. 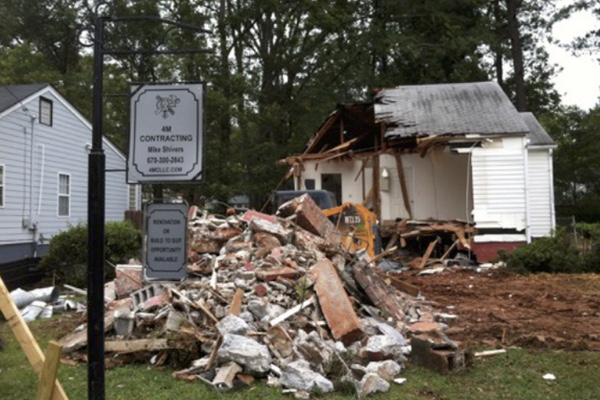 The woman’s sentiment is a common refrain heard in gentrifying neighborhoods worldwide. Longtime residents compete with newcomers for power in battles to define neighborhood identity and history. Over the past 30 years, Decatur has undergone dramatic changes to its people and its neighborhoods. Many of those changes were managed by policies implemented by the city’s elected and appointed officials.

Decatur’s policies since it first implemented a downtown development plan in 1982 have embraced gentrification and demographic inversion — replacing poor people with wealthier ones. In most gentrifying places, race and class are inextricably linked even though most people demur when observers suggest that race is a factor in the changes taking place.

In Decatur, the ties linking race and class are woven with history. The city’s historic preservation policies have changed with its people and its cultural landscapes. As Decatur has become whiter and wealthier, so too has its history.