The Shameful History of the Mistreatment of LGBT Teachers

Karen Graves is professor of education at Denison University and author of And They Were Wonderful Teachers: Florida’s Purge of Gay and Lesbian Teachers, University of Illinois Press, 2009. 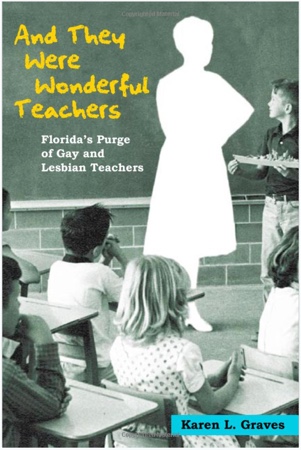 Even as legal prohibitions against same sex marriage have fallen throughout the country, discrimination against lesbian, gay, bisexual, transgender (LGBT) teachers persists. Justice Kennedy, who issued critical opinions in the landmark gay rights cases, Lawrence v. Texas and United States v. Windsor, has now delivered the crucial vote that makes marriage equality the law of the land. Yet alongside this remarkable civil rights advance, LGBT teachers in public and private schools are still harassed at work, denied promotions, or dismissed on the basis of sexual orientation or gender identity. The pattern of firing LGBT school workers may even be intensifying as part of a backlash to the quickly evolving gay rights movement. Currently, only 21 states and the District of Columbia have adopted laws against this sort of job discrimination. It is curious. Why does intolerance concerning sexuality remain in schools as it evaporates elsewhere in the culture?

Discrimination against lesbian and gay teachers is a relatively recent phenomenon, emerging in the mid-twentieth century. At the end of World War II, Cold War politics set the stage for the most repressive period in US history for gay and lesbian citizens. Organized resistance was beyond the reach of those caught up as pawns in the domestic containment strategy pursued by politicians. As a counterweight to foreign policy dedicated to containing the spread of Soviet communism abroad, schools and other social institutions promoted the image of a stable, consensus-driven society populated by conforming individuals. There was little acceptance for identities or perspectives beyond the norm. In education history this period was marked by a widespread purge of gay and lesbian teachers, professors, and students. The most relentless attack occurred in Florida during the Johns Committee investigations.

Between 1957 and 1963 the state legislative committee actively pursued gay and lesbian schoolteachers and professors, subjected them to interrogation without regard for due process, fired them from teaching positions, and revoked their professional credentials. Investigators threatened imprisonment to get people to talk. Given that the penalty for perjury, twenty years in the state penitentiary, was the same as that for “crimes against nature,” witnesses faced difficult choices. Some provided very little information. Others tried to defend themselves by emphasizing that they and their partners were respectable teachers; that they were being questioned regarding events that took place in the privacy of their own homes; that they were people of good character. Regardless of the strategies teachers pursued during the interrogations, the results were the same. By 1963 the Investigation Committee reported that it had revoked scores of teachers’ certificates with multiple cases pending and files on another hundred “suspects.”

A combination of factors led to the Committee’s demise in 1965, but, as long as laws criminalizing same sex behavior remained in effect, gay and lesbian teachers throughout the nation were summarily dismissed whenever their sexual identity became known. It made little difference whether or not they committed a criminal act, and exemplary teaching records were usually of no consequence. By the 1970s more teachers were challenging their dismissals in court. Decisions often turned on morality and privacy assumptions that had long circumscribed all teachers’ autonomy and employment rights.

By the end of the decade the gay rights movement was gaining ground in terms of local initiatives to prohibit employment discrimination on the basis of sexual identity. In 1977 anti-gay activists in South Florida pushed teachers to the center of debate on gay civil rights, claiming that “militant homosexuals” posed a threat to children’s well being. A history professor at Florida International University observed at the time, “This singling out of teachers for special discrimination is a perpetuation of the second class status which teachers have always been given in America.” The tactic was effective. The referendum to recall a newly adopted Miami-Dade non-discrimination ordinance passed by a 69-to-31 percent margin. The next year voters in California held off a more direct threat to gay and lesbian teachers. State Senator John Briggs’s initiative would have prohibited gay men, lesbians, and any other educator who spoke in favor of gay rights from working in public schools. The Oklahoma Legislature passed a similar bill, however. Board of Education of Oklahoma City v. National Gay Task Force became the first Supreme Court case to address gay and lesbian teachers. An evenly divided court preserved the Appellate Court decision. The part of the law restricting free speech was struck down, but gay and lesbian teachers could still be fired in Oklahoma.

Because certain aspects of the teaching profession distinguish it from other types of public employment such as government work and military service, teachers have been especially vulnerable to homophobic persecution. For instance, the expectation that educators act as exemplars for students led to intense public scrutiny of teachers’ personal lives and restricted professional autonomy. The fact that schoolteachers work with children opened the door to homophobic fears—unsubstantiated but persistent—that gay and lesbian teachers would “recruit” students; this fear reinforced demands that teachers act in accordance with a narrow standard of normative behavior. Analyses of the feminization of teaching provide additional explanations for the relatively low status of the profession, low levels of autonomy for its practitioners, and the great latitude the public has taken regarding supervision of teachers’ lives in and outside the classroom. Public perceptions of schoolteachers as guardians of the dominant ideology along with restrictive professional structures such as contracts that forbade specific personal behavior engendered conservative thought and demeanor. Since teachers who challenged the standards of normative behavior imposed upon them often lost their jobs as a result, the workforce was depleted of its most radical members. Until the 1970s, teacher organizations did not support colleagues who transgressed social norms and, thus, teachers were easy targets for state suppression of gay and lesbian people.

In 1985 Justice William Brennan wrote a dissent that remains one of the most critical gay rights statements yet issued by a Supreme Court justice. In Rowland v. Mad River Local School District Brennan urged the court to hear the case of a high school guidance counselor who had been dismissed on the basis of her bisexual status. Joined only by Justice Thurgood Marshall, Brennan framed the case as a question of the constitutional rights of public employees to maintain and express their private sexual preferences. He argued that both First and Fourteenth Amendment protections were in play, and suggested that discrimination against LGBT people might well meet the standards for establishing a “suspect class” or be found to impinge upon fundamental rights. Considering the intense hostility directed against them, Justice Brennan found “that discrimination against homosexuals is ‘likely …to reflect deep-seated prejudice rather than…rationality.’ ” That was thirty years ago. Although Brennan’s dissent has since made its way into the legal discussion on the Windsor case, twenty-nine states and the federal government have yet to address the kind of job discrimination that Brennan knew was unconstitutional. Schoolteachers remain particularly vulnerable. As courts confer the right to marry on LGBT citizens, their employment status is left, in too many districts, on the altar of public opinion.