President Obama Said “We Must Not Feign Concern and Then Go About Business as Usual.” Here’s How He Could Address the Baltimore Riot’s Root Causes.

Michael McQuillan, a founding member of the Hope in the Cities national network, coordinated the Crown Heights Coalition after the 1991 racial disturbance, teaches history at the Brooklyn School for Global Studies, and serves on the New York City Police Department’s Training Advisory Committee. 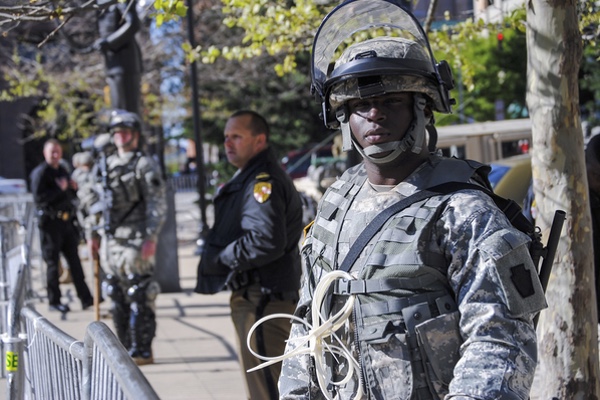 The Baltimore riots are heart-rending and wrong. But it is also wrong to misconstrue First Amendment protest rights as mere venting. Its purpose, as the Bill of Rights makes clear, is to “petition the government for a redress of grievance.” The chronic inability or lack of will among public officials, both elected and appointed, to stem the ever-faster sequence of police abuse against unarmed black men makes many treat violence as their only recourse.

Vietnam-era activist David Dellinger wrote: “There is a heady sense of manhood that comes from advancing from apathy to commitment, from timidity to courage, from passivity to aggressiveness. There is an intoxication that comes from standing up to the police at last” (though this was suicidal during Newark’s 1967 race riot and devastating after the Grand Jury verdict in Ferguson and Freddie Gray’s death in Baltimore). Violence is rightly condemned wherever it occurs.

Dr. King in 1966 called “police behavior in minority communities” the nation’s main racial problem. Yet government’s federal, state and local response is to urge “calm restraint” when protests occur without addressing protest’s root causes: the post 9/11 militarization of urban police forces, the culture clash between rigid, protocol-driven police hierarchies and communities of color seeking compassion, affirmation, and honest conversation toward positive change; and the denial of historical wrongdoing by police forces that have become less the “guardians of democracy” than enforcers of racial double-standards.

Blighted buildings along Baltimore’s West North Avenue illustrate how economic deprivation plants seeds of destruction. The decades-long deportation to China, Bangladesh and India of manufacturing jobs that were avenues of upward mobility for past generations, Reagan-Bush policies that enriched a complacent upper class, President Clinton’s rightward shift against the short-lived “Gingrich Revolt,” and President Obama’s fears that assertive action now will “reward the rioters” keep us in crisis.

“With the riots, we’re not trying to act like animals or thugs,” said Robert Wilson, a Baltimore high school graduate whom the New York Times quoted. “We’re just angry at the surroundings, like this is all that’s given to us, and we’re tired of this, like nobody wants to wake up and see broken-down buildings. They take away the community centers, they take away our fathers, and now we have traffic lights that don’t work. We have houses that are crumbling, falling down.”

President Obama said conditions in Baltimore remind him of what he long ago saw as a community organizer in Chicago. What change not driven by gentrification’s displacement of working people would he see if he once more walked those streets? While he rightly said, “We can make real progress but we’re going to have to do it together, and I can’t do it alone,” shouldn’t he set an example?

He should visit Baltimore – to see for himself, hear the people, sense despair, instill hope, grasp urgency, express solidarity. His reluctance recalls how “W” stayed aloof and aloft in the air over post-Katrina New Orleans en route from his Texas vacation to Washington.

Prominent people, insulated by security and bureaucracy, divorce themselves from the emotional impacts of actions and inaction. They lose the best parts of their character as they rise higher in stature. A YouTube video showed me three local leaders laughing as they launched a “town hall meeting on police-community relations.” One continually winked at allies and friends in the crowd with whom he made eye contact as if it was just another gig. How can you laugh as you place on the table a set of life-and-death issues? The President must trust his heart, transcend his intellect and head for the “Charm City’s” streets. He asserted in his first Presidential campaign that “we are the ones we’ve been waiting for.” Now we are waiting on him.

Mr. Obama should review his post-November 2008 Transition Team’s study of President Johnson’s “Great Society” program and FDR’s “New Deal” to explore potential legislative measures and Executive Orders for renewing inner city life in Baltimore and other target cities before the next crisis. He should plant his flag, challenge us to support him and spurn Republican obstruction.

He should summon Bill Moyers and other Johnson staff alumni as a sounding board for his initiatives. He could invite Peter Edelman, now a Georgetown University Law Professor but in 1967 an architect of the late Senator Robert Kennedy’s restoration initiative in Brooklyn’s Bedford-Stuyvesant section to illustrate what might now be done if the President can mobilize public and private resources.

He should call on Within Our Lifetime, a national network of race relations organizations including the Richmond-based Hope in the Cities, Everyday Democracyin Hartford, and the William Winter Center for Racial Reconciliationat the University of Mississippi, to professionally facilitate the intergroup discussions vital for bringing insights and policy or program proposals out of the ashes in Baltimore – to heal that city and create urban models. President Clinton’s “One America Race Initiative” named these as among the nation’s most effective change agents and they are available but as yet untapped at such times. The City of Richmond’s unique “Community Wealth-Building” project came directly from Hope in the Cities’success there.

What Mr. Obama called “our slow-moving crisis” will grow faster and not go away.

“The ultimate measure of a man is not where he stands in times of comfort and convenience but what he does at moments of controversy and challenge,” in Dr. King’s words. Can the President meet that standard? That’s what leaders do.