Aaron Leonard is a writer and historian. His book, “Heavy Radicals: The FBI’s Secret War on America’s Maoists,” was published by Zero Books in February 2015. He lives in Brooklyn, New York. His last piece on HNN was “The Missing Chapter in the History of America’s Sixties Radicals.” 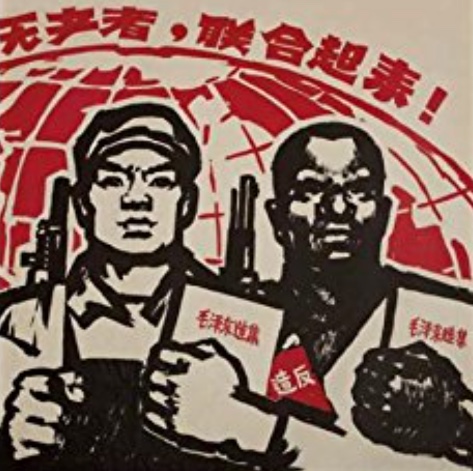 In the late 1950s and early 1960s certain Black intellectuals, activists, journalists, and others became fascinated with the Peoples Republic of China. In his new book, The East is Black: Cold War China in the Black Radical Imagination, Robeson Taj Frazier profiles a number of these individuals, offering another dimension to the Black radicalism emanating from the United States and its intersection with Maoist China. Frazier is an Assistant Professor at the Annenberg School for Communication and Journalism at the University of Southern California. 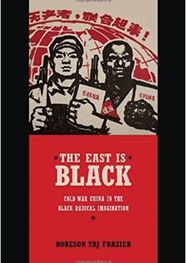 Your book walks a fine line of attempting to understand Maoist China on its own terms while also invoking the knowledge of what we have since learned about those years. How do you think your approach differs from a good deal of the historiography that casts Mao as, if not a ‘monster,’ at least a person whose time in power was unilaterally awful?

One thing that I think that must be interrogated and clarified within mainstream American viewpoints of past, today, and future is the image of Mao as a political leader and thinker. Let's be clear, Mao made terrible decisions and helped set the course for policies and political movements that produced extreme social chaos, political repression, imprisonment, violence, starvation and death among China's masses, as well as in Tibet and other places. His government and political party were totalitarian, most definitely.

But it also must be noted that Mao and the CCP radically transformed China; prior to their rule the country was the domain of foreign governments and private interests, a product of the West’s efforts control China’s ports and resources and decimate its population with opium addiction (the original “drug wars”).

When Mao and the CCP took over, they labored to politicize peasants and rural workers as the agents capable of transforming China and eliminating poverty, class exploitation and inequality. It was these features of the China’s leadership that populations outside of China found empowering and noteworthy. Nonetheless, it is these same aspects of the Mao and the CCP’s rule and ideology that are often not included in common American narratives about China. And this is disappointing. Moreover, it is surprising to me that while Mao is still depicted as a political monster par excellence, little is said in American popular discourse about the historical and continued impact of Leopold’s atrocities against the Congolese, the ongoing displacement and violence enacted on Palestinians, the fact that the only time nuclear weaponry has actually been used on people it was of the United States’ doing.

I am not defending Mao; the terroristic acts and scars of his regime have been recorded, both in historical accounts and on the minds and bodies of Chinese people. But I am echoing other historians and critics’ call for an end to the historical amnesia, insularity, and myopia that pervades many uncritical perceptions of China’s past and present.

Ultimately, my objective in the book is to neither portray Mao as a monster nor exalt him as some third world hero and political deity. My purpose is to explore the uniqueness of he and the Chinese Communist Party’s ideas and efforts to reach out to the international world, particularly populations of African descent, and moreover to communicate the complex political and ideological struggles that surrounded the making of he and the CCP’s aura as international political forces of interest to black Americans and other populations fighting against anti-black racism, capitalism and imperialism.

Your book opens describing the 1959 visit to China on the part of W.E.B. and Shirley Graham Du Bois. Why did they visit China when they did and what, if any, do you see as the contemporary relevance in revisiting this historic visit?

The Du Boises’ 1959 visit to China was the product of several things. The couple had wished to travel to China since the Chinese Communist Party (CCP) established a communist government in 1949. But their ability to travel there was prevented; first by the U.S. State Department’s outlawing American travel there, and second by the State Department’s seizure of W.E.B. Du Bois’s passport in 1951. Seven years later the U.S. Supreme Court passed a ruling that overturned the State Department’s decision. The Du Boises consequently took immediate advantage of this decision, embarking on a one-year journey that took them to various parts of the world. China was one of the places they journeyed to; W.E.B. Du Bois described their stay there as “the most fascinating eight weeks of travel and sight-seeing, [he had] ever experienced.”

I have a number of arguments regarding the historical and contemporary relevance of their travel there, but here are my thoughts in brief. Their experiences and encounters in China offer an instructive template for students and enthusiasts of history and international relations to consider the different means and very particular geopolitical and racial discourses through which the Chinese government worked to showcase and exalt China’s road to socialism to foreign visitors, particularly to Western racial minorities and nonwhite activists, and Third World liberation groups. But even more, the example of the Du Boises has contemporary relevance considering the unique ways the lives, activities, and representations of various African American, Afro-European, and African professional athletes, artists, and import-export workers who now call China home are currently being mobilized – primarily within the realm of public discourse – by the Chinese state, private interests, and everyday Chinese people to make claims about Chinese life, sociocultural change there, and China’s place in the world.

In writing about Robert and Mabel Williams’s experience in the US, Cuba, and China, what comes through is a dense thicket of global politics, a non-ML King paradigm of fighting for Black freedom, and how oppression based on skin-color assumed different forms in different places. What did the Williams’s confront being a Black man and woman, first in Monroe, NC, then Cuba, then China?

As you allege in your question, being Black and being African American in these three different locations meant entirely different things. In Monroe, the Williams grew up surrounded by racial terror and violence and vast economic inequality – the town’s police chief and other local officials could be found participating in white supremacist rallies and condoning both police and white vigilante coercion and assault on Black residents. Whereas in Havana and Beijing, the Williams were treated like cultural ambassadors – political refugees that were afforded a level of privilege and comfort that the couple and their children had never experienced before. In both places, their nationality and history of being avid critics of U.S. racial discrimination and U.S. empire enabled them access to advantages not experienced by most other Black people in these places. Furthermore although at times the Williams thought differently, escaping racial oppression in the U.S. did not mean that they could avoid anti-black racism in Cuba and China. As the couple learned, many Chinese citizens and Cubans held extremely negative viewpoints about populations of African descent and that these attitudes took grander shape in structural policies and treatment of particular Black populations in these places, most centrally Afro-Cubans in Cuba, and African students studying in China.

You describe how the journalist William Worthy went to China and interviewed a former US soldier, Clarence Adams, at a time when the US State Department was doing everything in its power to limit American citizen’s contact in China. Who was William Worthy and how did Clarence Adams end up living in China?

William Worthy was a foreign news correspondent and the first American journalist to report and broadcast from China since the establishment of the People’s Republic of China in 1949. Worthy spent the 1950s traveling throughout Asia (South Korea, Myanmar (Burma), India, Vietnam, and China) and discerned that dominant American news media and Black ethnic news media were not supplying Americans, most especially Black Americans, with a multifaceted, nuanced and critical perspective of the world and American foreign policy. In blatant violation of the U.S. State Department’s ban on travel to China, Worthy traveled and reported from China in 1957; his reports garnered the attention and excitement of the U.S. news media and public, as well as the ire of the U.S. government who immediately prevented him access to a passport. Worthy would spend the following decade fighting for his and other American leftist thinkers’ and radicals’ right to travel unimpeded by the America’s interests abroad.

Clarence Adams, on the other hand, was an American soldier and Korean War prisoner of war who at war’s end opted not to return to the United States but rather accept Chinese sponsorship to study for his undergraduate degree and create a life in China. Raised in extremely low-income and racially oppressive and divided conditions of 1930s and 1940s-era Memphis, Adams ruled that the chance to be educated and make a life elsewhere trumped returning to Jim Crow America.

One of the people you profile is Victoria “Vicki” Garvin. I was struck by how her residency in China appears to have been a direct result of the Sino-Soviet schism of the late fifties early sixties. How did that event lead to Garvin coming to China and what did she experience while she was there?

Garvin lived in China, primarily in Shanghai, from 1964-1970. She spent the majority of her time there as an English-language instructor to hotel workers and undergraduate and graduate students; a number of her students went on to use the skills learned in her classroom as foreign relations specialists in government, as well as English-language teachers, translators, radio announcers, and government interpreters. Garvin’s appointment in the school where she served came as a result of the suspension of Sino-Soviet relations and the Soviets’ subsequent recall of all their educators in China in 1960. The quick departure of Soviet staff from Chinese schools and other sectors of Chinese life and industry forced China to redirect its educational resources and focus. Garvin’s invitation to teach was thus a product of this geopolitical climate and China’s shift away from emulating the Soviet model of education to that of adopting a more international orientation.

During her six years living in China, she experienced a great deal – she learned a lot about Chinese culture and the ideological struggles vibrating within Chinese politics and everyday life; she developed extremely meaningful relationships with her students and with Chinese workers and peasants and felt that she was becoming a part of a changing society and political culture, one from which black Americans could learn important lessons; she observed and participated in the institutionalization of a dogmatic culture around Mao and his ideas and the later struggles and chaos of the Chinese Cultural Revolution, events that shook up Chinese life and to which she later became extremely critical; and most important, at least in my view, she fell in love, her interracial marriage with another American foreign resident [the U.S. Maoist, Leibel Bergman A.L.] a feat largely impossible in many U.S. states at that time.

You had a personal experience in China that is unique. How did you become interested in China and this particular focus in African-American history?

My interest in China begins with my mother. She enrolled me in a Mandarin-language class as a teenager and thus ensued my relationship with 20th and 21st century Chinese history and political culture. It was from learning Chinese that I opted to later travel and live in China for a short period of time, and continue traveling to China over the last twenty years. My book, and in many ways my career as a scholar, writer, and producer, are therefore a product of my mother’s foresight and imagination, and even more due to the great parenting, mentoring and guidance by my parents.