The Missing Chapter in the History of America’s Sixties Radicals

Aaron Leonard is a writer and historian. He publishes regularly in Truthout.org, Rabble.ca, History News Network, and Physics World. He lives in Brooklyn, New York. He is the co-author of “Heavy Radicals - The FBI's Secret War on America's Maoists: The Revolutionary Union / Revolutionary Communist Party 1968-1980” (Zero Books paperback, 2015).

The RCP, RSB, and its front groups, identified as the VVAW, UWOC, and USCPFA, represent a threat to the internal security of the United States of the first magnitude.

The story of sixties radicalism in the US is one largely revolving around a discrete set of actors: The Black Panther Party, Students for a Democratic Society, the Yippies, and the Weathermen. That there emerged from the sixties a significant trend, called the New Communist Movement, which at turns embraced conventional Marxism-Leninism, Cuban socialism, and Maoist communism, is a topic relegated to the margins. It is the stuff of debate of fragmented left sects, obscure academic papers, and footnotes along the way of telling other stories. 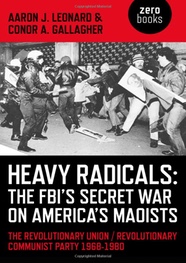 Such is the case in the popular realm. In contrast, the US government, specifically the Department of Justice and its Federal Bureau of Investigation, relevant US Congressional committees, and ultimately the executive branch, were never so dismissive. For them, this New Communist Movement, especially its Maoist component, were viewed as a pronounced threat. In turn it was the focus of ongoing, intensive, and relentless attention.

This was most true in the case of the Revolutionary Union (RU), which would become the Revolutionary Communist Party (RCP), the largest Maoist organization to arise in the United States out of the fractious decade of the sixties. As the Bureau, with all due alarm, noted, “the magnitude of the threat by RCP and its front groups to accomplish its aims or [sic] organizing and overthrowing the United States Government by force and violence warrants constant vigil...[sic]” While there was an element of hyperbole in such statements—in no small measure to legally justify the extraordinary attention they were giving this group—it was hyperbole nonetheless stemming from real concern.

Those who would become members of the RU/RCP emerged out of the opposition to the House Un-American Activities Committee early in the sixties decade, the Free Speech Movement and larger campus upsurges of that time, and they were also greatly impacted by China’s Great Proletarian Cultural Revolution. Its members were a mix of exiles from the old Communist Party USA, China-philes, and a significant number of student radicals—many with their roots in the pre-eminent student organization of the day, Students for a Democratic Society. The RU, of all the groups and grouplets, that took hold in the wake of the shattered SDS, would become the largest in the New Communist Movement. At its peak it had over a thousand dedicated cadre and branches in every major city of the US, a multitude of supporters, and influence over thousands more, through such groups as the US-China Peoples Friendship Association and Vietnam Veterans Against the War.

The group’s roots were in the San Francisco Bay Area. Its organizational architect, Leibel Bergman, was the son of a long line of rabbinical scholars, who in his youth became a member of the CPUSA. He, along with anti-war activist and Free Speech Movement veteran Steve Hamilton, Black Panther supporter and Free Speech Movement veteran, Bob Avakian, radicalized Stanford University professor and Melville scholar, H. Bruce Franklin, along with a dozen or so others—including an early FBI informant in place by the group’s third meeting in April 1968—formed the Revolutionary Union.

The RU emerged as a counter point and renunciation of another formation made of CPUSA refugees, the Progressive Labor Party (PLP), which also had assumed the mantle of Maoism. The contention between the two groups was sharply expressed in the waning days of the Students for a Democratic Society, with RU challenging PLP’s interpretation of Maoism, and the FBI working in the shadows to leverage the conflict toward rending the larger SDS.

In researching the RU, one finds hiding in plain sight a previously released FBI document outlining the Bureau’s inclination--via instructions to its informants--to support the National Office of SDS, i.e. those who would become the Weathermen, against the Progressive Labor Party faction. This was done in order to thwart PLP’s growing influence over that group. The Bureau’s cynical calculation is outlined thusly:

The convention did result in a split of the SDS with the result that PLP was required to form its own “rump” organization; the SDS as the mainstay of the New Left Movement is now seriously divided and, to this extent weakened; and the National Office fraction is gradually being forced into a position of militant extremism which hopefully will isolate it from other elements of the libertarian [sic] community and eventuate its complete discrediting in the eyes of the American public.(4)

One cannot look at the history of the Weathermen group, and the associated narrative of sixties radicalism gone bad, quite the same after reading such things.

Looking at the RU/RCP in fact leads to quite a number of startling revelations. For instance one learns of the existence of a “Maoist” current within the pro-Soviet Communist Party, USA, known as the “Ad Hoc Committee” (AHC). The AHC emerged as a newsletter circulated within the Party in the early and mid-sixties. The AHC, as it turns out, was the progeny of FBI Special Agent Herbert K. Stallings, who according to an FBI personnel report, “created from his own imagination” a fictional pro-Chinese entity within the old Communist Party USA,”

designed to disrupt and fragmentize the communist movement in the Chicago area, and nationally if possible. It has taken a pro-Chinese, Marxist-Leninist line, and the general over-all purpose of the bulletin is to create in the eyes of the CP the existence of a factional grouping within the Illinois District and nationally if possible which adheres to the Chinese interpretation of Marxism-Leninism, as against the pro-Soviet line of the CPUSA and the Illinois District.(5)

The AHC—whose 17,000 page FBI file is being withheld to protect “confidential law enforcement sources” and “techniques”— would later mysteriously appear at a critical moment in the RU’s history.

By the early seventies while such groups as the Black Panthers and Weathermen were largely in disarray, retreat, or disintegration, the Revolutionary Union, in contrast, was ascendant. This to the point that in September 1975, Los Angeles Times reporter Ellen Hume, ran a profile on radicalism in the seventies singled out the RU. The article’s title was, “The ‘heavy’ radicals—The intellectual cadre plant ideas not bombs; terrorists considered least important to cause.”

Amid the shifting terrain of the crisis-wracked seventies these newly minted Maoists sent cadre to factories to immerse themselves in major US industry. In a few short years they had an established presence in the steel plants across the US, the mines of West Virginia, auto plants in Detroit, meatpacking centers of Tacoma, Chicago, Milwaukee, and dozens of other greater and lesser industries. They were at the heart of militant labor struggles, particularly in the wildcat strike movement in the West Virginia coalfields. Along with this they inspired and lead dozens of chapters of the university based Attica Brigade/Revolutionary Student Brigade. They politically lead—controversially—Vietnam Veterans Against the War, and were a critical force behind the highly influential, US-China Peoples Friendship Association.

As the seventies decade hit its stride and they became a fully articulated national organization they continued to be a priority focus of the Bureau. Infiltrators were sent in on every level, with Hoover’s successor L. Patrick Gray, noting, “There has been good informant penetration of the RU, but coverage is not by any means sufficient in either quality or quantity.” Along with the informants, the Bureau worked to set the RU against other New Communist organizations, it set up phony communist collectives for infiltration and disruption, planted phone taps and microphones in apartments, conducted break-ins to steal membership lists, the used the FBI ‘friendly journalists’ such as New York-based syndicated columnist Victor Riesel and San Francisco’s Ed Montgomery to undermine the group.

As things developed, the RU/RCP’s rising fortunes would be short-lived. The death of Mao Zedong in 1976, and the subsequent abandonment of Maoist-socialism for its entry into the world capitalist market, sparked an existential crisis for the group, precipitating a major schism. In turn it broke into two pieces, one going on for a time but later reconstituting within other groupings or seeing members drift away from radical politics. The other fragment continued on, retaining the name RCP, but diminished by a third with more leaving in the ensuing years. While the group still exists today, it is a considerably smaller, quite different, entity.

The story of the Revolutionary Union/Revolutionary Communist Party constitutes a critical piece of US history. It is a story in opposition to the standing mythology that all who became radicalized in that time quickly returned to the mainstream or spent the ensuing years dealing with the consequences of having attempted direct “blows against the empire.” More than that, it is a missing link in the overall radicalism of that time. It adds critical insight into the story of the destruction of SDS, the activity of the Peace and Freedom Party and its alliance with the Black Panther Party, the road traveled by the pre-eminent veterans group of its day, Vietnam Veterans Against the War, and a good deal else. It is also the story of one of the largest projects undertaken by J. Edgar Hoover and what would become the post-Hoover FBI. By recognizing the specific role of the RU/RCP and the FBI’s unrelenting efforts against it, a much fuller and startling picture of the era comes into focus.