Two Things You Don’t Know About Roe v. Wade that Will Surprise You

James Robenalt is a trial lawyer and author of "The Harding Affair, Love and Espionage During the Great War" (Palgrave/Macmillan, 2009). Robenalt lectures nationally with John W. Dean, former White House Counsel, on Watergate and legal ethics. His latest book is "January 1973: Watergate, Roe v. Wade, Vietnam, and the Month That Changed America Forever." 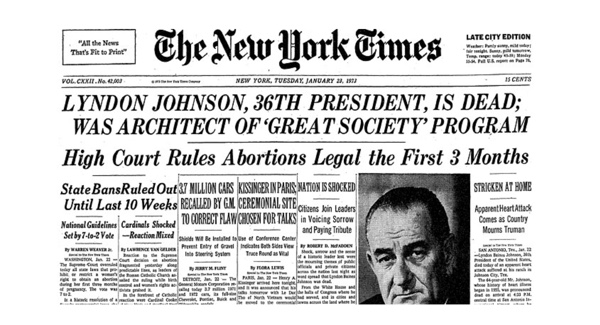 January 22, 1973 is the date that most associate with Roe v. Wade. That is the day when Justice Harry Blackmun read a summary of the Supreme Court’s decision in Roe and that of its companion case, Doe v. Bolton. Every year there are demonstrations in Washington on January 22 to commemorate or protest the Supreme Court’s decision recognizing a woman’s right to an abortion.

But there is another date that actually might be far more significant in the history of these decisions: May 25, 1972. That is when these cases should have been decided, and likely were decided, but in a much different form. And if they had come down in May or June 1972, the arc of American politics would have been remarkably different. I argue as much in my new book, January 1973, Watergate, Roe v. Wade, Vietnam, and the Month that Changed America Forever (release date May 1, 2015).

First, let me identify my source. Larry Hammond was Justice Lewis F. Powell’s law clerk at the time Roe and Doe were decided. Hammond, now in his seventies, agreed to talk with me about how the decisions came about and I believe I am the first to interview him with the full benefit of the Powell Papers that were released after Powell’s death in 1998.

Here are the two revelations from these interviews and the Powell Papers that will surprise most people: (1) the justices of the Supreme Court had reached a majority on versions of the opinions that Blackmun first drafted in May 1972—and these drafts would have left it to the states to draw the line as to when life begins; and (2) Justice Powell, not Justice Blackmun, pushed for the “viability” standard that remains the hallmark of Roe forty years later. While Blackmun may have been the author, Powell really was the moving force behind the core principle of Roe.

When Roe and its companion case out of Georgia were first argued in the Supreme Court in December 1971, the Court was down two justices. Justices Black and Harlan had both retired (and died) in the fall of 1971 and President Nixon had nominated Lewis Powell and William Rehnquist to take their places. Neither man had been confirmed by the Senate at the time of the first oral arguments in Roe and Doe, so by Court tradition neither could take part in “the Conference” to decide the cases, nor could they vote on the outcomes.

There did not appear to be a consensus at the time of the first Conference on how to decide the abortion cases, so Chief Justice Warren Burger took it upon himself to assign Justice Harry Blackmun, his friend from childhood, to take a stab at first drafts. If Blackmun’s drafts would “command a majority” then those would become the Court’s decisions. Justice William O. Douglas disputed Burger’s assignment to Blackmun and thought he had the right to make the assignment as the most senior judge who, he believed, was in the majority out of the first conference. Douglas, however, let it go after an exchange of some fairly heated notes with the Chief.

Blackmun took his time in drafting. As former counsel to the Mayo Clinic in Minnesota, his perspective was that of the doctor whose patient seeks an abortion. He wanted to study up on the history of abortion, with a kind of obsessive focus on the Hippocratic Oath (which actually has a proscription against abortions).

Blackmun’s first drafts of Roe and Doe came out in May 1972.

With Roe, Blackmun wanted to overturn the Texas statute as void for vagueness, meaning it was too imprecise to be enforceable. The result would be to turn it back to Texas to redraft a clear statute. On Doe, the more reform Georgia statute from 1968, Blackmun addressed squarely a woman’s right to an abortion. He found there was such a right, but critically, he observed that the Court, at that moment in time, did not have the experience or knowledge to decide “when life begins.”

Thus, given these outcomes, the Supreme Court would have recognized a right to an abortion, but left it to state legislatures to do the line-drawing on when an abortion could be prohibited.

Justice Douglas, for one, believed that a majority of the seven justices who could decide the cases was in place in May 1972. Specifically, on May 25, 1972, Douglas, Brennan, Marshall and Blackmun (4 of 7) all agreed on Blackmun’s drafts. Justice Stewart added his vote in favor by May 29, 1972. (From my perspective, it is fascinating that this all took place just as burglars were first breaking into the Watergate in their political espionage campaign against the Democrats.)

Enter Chief Justice Burger. He was not pleased with the first drafts and pressed Blackmun to “re-argue” the cases, allowing two conservatives, Powell and Rehnquist, to take part. Douglas and the others in the majority exploded—they believed the decisions should have come down and that Burger was playing politics with a partisan issue likely to have some role in the 1972 presidential contest. Douglas’s dissent to re-argument was vitriolic—and never saw the light of day. With Powell and Rehnquist participating, the vote to re-argue carried.

This is when Justice Powell asked his law clerk, Larry Hammond, to take a look at the briefs in Roe and Doe and Justice Blackmun’s first drafts. Hammond did so over the summer of 1972 (as Richard Nixon became mired in the Watergate cover-up). Hammond wrote a 30-page memo for Powell, arguing in favor of the right to an abortion. Powell, when he returned from the summer break, told Hammond that he agreed with him. This was a real surprise. Chief Justice Burger’s push to re-argue was about to backfire.

As the second oral argument drew near in October 1972, Hammond wrote a game-changing bench memo to Powell, pointing out a recent federal court case out of a lower court in Connecticut that had address that state’s abortion statute. In what lawyer’s call dicta (meaning not critical to the opinion), the Connecticut judges argued that the critical line in any pregnancy was “viability,” that is, when the fetus could live outside the womb—roughly the end of the sixth month.

No one argued “viability” in the briefs or in oral argument. Yet it was Powell who gently suggested to Blackmun that the Court consider and accept “viability” as its important dividing line. The Court adopted a three-part test, according to the trimesters of a nine-month pregnancy, but decided that the rights of a fetus were not to be considered until viability. While the other parts of Roe have dissolved, “viability” remains the law today.

I argue in my new book that this controversial change in how the case was decided had a dramatic impact on American politics. The Roe decision activated the so-called Religious Right. But more importantly, because abortion is an issue about which many will not compromise—it is a life and death decision to some—the whole concept of “no compromise” as a political strategy entered our political bloodstream. Along with the other great events of January 1973—Truman’s death, end of the Vietnam War for the US, Watergate burglars’ trial, Nixon’s Second Inaugural, Roe and the death of Lyndon Johnson (on the same day as Roe)—the conditions set up for a government of deadlock.

Checks and balances have become checks.

Obviously history is never quite this clean, but I think it is an important time to look back at this momentous month to start to understand how we got to where we are and perhaps learn how we might all start to get along again for the sake of our democracy and our country. Understanding Roe v. Wade and how it was actually decided is a first step.