Where Did Your New TV Come from? Well, It's Drenched in Congolese Blood. 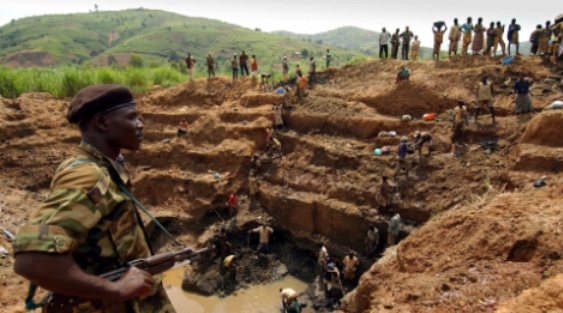 The Dallas-Fort Worth metroplex is home to an incredible array of peoples and communities from around the world, which makes us the lucky ones who get to teach and interact with so many first generation immigrant students. Often times these interactions spark new interests for us, such as our recent obsession with Congo. Sure, we were familiar with the turbulent past of the region, but it wasn’t until one of us had the privilege of teaching an extraordinary Congolese student that we became inspired to learn more about the troubled past of her home country. This led us to invite the Congolese historian Didier Gondola to our campus to speak. His lecture was so well received that we formed a reading group for King Leopold’s Ghost, created new assignments for our students to complete on Congo’s history, wrote a couple of small articles, and even discussed traveling to the Congo. Now, we have a new gripping Netflix documentary to reference in our quest for knowledge about Congo: Virunga. This Oscar-nominated documentary follows the efforts of national park rangers to protect one of the world’s last remaining lowland gorilla refuge sites. But, to understand the political and economic context of this powerful film, one needs to delve a bit deeper into the complex history of the Congo than the frustratingly simple, one-minute overview provided at the start of the documentary.

All of this brings us back to our wonderful students. One day, during a conversation about their childhood in Belgium, another Congolese student related that she noticed how pretty much everything the Belgians had could be traced back to the wealth they extracted from Congo. The more we researched, the more we found out how inextricably connected the two countries were, and that the root of the problems facing the Congo today stem from the malicious economic motivations that drove King Leopold’s colonial venture there in the late nineteenth century. First it was ivory, then rubber and palm oil. In a span of just a couple of decades, millions were mutilated, murdered, enslaved, and raped to satisfy the insatiable western appetite for resources that drove Europeans into the heart of Africa, and it was all done under the Belgian King’s guise of a humanitarian effort to rid central Africa of its internal slave trade.

After King Leopold’s personal colony was officially handed over to the government of Belgium, colonial oppression simply took on another form. Uranium, plutonium, copper, gold, diamonds, and cobalt were all in high demand at different points throughout the twentieth century, and deposits were extracted from Eastern Congo by forcing Congolese to work in the mines. Of course forced labor and resource exploitation was taking place all over Africa at the hands of the various European colonizers, but this particular region was, as Congolese people today are fond of saying, “cursed with too many resources.” Indeed, the Belgians found countless consumers from Western nations who were willing to pay for these valuable resources, despite the inhuman means of their extraction. One such example is when a Belgian company operating in Congo sold the United States 1200 tons of uranium so the U.S. could construct the atomic bombs that were dropped on Hiroshima and Nagasaki in 1945.1 The same type of plundering and profiteering that characterized Congo’s colonial period is still going on in Congo today.

In fact, ever since gaining independence in 1960, Congo has struggled to take ownership over its vast mineral and natural resources. During the Cold War (1945-1991), the U.S. was part of an effort to make sure that a dictator inimical to communism was empowered. That dictator, Mobutu Sese Seko, toed the line of anti-communism in order to receive critical military and diplomatic aid from the United States. In exchange, American companies had access to Congolese mineral and petroleum resources, and the U.S. government had assurance that Congo would not become communist. Once the Cold War ended, however, the United States slowly distanced itself from Mobutu, clearing the way for his ouster in 1996. One of the many reasons that the U.S. looked the other way in 1996 was because the regional coalition of countries that sought Mobutu’s removal included Tutsi-led Rwanda. Just two years before, the Tutsis of Rwanda were slaughtered by a Hutu-led regime inside Rwanda, which brought tremendous international sympathy for the new Tutsi regime. Many of the Hutus that perpetrated the genocide sought refuge in Eastern Congo, so there may have been an element of payback operating here. In the end, Mobutu was expulsed and replaced by a new leader who also had dictatorial tendencies. Under Laurent Kabila, a struggle for territory and power over Eastern Congo developed as he sought to exert his independence from his former patrons, Rwanda and Uganda. This geopolitical struggle quickly escalated because of a new mineral unearthed in the area: coltan.

The personal computer revolution of the late 1990s placed a significant strain on global supply chains to meet the demand for these products. Over time, coltan became an increasingly important commodity because electrical currents can run through it without heating up the metal. This meant that computer companies could reduce the size of their monitors, which no longer needed fans inside to cool them down. Before long, flat screens wired with coltan were revolutionizing the electronics industry. There was only one problem: 60% of the world’s supply of coltan is in Eastern Congo. The geopolitical struggle that flared up there in the late 1990s quickly metastasized into a global economic struggle that continues to this day. More regional countries sent troops into the area in an effort to destabilize it and deny the Congolese government the ability to control the coltan trade.

As this war raged on, Rwanda created a vast coltan export trade, despite having very few deposits of coltan in its own territory.2 This smuggled coltan (along with that produced by desperate artisanal Eastern Congolese miners) inevitably ends up being sold to subsidiaries of electronics manufacturers, resulting in many of our cell phones, televisions, monitors, and smart bombs being wired with Congolese coltan that is drenched in the blood and psychological trauma of the people living in the region. To make matters worse, the Congolese Army has proved to be corrupt and dangerous and many Congolese have joined militias fighting on all sides of this conflict, hoping to turn a profit from smuggling coltan out of the country. More recently, British-based multinational corporation Soco International has begun exploring for oil in the Eastern Congolese national park Virunga, where investigative journalists have definitively tied the company to funding rebel groups that are trying to destroy the wildlife of the area in order to obviate the need for a national park. The Virunga park rangers’ valiant fight to preserve this world heritage site is essentially what this new documentary film, Virunga, is all about.

In the midst of this war zone, cultural and social prohibitions against rape have eroded, and these crimes are being perpetrated at an astonishing rate. Rape is used to subordinate and humiliate women and men, and many soldiers infected with HIV have been sent out with the task of specifically spreading the disease in certain areas. The United Nations has sustained its largest peacekeeping mission ever in the area, but it has largely failed to bring stability or to sustain the world’s attention to the humanitarian plight there. Not only has the international community failed, but American media outlets, which notoriously struggle to cover complex stories that cannot be reduced into short tidbit segments for the public to easily digest, have largely shied away from covering this complicated and deadly conflict.

This new plundering of the Congo suggests that, in the same way that Europeans justified murder, rape, and exploitation in the early twentieth century by saying Westerners were bringing “civilization” to colonies all over the world, so too do we now use a multiplicity of justifications to continue pillaging Congo’s resources. Among the most common excuses are that such events are out of our control, that Africans themselves are to blame for this madness, or the brazen assertion that our corporations need unfettered access to Congo’s minerals in order to drive the digital revolution forward. In reality, though, it’s our companies’ insatiable greed, our consumption of electronics, and our unwillingness to expose these crimes against humanity that underpin what is really happening in Eastern Congo. If Congo was able to actually control its borders and industry, then the price of such minerals would rise – something most businesspeople and consumers do not want to think about.

There are solutions, though, and since the U.S. has been complicit in exploiting Congo, we have an ethical mandate to stop the plunder and restore peace to the region. Our government has been dodging this conflict, but the Obama administration needs to prioritize this situation. During his campaigns, Obama was fond of saying that one had to be able to juggle multiple situations/priorities when president. It is time to show that ability. Obama signed into law a provision to certify that coltan coming out of Congo was not “blood coltan,” but the law hit all producers of coltan in Eastern Congo – even artisanal miners (i.e. – subsistence miners) – the same. If we keep this provision in place, and we impoverish low-end subsistence miners, we must help provide food relief in this war-torn area.

More importantly, our government ought to be pressuring Congo’s neighbors to cease fueling the destabilization of Eastern Congo, and we must lend as much assistance as possible to the United Nations’ peacekeeping mission, as well as the Congolese state and people, in order to stabilize the political, legal, social, and military institutions there. With true peace, the people of Eastern Congo would be free to go back to making choices about whether to return to their villages or work in the mines. As of right now, because of the instability of the region, mining is their only option. Furthermore, only with a regional peace agreement is there any chance of political and social institutions functioning.

No, the U.S. cannot “save” Congo, but it can help create conditions that might empower Congolese to stabilize the region and their country. With stability and sovereignty, perhaps Congo will be able to harness its resources for the good of its people, the way Patrice Lummbumba envisioned before being assassinated.