John Prados is a senior fellow of the National Security Archive in Washington DC. His current book is "The Family Jewels: The CIA, Secrecy, and Presidential Power" (University of Texas Press). Read more at his website, johnprados.com. 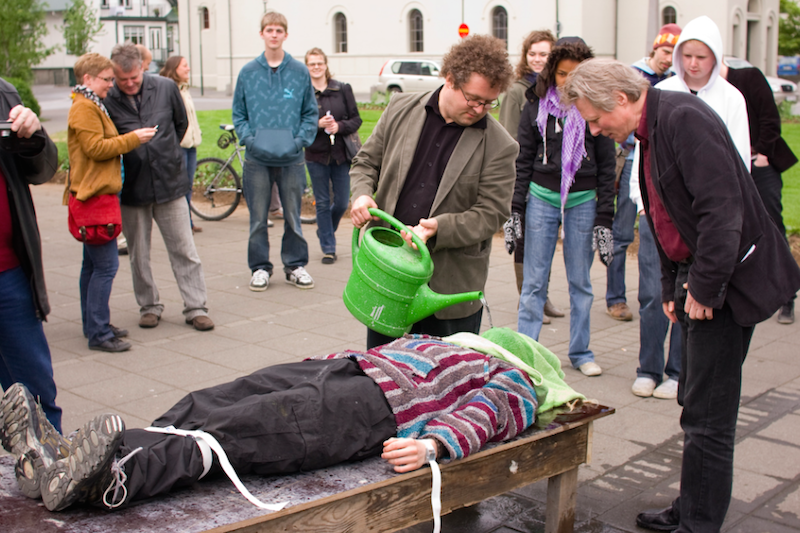 "Demonstration of waterboarding at a street protest during a visit by Condoleezza Rice to Iceland, May 2008" (Wikipedia)

President Barack Obama must rue the day when he renounced initiating an inquiry on CIA behavior during the war on terror in favor of moving forward into the future. Had there been a truth commission back in 2009, today all this would be in the past. Instead the scandals of the torture and the black prisons have come back to bite–hard. And as for the future to which Mr. Obama aspired, that now appears dark indeed. The Central Intelligence Agency is so far from telling truth to power that one begins to wonder if it can be saved.

First, far from marching into the future the CIA has become so mired in the past that it cannot keep its hands out of the till. A presumptive obstruction of justice, perpetrated at the agency in 2005, has been covered up. Agency stalwarts employed every legal maneuver imaginable in their efforts to avoid any serious investigation of these events. When Mr. Obama rejected any deeper inquiry and Attorney General Eric Holder dropped the last remaining criminal investigations, it seemed the spooks were almost out of the woods.

When the Senate Select Committee on Intelligence (SSCI) launched its investigation, as a substitute for the truth commission, Langley considered that a threat because it could rekindle the fire. No doubt the spooks did whatever they could to encourage Republicans on the SSCI to withdraw from the investigation. Reducing the stature of the SSCI’s eventual report to something like sour grapes from a disgruntled political party was the next best thing to getting the investigation cancelled.

It did not work. The gravity of the criminal offenses of torture and illegal imprisonment leveled at the torture program demanded serious attention. Everything revealed about the Senate report so far indicates that the SSCI found, to its horror, that the charges were true.

The CIA fallback was to have its own people spy on the investigators. Lawyers from the General Counsel’s Office kept watch on the SSCI people. Last December, when senators began asking questions about the so-called “Panetta Report,” a CIA document constructed to broadly review the set of evidence SSCI inquisitors might view, Langley went into convulsions. The CIA claimed the Senate intelligence committee had no right to view the document. The spooks claimed it was “predecisional”–a category of secrets that supposedly shields documents leading to presidential choices but which in fact has been manipulated to deep six everything from official histories of the Bay of Pigs to this very same Panetta Report, which had nothing “decisional” about it.

If Mr. Obama’s rationale in 2009 lay in avoiding a waste of staff time and principals’ attention on these delicate matters, that turned out to be a bad judgment call. It’s a fair estimate that by now more time and effort has been expended attempting to avoid an investigation than would have been invested in one had it occurred. And given the nature of the latest developments it is probable that a real inquisition is coming.

The CIA lawyers went berserk. Two of them, along with several agency IT specialists, shared access to the database network that had been set up for the SSCI investigators. From what has emerged thus far it appears the lawyers orchestrated a penetration operation into the Senate’s network and had their IT people carry it out, creating a fake identity and entering the database on multiple occasions, disguising their intrusions. Among other things, they discovered the senators already had the Panetta report.

Advisers made this an issue for CIA Director John Brennan, who became their champion. On January 15 he went to Senator Diane Feinstein, chairwoman of the SSCI, to accuse the committee of breaking secrecy regulations. Brennan threatened to file a criminal complaint with the Department of Justice. Feinstein accused the CIA of breaching the security of its computer network–and violating the separation of powers provisions of the U.S. Constitution. On January 30 the CIA went ahead, its lawyer Robert Eatinger writing Justice to seek a criminal prosecution of SSCI investigators. Brennan also instructed inspector general David Buckley to review the SSCI’s allegations against the agency. And he ordered intrusions into the Senate’s computers to be halted.

Inspector General Buckley found that the CIA’s criminal referral to Justice was phony–”the author of the referral had been provided inaccurate information on which the letter was based.” Put differently, the CIA lawyers, thoseguardians of truth, law, and the American way, lied to instigate this action. The maneuver was entirely about the chilling effect it could have on the Senate investigators–who all this time were waiting for the CIA to act on the declassification of their torture report, and had become increasingly restive in demanding its release. Langley’s lawyer here, Mr. Eatinger, has a conflict of interest–he played a significant role in the CIA torture project and is a prominent character in the SSCI report. Eatinger should have recused himself. The CIA has had access to the intelligence committee report for more than eighteen months and Eatinger certainly knows what it has to say about him. The twin facts that he participated in this manipulation, and that CIA brass permitted him to do so, throw a blinding light on the collapse of the agency’s integrity. It has none left.

Equally ominous, the CIA Office of Security started its own investigation of the alleged SSCI security breach after Director Brennan ordered his minions to cease and desist. The Office of Security penetrated the Senate computers again and looked at email traffic while also conducting keyword searches. According to Inspector General Buckley the agency security officials were not aware of Brennan’s stand down order.

On March 11 Senator Feinstein took the floor to deliver a speech laying out her view of this case, which has been completely affirmed by the CIA inspector general. Director Brennan’s response to the Feinstein speech was to assert the CIA has a duty to make the SSCI report “balanced and accurate.” Former CIA director Michael V. Hayden argued that Feinstein had gotten too “emotional.” Cheerleader Hayden, of course, is a principle character in the SSCI report. Attorney General Holder has declined to prosecute anyone in Congress based on the bogus CIA complaint. On April 3 the Senate committee voted to release the report’s summary and recommendations sections. Today, four months later, the public still awaits executive action.

Inspector General Buckley issued his conclusions on July 18. This puts new light on the odd interplay that occurred around that time where former CIA directors like General Hayden were told they could review the torture report in advance of its release while lesser fry, first informed they could do so also, had that approval revoked. The criminal referrals may be going the other way.

News of the Buckley report appeared this past week. The latest damage control gimmick, needless to say, is to release this inflammatory news more than ten days after it was available on the classified level, and on the eve of Capitol Hill’s summer recess. No question but that CIA and the White House hope all this will be forgotten before Congress returns to work.

But for that one day Washington has been in an uproar. President Obama’s spokesman assures us that CIA’s Brennan enjoys his full confidence. Chairwoman Feinstein has been notably reticent, but her Republican vice-chairman is demanding the heads of those who breached the computers. Senator Mark Udall has called for Brennan’s resignation. Senator Jay Rockefeller commented, “it shouldn’t take five months and an Inspector General investigation for [Brennan] to know and acknowledge what is happening inside the agency he runs.”

And that is exactly the problem. The CIA is so consumed with manipulating this outcome that its integrity has been compromised. And Mr. Obama, by his blind support of a corrupted process, has played a contributing role. There is no easy way to say this. The entire matter of the torture program needs to be taken out of the hands of our line officials. I have, for months, been advocating a national commission–for the NSA abuses as much as these. It should now be obvious that that is the only way forward.