Gordon Martel is the author of The Month that Changed the World: July 1914 (Oxford).

It has been widely accepted that the 1914 assassination of the Archduke of Austria-Hungary, Franz Ferdinand, largely set in motion the events that directly lead to World War I. We’ve learned, time and time again, that he was assassinated by Gavilo Princip, a member of the Serbian Anarchist group, The Black Hand. But who was Franz Ferdinand? Many of our history classes paint him as a seminal figure in WWI studies without really offering any personal insights into his character and personal nature. Here are three things you probably never knew about Franz Ferdinand. You may find it surprising how universally despised he was at home and abroad.

He had a very special ‘personal’ reason for scheduling his visit to Sarajevo, where he was assassinated on 28 June: it was the anniversary of the ‘oath of renunciation’ that he had been forced to agree to in order to get his uncle the emperor to agree to his marriage to the Countess Sophie Chotek. As a mere aristocrat, marriage to her was deemed to be beneath an heir to the Habsburg throne. In the oath he was forced to agree to a ‘morganatic’ marriage – she was never to be considered royalty, and their children were not eligible to inherit the imperial crown. Sophie was routinely humiliated at court: the archduke would head any procession, while she would come last, walking alone; she could not sit at the head table during state dinners, could not share the royal box when attending the theatre or the opera. But at Sarajevo, as the wife of the inspector-general of the Austro-Hungarian armed forces, she took pride of place – and as a result was seated next to the archduke in the limousine that carried them through the streets of Sarajevo on the day the Archduke would die.

He was widely despised in Vienna and Budapest. His bad temper and outspoken views had, by 1914, become legendary in court and military circles. He routinely flew into rages at the smallest slight to his dignity. Once, when travelling in the royal carriage conveying him to a meeting with the German Kaiser, he decided that it was not up to his standards – whereupon he drew his sword and hacked the upholstery to pieces. He particularly despised the Magyars who ruled Hungary – and they knew it. He sneered at the traditional dance of the Hungarian hussars (the czardas) as an ‘animal dance’ and promised to do away with it when he became emperor. The Magyars should ‘never have come to Europe’ and he planned to reduce their influence once he came to power. When the first assassin who failed to kill him was seized on June 28th 1914, Franz Ferdinand was reported to have said, ‘Hang him as soon as you can, or else Vienna will send him a decoration.’

He was looking forward so much to the death of his uncle Franz Joseph, that he secretly commissioned a portrait to be painted of himself wearing the full regalia of the emperor. When Franz Joseph (age 84) fell seriously ill in the spring of 1914 Franz Ferdinand had his private railway car placed on standby at his castle in Prague to take him to Vienna immediately upon the emperor’s death. He looked forward to his uncle’s demise: when he replaced him he intended to ask the Pope to annul the morganatic oath that he had sworn on a bible in front of the Habsburg family; his friend, Kaiser Wilhelm II, had already indicated that he would recognize Sophie as empress.

It should be common historical knowledge that Franz Ferdinand was not a good man. Although he was assassinated as a result of his empire’s political dealings and not his personal nature, it is still worthwhile to understand that his toxic personality did not help his chances of survival. 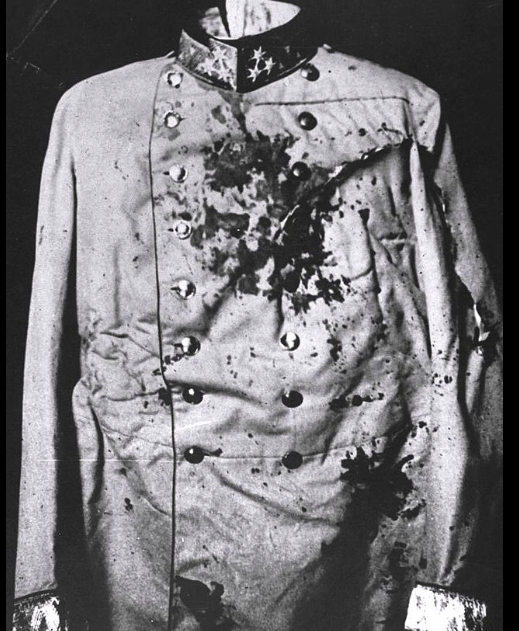 His Uniform After Assassination