Ruth DeFries is a geographer and ecologist at Columbia University in the city of New York and author of the book "The Big Ratchet: How Humanity Strives in the Face of Natural Crisis" by Basic Books. Yoiu can find out more about the book at her website. 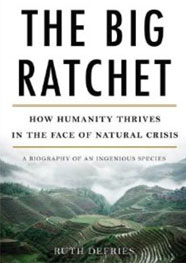 Archaeologists travel to faraway places to collect clues about the deep history of humanity. Anthropologists dig for decades to extract bones and skulls that place Homo sapiens in the larger context of our hominid ancestors. But ecologists need to go no farther than their local corner grocer. Evidence of the complex, multi-millennia, co-evolving interaction between people and the planet’s life support system abounds on every shelf.

In just two hundred thousand years, a blink compared to the 4.5 billion year history of our planet, we have become the only species whose members live mostly in cities and subsist from food produced by a minority. How humans became a world-dominating species that produces enough surplus food to support so many people in cities raises questions that cannot be answered by archaeologists, anthropologists or ecologists alone.

The answer lies, paradoxically, in the problems created by humanity’s attempt to extract food from nature. Each innovation ratcheted up the amount of people that the planet could support. Each ratchet ran up against a limit, which propelled a pivot to another innovation in a continual cycle of crisis and growth.

The path to our exceptional existence was set in motion with the transition from forager to farmer that began about twelve thousand years ago. With settled life made possible by surplus grains, population grew many times faster than before the transition. But the transition created new problems – diseases such as tuberculosis and smallpox from crowding and close proximity to livestock; starchier and less diverse diets; shorter stature than the farmers’ forbearers; and, most notably, a commitment to replenish the soil’s fertility as each harvest sucked away nutrients for the next crop.

The problem of depleted soil fertility led to new innovations that in turn ratcheted up the ability to produce even more food for growing numbers of people. The ancient Chinese supported urban populations for millennia by carrying all kinds of waste, including human excrement, from towns back to the countryside to fertilize the soil. Such was the case in cities of England’s Industrial Revolution until the amount of waste was so great that hauling it all away became insurmountable. Then, another innovation, bird guano transported from South America, kept European soils fertile until that source was depleted towards the end of the nineteenth century. Phosphorus in bones scattered across the North American prairie from the slaughter of bison became another source for scarce fertilizer.

Each solution created new possibilities to keep soils fertile. And each solution inevitably became intractable and led to another search for the next pivot. In the early twentieth century, Fritz Haber’s discovery to synthesize nitrogenous fertilizer from the air, combined with phosphorus dug from geologic deposits of phosphate rock, unshackled humanity from dependence on excrement and other organic wastes to keep soils fertile. Like the other temporary solutions, these too brought their problems - oxygen-depleted waters and geopolitical insecurities as the world’s food supply became tethered to a small number of geologic deposits around the world.

As the twentieth century unfolded, synthetic fertilizer, fossil-fuel energy, irrigation, pesticides, and advances in plant breeding created the ability for humanity to produce an abundance of food unprecedented in human history. The ratchet turned so far that if each person received an equal share (which they obviously do not), there was more to go around by the end of the century despite the explosive growth in population.

The long arc of humanity’s ecological history shows a pattern. Any manipulation of a system as complex as the planet’s life-supporting apparatus is sure to create problems of one sort or another. Each solution was temporary. Bird guano, groundwater and other resources that nature built up over geologic time scales were rapidly depleted. Other solutions, such as synthetic fertilizer and fossil fuels, create problems of excess that pollute water and the atmosphere and enable diets overly-abundant in unhealthy sugar and fat. The trajectory shows that culture and ecology intertwine as problems lead to solutions and solutions lead to more problems.

The seemingly-banal grocery aisle is a museum of humanity’s many trials in solving the problems that settled life created. Potatoes, for example, reflect one solution, sixteenth century trade between the Old and New Worlds that added new species to diets around the world. Meat and dairy from grain-fed animals signify experiments with high-yielding, hybrid corn that spread across the Midwestern corn-belt in the early twentieth century. Abundance that our forbearers could not have imagined fill the aisles as a reminder of the innovations that humanity’s long accumulation of knowledge in manipulating nature made possible in the twentieth century. It remains to be seen whether these most recent experiments create problems that lead to new solutions – or to the undermining of the ecological foundations of civilization. If history is any guide, humanity will devise new solutions that in turn create new problems in a never-ending cycle.