Lee Wright is the founder of The History List. 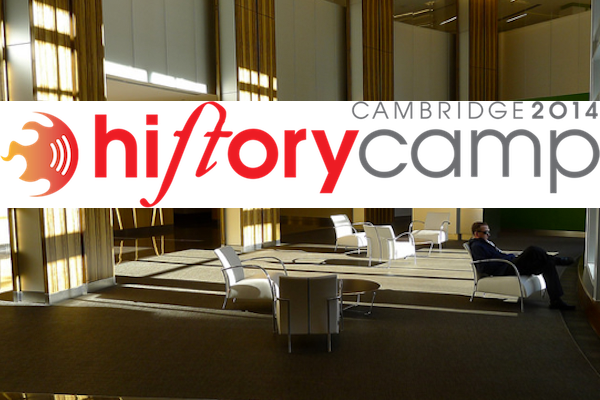 A group of volunteers in the Boston area is taking a unique approach to strengthening the local history community through a new event called “History Camp.”

With the stated goal of engaging more people with history, the event takes place March 8 in Cambridge, Massachusetts, and follows the “barcamp” (or “unconference”) format that was popularized in the tech community.  It consists of volunteers getting together and organizing a day or weekend of presentations for and with whomever wishes to participate.  Topics can be submitted the morning of the event; all participants are also encouraged to present.  It’s free, so anyone can attend.

“I attended Boston Barcamp at MIT a couple of years ago and found the format really compelling,” said Lee Wright, one of the organizers.  “Topics ranged from the arcane and highly-technical to the creative and intriguing.  It struck me as very democratic.  Anyone could propose a topic.  If people were interested, they attended.  If a session wasn’t what they thought, they quietly stepped out and found another session.  Some people were talking on a topic for the first time, others were world-renown experts.”

The first barcamp was held in 2005 in Palo Alto, and since that time barcamps have been held in more than 350 cities around the world.  A few are specific, such as focusing on health; most are open to any topic.

“This is the first time that there’s ever been an unconference for all things history, and the format enabled us to move quickly from brainstorming the idea in November to putting up the event wiki in December and opening registration in late January,” said Lee.

Other individuals helping get this off the ground include authors JL Bell, Sam Forman, and Liz Covart.

With about three weeks to go, nearly 100 people have registered and the list of topics submitted has grown quite long.  Most fall into one of a few categories: Historical events, research methods and tools, graduate programs, employment options, publishing, and managing a history organization or historic site.

“There’s been such an interesting response, with several authors and widely-followed bloggers, individuals engaged in history organizations in their communities, an attorney, an illustrator, a graphic designer, grad students, entrepreneurs, and on and on,” said Lee.  “The topics are just as fascinating, including "The Boston Bankruptcy That Led to the American Revolution", "John Singleton Copley in America: What is Real and What Imagined in the Iconic Portraits of Patriots and Tories?", "How the Patriots Almost Lost the Battle of Saratoga: Yankee-Yorker Jealousy in the Commissary Department", "Becoming a Historian: How to Apply to and What to Expect in Graduate School", “Bring History to the Classroom: Marketing your Historical Society or Museum to Teachers", “The Temperance Movement: A Doorway to Suffrage", "Becoming a published author: Panel discussion with authors and publishers on different mediums and models", "NodeXL Workshop: Using Social Network Analysis in History", and "Crowdsourcing Possibilities Relating to a Collection of Revolutionary-era Newspapers."

Most of those registered are from New England, with one person attending from NYC and two students from other countries, Saudi Arabia and Australia.

The organizers are all volunteers.  IBM is making their new Client Center in Cambridge available.  Wiley is underwriting lunch, TrekSolver is underwriting morning coffee, The History List is underwriting the afternoon break, and Hstry, a new venture just moving to the States from Belgium, is also providing financial support to help cover the costs.

History Camp runs from 9 am to 6 pm at the IBM Client Center Cambridge at One Rogers Street.

It's free and open to anyone, but you’re asked to register to ensure that you have a spot.  To register or browse the entire list of topics that have been submitted as well as the list of who is attending: http://historycamp.eventbrite.com.

Later that evening the reenactment of the Boston Massacre takes place at the Old State House in Boston.

The event wiki is at www.HistoryCamp.org.

The hashtag for the event is #HistoryCamp.

Presenters will be asked to make their presentations available, with that tag, on Slideshare.