Why Was Enoch Powell Condemned as a Racist and Not Charles de Gaulle? 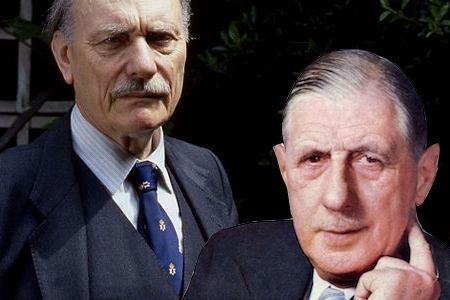 The French and British empires historically had different premises, with the former (in the Roman tradition) focused more on culture and the latter more on race, hierarchy, and family. This difference took many forms: one finds meals of bifteck-frites in tiny towns in the former French colony of Niger but little English food even in the cities of neighboring Nigeria. Léopold Senghor of Senegal became a significant French poet and cultural figure whereas Rabindranath Tagore of Bengal could never transcend his Indian origins.

Likewise, French and British politicians responded to the initial post-World War II immigration of non-Western peoples to their countries in characteristically different ways. Charles de Gaulle, arguably the most important leader of France since Napoleon, focused on culture while Enoch Powell, a rising star in the United Kingdom, emphasized race. Here are their speeches on the topic, starting with de Gaulle (1890-1970), who spoke on March 5, 1959:

It is very good that there are yellow French, black French, brown French. They show that France is open to all races and has a universal vocation. But [it is good] on condition that they remain a small minority. Otherwise, France would no longer be France. We are still primarily a European people of the white race, Greek and Latin culture, and the Christian religion.

Don’t tell me stories! Muslims, have you gone to see them? Have you watched them with their turbans and jellabiyas? You can see that they are not French! Those who advocate integration have the brain of a hummingbird. Try to mix oil and vinegar. Shake the bottle. After a second, they will separate again.

Arabs are Arabs, the French are French. Do you think the French body politic can absorb ten million Muslims, who tomorrow will be twenty million, after tomorrow forty? If we integrated, if all the Arabs and Berbers of Algeria were considered French, would you prevent them to settle in France, where the standard of living is so much higher? My village would no longer be called Colombey-The-Two-Churches but Colombey-The-Two-Mosques.

Enoch Powell (1912–1998), a conservative British politician, gave his “Rivers of Blood” speech on April 20, 1968, in which he predicted disaster because of large-scale immigration of colored people to the United Kingdom. He began by noting what was taking place: a

total transformation to which there is no parallel in a thousand years of English history. In fifteen or twenty years, on present trends, there will be in this country 3 ½ million Commonwealth immigrants and their descendants. … Those whom the gods wish to destroy, they first make mad. We must be mad, literally mad, as a nation to be permitting the annual inflow of some 50,000 dependents, who are for the most part the material of the future growth of the immigrant-descended population. It is like watching a nation busily engaged in heaping up its own funeral pyre.

In addition to ending immigration, Powell called for re-emigration, or the return of immigrants to their countries of origin.

If all immigration ended tomorrow, the rate of growth of the immigrant and immigrant-descended population would be substantially reduced, but the prospective size of this element in the population would still leave the basic character of the national danger unaffected. This can only be tackled while a considerable proportion of the total still comprises persons who entered this country during the last ten years or so. Hence the urgency of implementing now the second element of the Conservative Party’s policy: the encouragement of re-emigration.

He also wanted to end what he perceived as favoritism toward immigrants:

all who are in this country as citizens should be equal before the law and that there shall be no discrimination or difference made between them by public authority. … This does not mean that the immigrant and his descendants should be elevated into a privileged or special class or that the citizen should be denied his right to discriminate in the management of his own affairs between one fellow citizen and another.

On this topic, Powell soared rhetorically:

There could be no grosser misconception of the realities than is entertained by those who vociferously demand legislation as they call it “against discrimination”, whether they be leader-writers of the same kidney and sometimes on the same newspapers which year after year in the 1930s tried to blind this country to the rising peril which confronted it, or archbishops who live in palaces, faring delicately with the bedclothes pulled right over their heads.

To be integrated into a population means to become for all practical purposes indistinguishable from its other members. Now, at all times, where there are marked physical differences, especially of colour, integration is difficult though, over a period, not impossible.

And on to the finale:

As I look ahead, I am filled with foreboding. Like the Roman, I seem to see “the River Tiber foaming with much blood.”

(1) These two statements have much wider support today than when they were delivered, 54 and 45 years ago, respectively.

(2) At the same time, no major politician today would dare speak as directly as these two did back then.

(3) Islam, today’s emphasis, is nowhere even hinted at. De Gaulle spoke of “turbans and jellabiyas,” not Shari`a and honor killings. Powell referred to “marked physical differences, especially of colour,” not Islamic supremacism or female genital mutilation.