Spotlight on the Digital Humanities at GMU's THATCamp Prime

by Lincoln A. Mullen

Lincoln A. Mullen is a PhD candidate in the history department at Brandeis University and a historian of religion in early America and the nineteenth century. Follow him on Twitter @lincolnmullen 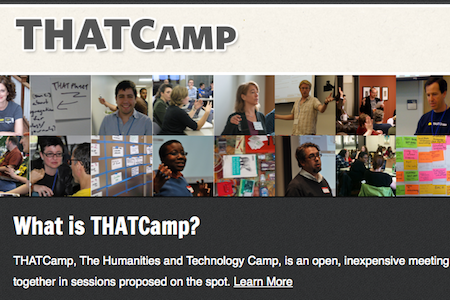 On June 7 and 8, the Roy Rosenzweig Center for History and New Media hosted its annual THATCamp Prime, an “unconference” about The Humanities And Technology. THATCamp started at CHNM in 2008 -- hence the name “prime” -- but since then there have been over one hundred fifty around the world. THATCamps draw professors, graduate students, librarians, archivists, and educational technologists for informal discussions (that is, no reading of papers) and hands-on workshops about how the humanities can take advantage of the possibilities of new technologies. THATCamps have been or will be hosted by major academic conferences, including the American Historical Association, the Modern Language Association, the American Academy of Religion, and the Organization of American Historians.

What significance do all these THATCamps, and in particular the recent THATCamp Prime, have for the historians as they confront the digital age? Perhaps I can answer that question by describing some of the sessions that I attended at CHNM and drawing out their connection to the profession.

There were two kinds of sessions at this year’s THATCamp Prime. The first were the discussion sessions for which participants proposed topics. Topics ranged from data visualization to new models of publishing, from writing computer code to digital humanities for beginners. The second kind of sessions were workshops where an expert taught some skill to all interested comers. These included workshops on teaching digital history, printing three-dimensional objects, and using GIS. A third part of THATCamp was the Maker Challenge, a competition to make something of value over the course of two days.

A first session of interest, led by Sharon Leon, was a discussion about how digital historians can connect with one another. More and more historians are using digital research methods, such as databases, text mining, visualization, and mapping with GIS. Just as a historian might be the only scholar in a department to study a particular time or place, so a historian might the only person to use digital methods. But whereas academic fields tend to have their own conferences and journals, and their practitioners receive specific training in graduate school, digital historians have less robust institutional structures, and they may be learning digital methods on their own. Such historians connect across informal networks and meet at THATCamps or other conferences. The primary outcome of this session was that Leon set up an online network for digital historians and fellow travelers, which has attracted over 160 members in the past two weeks, along with collections of resources. Anyone can join the site here.

A second matter of concern to historians is how to teach digital history. At a workshop on this topic, Jeff McClurken shared his teaching expertise.* In some of his courses, McClurken makes the primary assignment a digital project. So far from replacing research and writing, these digital projects spur students to further research and more detailed writing. For example, in one project students mapped Virginia’s historical markers and researched the history behind them; in another project, students gathered documents and media about civil rights leader James Farmer. In extensive notes, as well as a video of the session, McClurken explains how he runs his project-based classes, which I like to call history class as shop class.

A third set of interest were workshops on how to use digital methods. I attended two, both taught by Fred Gibbs. The first was about how to use the statistical programming language R to do text mining of large scale corpora. This kind of “distant reading” can be seen, for example, in Gibbs’s own work with Dan Cohen on a Google corpus, or Benjamin Schmidt’s continuing work at his blog on text mining. The second was a session on how to use the free, open-source software QGIS to make maps that layer data, current maps, and historical maps. As history is increasingly going through a spatial and transnational turn, the ability of historians to make their own maps and do their own analysis is a powerful tool.

The promise of some of these interest sessions can be seen in the winning entries for the maker challenge.

The first-place entry was by Boone Gorges. Boone wrote a WordPress plugin that connects a blog -- say, for a scholar, or a museum -- to related items in the Digital Public Library of America. Boone’s entry demonstrates one of the potential advantages of writing in a digital medium, which offers the possibility for transparency in writing, as well as combining sources and analysis. Along the same lines, the second-place entry was by Aram Zucker-Scharff, who made a ebook collection of the Archives of THATCamp, collecting all of the posts and notes taken at many different THATCamps around the country. There was also a session on new forms of publishing.

Abby Mullen** made an argument for her third-place maker challenge. She compiled data about 3,400 officers of the early American navy and performed a statistical analysis about the probability and length of time to promotion, to argue that historians may have misunderstood mobility within the navy. One of the potentials for digital humanities is to revisit the kind of data gathering and analyses of social history of several generations.

One of the runners-up for the maker challenge was Patrick Murray-John’s plugin for Omeka, a “web-publishing platform for the display of library, museum, archives, and scholarly collections and exhibitions.” Indeed, if any one thread of interest to historians ran through the THATCamp, it was Omeka. There were workshops ranging from the very basics of how to use Omeka, to the more advanced skills such as writing plugins for Omeka, a session led by Murray-John. Historians are increasingly turning to tools like Omeka to craft digital collections and narratives that go alongside more traditional forms of scholarship.

There were many more sessions of interest to historians, to which this brief report cannot do justice, and of course scholars from other disciplines had their own interest. Notes from many of the sessions can be found at the blog of this year’s THATCamp, so you can find out more information. But you can also find out what a THATCamp is like for yourself, since the chances are good that a THATCamp is coming to a university or professional organization near you.

*I didn’t attend this session at THATCamp Prime, but I did attend McClurken’s workshop on the same topic at THATCamp AHA 2013.