Digital Humanities in the Spotlight at PhillyDH@Penn

Tuesday, June 4, found just under two hundred very excited people gathered on the sixth floor of the Van Pelt Library at the University of Pennsylvania for PhillyDH@Penn sponsored by PhillyDH, a consortium of "universities libraries / archives, museums, cultural institutions and digital media innovators." 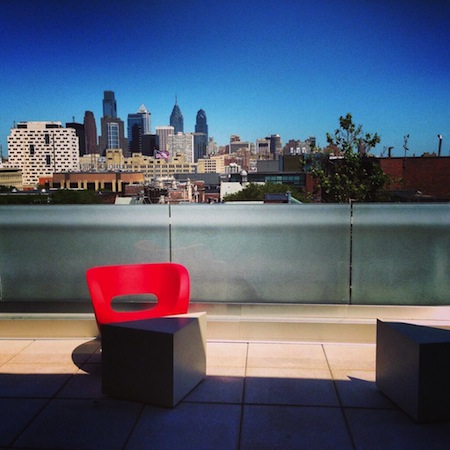 View from the sixth-floor balcony. Photo Courtesy of Jen Rajchel.

Like the other unconference I attended this year, THATCampFeminism East, the buzz at PhillyDH was intense. I arrived early and stationed adjacent to the coffee, I ran into many people I knew both from Twitter and recent face to face digital history conferences, like Women’s History in the Digital World. As compared to the American Historical Association annual meetings... Well, there is no comparison. People are far friendlier (no doubt in large part due to the absence of the job search hustle, but also because of the unconference ethos and the fact that you’re more likely to see someone’s Twitter handle on their name tag than their title or affiliation). 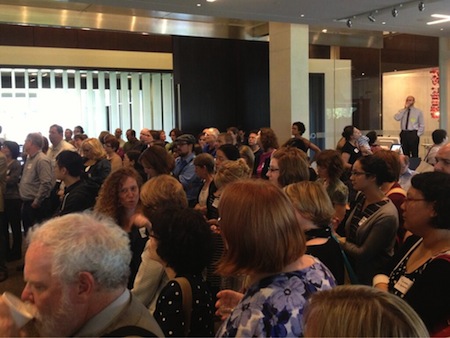 Digital humanities tends to draw a board range of participants: librarians, archivists, instructional technology and design people, as well as museum curators and academics from many disciplines. I’m happy to say historians were well represented and that the formal workshops and “unconference” sessions had much to offer to the emerging digital historian.

The morning kicked of with a welcome from Will Noel, Director of Special Collections Center & Director of Schoenberg Institute for Manuscript Studies who pointed out the helpers, in bright green shirts, along with quiet spots for reflection, room set aside for impromptu discussions, as well as the logistics of the day.

Participants pre-enrolled in morning and afternoon workshops that dealt with applications ranging from WordPress and Omeka to Drupal and Google Fusion Tables. In between these workshops, we convened as a group to listen to participants pitch their proposed sessions. For those of you not familiar with the unconference, sessions are generated by user interest and willingness of participants to lead workshops. Since space was not an issue, the organizers set a target goal of forty sessions over three time slots. Twenty-six sessions took place. Participants voted with their feet, attending whatever sessions caught their fancy. 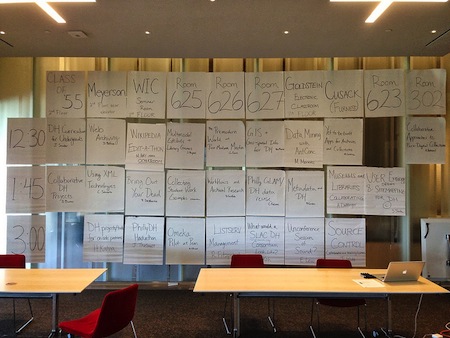 As I led one session, I was only able to attend two others, but I networked with friends and colleagues, and followed on Twitter and open Google Doc session notes enough to get to the sense that a wide range of discussions ranging from the practical to the theoretical occurred alongside a hackathon headed up by historian John Theibault and a Wikipedia Editathon spearheaded by Mary Mark Ockerbloom, Wikipedian In Residence at the Chemical Heritage Foundation.

If we think of digital history as four separate, but inter-related things we can see that the four “ps” (or flavors as Trevor Owens calls them) producing history, preserving history, presenting history, and programming for history, were all well covered. The session spreadsheet has, in most cases, links to the session notes. I’m going to highlight just one of each here to give you an idea, but I encourage you to read through the session notes for the others.

Data Mining with AntConc my session introduced participants to an online concordance tool, AntConc, which mines large bodies of texts to produce linguistic analyses. The tool is akin to the more popular topic modeling, but produces different sorts of relationships and results that I’ve found particularly useful for historical research.

Yet-to-be-built Apps for Archives & Collections highlighted the ways that digital history hinges on collaborative work between historians, archivists, and librarians, a recurrent theme of #PhillyDH.

Multimodal Exhibits and Library Games looked to be an absolutely fascinating discussion about “a multimodal exhibit at the Haverford College Libraries that brought an early eighteenth-century murder mystery to life that drew together various materials from Haverford’s Quaker and Special Collections to ask “Who Killed Sarah Stout?”

I snagged a spot in the Scrofulous Sport of Screen Scraping: A Tutorial for the Tyro led by Joe Joergensen from Rutgers Law. He deftly wove in the rationale for scraping, to create a permanent archive of materials that might be politically censored in future, while showing us various uses of wget, some handy programming for automatically downloading content from the web.

There were as few workshops focused on teaching digital humanities. I attended an exciting discussion of digital humanities at small liberal arts colleges and Collecting Student (Digital) Work Examples by Anu Vedantham, director of the beautiful Weigle Information Commons. Sadly I missed DH Curriculum for Undergrads led by historian Janneken Smucker, but the notes look quite comprehensive.

I want to also highlight two sessions of particular interest to historians including Princeton history graduate student Dylan Gottlieb’s Workflows for Archival Research and Bring Out Your Dead: How emerging technology can (or can’t) transform memorials and biography, proposed by archivist Rob Sieczkiewicz.

The day concluded with a lightening round, two minutes project pitches, and a keynote “The Age of Scale” by Michael Edson, the Smithsonian Institution’s director of web and new media strategy. Sadly I had to dash out before it began, but let me whet your appetite for the video that will eventually come from Penn with the Ignite talk version.

If this report piques your interest in digital history, and you are in the Philadelphia environs, you can Join the PhillyDH Mailing List. Further afield, you can consult George Mason University’s website that lists upcoming THATCamps, the most common unconferences. You may also want to join digitalhistorians.org a virtual community to connect and encourage collaboration started this past week by Sharon Leon.