Ian Reifowitz is the author of Obama’s America: A Transformative Vision of Our National Identity. Cross-posted from the Huffington Post. 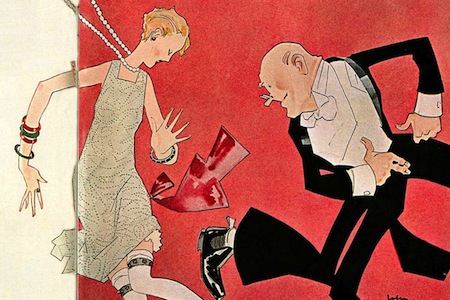 The middle class did great in the 1920s, says Amity Shlaes. Yeah, right. Until about October 1929 that is (hint: that's when the stock market crashed and the Great Depression began). Who is Amity Shlaes? She's the writer that UC-Davis historian Eric Rauchway, in an article in Dissent, tagged a "New Deal Denialist" as he took apart her "analysis" of the New Deal. Just one example among many: Rauchway noted that Shlaes used an older, out-of-date measure of the unemployment rate, one that just happens to count people who worked for New Deal programs like the W.P.A. as unemployed (!), thus adding an extra 5 percent on top of the real unemployment rate. Rauchway's article is a superb resource for anyone looking to counter New Deal deniers like Shlaes with actual, you know, facts.

But back to Ms. Shlaes most recent piece, titled, "The Myth of Gatsby's Suffering Middle Class." The novel, she argues, presents a false picture of the 1920s by arguing that the wealthiest Americans achieved great increases in their wealth only at significant cost to the middle class. This is inaccurate, Shlaes argues, as is much of the "economic history" presented in Gatsby. She begins by pointing out the supposed historical inaccuracies regarding the stock market presented by Nick Carraway, the narrator of the novel. Funny, I never thought of Carraway as an important source for economic history, but that's ok, let's see where Shlaes goes with this:

Nick Carraway informs us that the stock market is hitting extraordinary levels. But in the early 1920s stocks did not roar ahead like Gatsby's car. In the summer of 1922, around the time when the heroine Daisy visits Gatsby in West Egg, the Dow Jones industrial average actually stood lower than it had in the summer of 1919.

Wow. She's got a point there, right? But wait a minute. The Roaring Twenties didn't actually begin on January 1, 1920. As Shlaes knows well, there was a very real recession which bottomed out in 1921 and was caused largely by a post-World War I inflationary spike in prices.

So, in her assault on (not a) Professor Nick Carraway, Shlaes picked a time when the stock market was high -- i.e., right before a recession, to make a misleading argument that ignores the larger picture of the stock market in the Roaring Twenties. The reality is that the Dow went up six-fold -- that's 600 percent -- over eight years from its low in 1921 to its high point in October 1929.

So yes, Ms. Shlaes, even by the summer of 1922, the market was already off to the races, having gone up significantly from where it stood one year earlier. Given that this is the only economic "fact" in Gatsby that Shlaes challenges, you'd think she'd have been able to do better (and Daisy isn't the "heroine" either, by the way). But Shlaes used the data with a very specific purpose in mind, to get readers drawn to an article with a box-office smash in the title thinking that, hey, maybe everything I've learned about the 1920s is wrong, and that this person has got the truth.

Shlaes, after the first bit about Gatsby, then cites a litany of statistics about how middle-class and working-class life improved during the 1920s. By this point, after hoodwinking readers about Gatsby and the stock market, and bolstering her credibility as someone concerned about those in the middle -- and, by highlighting the decline in lynchings and in Klan activity as prosperity continued into the late twenties, maybe even her credibility among the Americans of color that conservatives are desperate to reach -- she delivers the point she's been priming her readers to accept, lock, stock, and barrel.

The larger argument is about conservative economic policy. Shlaes approvingly cites the idea that "if the rich prospered, the rest might do better than before." Classic trickle-down economics. The thing is, it's bunk. Economic inequality isn't a problem just because of the growing gap between the rich and the rest by itself, but because massive inequality is the sign of an unhealthy economy, one on the brink of collapse.

Inequality reached a new high on the eve of the Great Depression before falling and remaining relatively constant until the early 1980s, when Ronald Reagan moved our economic policies hard to the right. Inequality then grew again, rapidly, peaking just before the most recent crash, the Great Recession of 2008, one that, like the Great Depression, followed a sustained period of Republican control of the White House and both houses of Congress. Do we learn nothing from history? Apparently, that's what Amity Shlaes thinks.

But back to the 1920s. Shlaes asserted that all the wonderful improvements in middle-class life she cited in her article happened because of tax cuts and other policies that allowed the rich to get richer, because of which "good ideas found the capital needed to finance them." In conclusion, Shlaes modestly suggested "it might be useful to take some of the policies of the 1920s as models for today."

Yeah, maybe we should. Conservative, laissez-faire, "pro-business" Republicans held the White House from 1921 to 1933 (and held both houses of Congress from 1921 to 1931). Having ten years to fully implement their vision, these Republicans did great for middle-class Americans, right? Again, only if we pretend that history ended in October 1929.

The above graph of Gross Domestic Product in the U.S. shows that by the time the Republican reign was finally over in 1933, and FDR began ushering in the New Deal, all of the gains brought about by -- in Shlaes' words -- "the policies of the 1920s" were gone, drowned like the Great Gatsby in the pool of the Great Depression (sorry, couldn't resist). In fact, our GDP by the time FDR took office was, wait for it, just about right back down to where it was in the summer of 1922, the summer when Daisy visited Gatsby over in West Egg.

What was that, Ms. Shlaes, about economic myths and the 1920s?