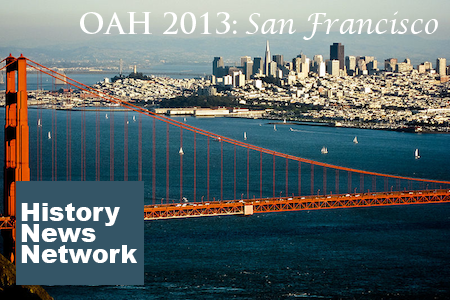 FROM SAN FRANCISCO -- San Francisco. Steep hills, charming cable cars, rolling breezes off the ocean, and people so friendly, strolling through Golden Gate Park at 9:00am on a Thursday morning will net an amiable young visitor in a tweed jacket no less than two offers for high-quality drugs.

Of course, it’s exceedingly unlikely that the Organization of American Historians picked San Francisco as the venue for its 2013 annual meeting because of the city’s famed history as one of the great hippie capitals of America. Forget the stereotypes of the friendly, mellow countercultural academic with hair in a ponytail. Even the staunchest of left-wing historians tend to tweed jackets and sensible shoes. Even the New Left historians of the 1960s -- the most prominent of whom, the late Howard Zinn, will be honored by a panel on Friday -- eschewed Aquarius for something approaching bourgeois respectability.

So why is the OAH in San Francisco this year from April 11 through the 14th? Partly due to tradition -- the meeting always rotates from region to region (last year, Milwaukee; the year before, Houston; the year before that, Washington, D.C. partly because San Francisco is a city that epitomizes the theme of this year’s conference, the entangled histories of the borderlands. San Francisco, as a port city melting pot of European, Asian, and Latino influences, certainly qualifies as a space of encounter.

Michael Regoli, one of the on-site organizers for the meeting, said that the number of pre-registers at this year’s conference -- 1,800 -- is down from 2,200 at last year’s joint conference with the National Council on Public History in Milwaukee. (The absence of the NCPH – which is meeting in Ottawa next week -- also explains why the social media buzz is more muted. Public historians have been much more comfortable tweeting and liveblogging.)

There’s another reason attendance is down this year: academic conferences on the West Coast tend to draw small crowds due to the proportionally smaller number of colleges and universities in this part of the country. California, the largest state in the union by population (38 million) and third-largest by area has 237 four-year colleges and universities within its borders; Massachusetts, with a sixth of California’s population and a fraction of its land area, is home to one hundred four-year institutions. Neighboring New York boasts over two hundred.

There’s something else missing from OAH 2013: a THATcamp, the digital humanities “unconference” popularized by George Mason University. Despite efforts to include digital humanities topics in the meeting program – at the Thursday afternoon panel “Research and Publishing in the Digital Age,” the University of Southern California’s Philip Ethington declared it is “utterly inevitable” that historians will soon start to publish digital projects in force – OAH organizer Regoli expressed disappointment that no THATcamp was organized for this Bay Area conference. “I mean, Silicon Valley’s right next door,” he said. The last THATcamp in the Bay Area met at Google headquarters back in 2011.

Still, despite the digital setbacks and geographical challenges, turnout is stronger than the 2011 meeting in Houston, which struggled to crack 1,300 participants.

OAH veterans will find most of the conference to be familiar. But both old hands newcomers – particularly graduate students, recent PhDs, and even the stray undergrad – can avail themselves of the expertise of Dr. Kate Duttro in the main exhibit hall. Duttro is a career coach for “recovering academics” seeking careers outside the ivory tower.

The OAH is taking the continuing jobs crisis in history and the broader adjunctization of higher education seriously, said Regoli. Duttro will continue as a career coach after the convention as one of the “benefits of OAH membership.”