Thomas Fleming is a former president of the Society of American Historians. His "Benjamin Franklin: The Man Who Dared the Lightning," has just been issued as an ebook, selling over 2,000 copies within twenty-four hours. Mr. Fleming is on the advisory board of HNN. 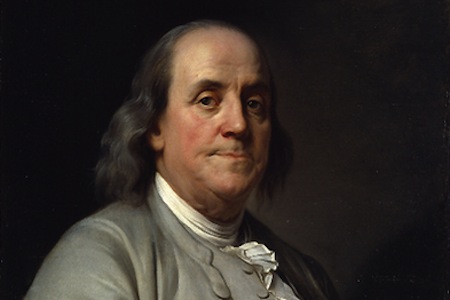 “I’ve been told by my friend Washington that you want to talk to me.”

“I summed up my attitude at the Constitutional Convention. I told them we’d created a republic -- if they can keep it. That says it all -- or at least quite a lot of what I thought -- and still think.”

“Without you, they might not have reached an agreement.”

“True enough. I saw the antagonisms boiling between perfectionists and realists and for a while wondered if I should have stayed home. It was no place for an eighty-one-year-old man with bladder stones that made it uncomfortable to stand up.”

“Perfectionists and realists. That’s an interesting way to look at politicians.”

“It’s still true. Now they call them liberals and conservatives. But my words are a better description of their real orientation. With some exceptions. Occasionally, there is such a thing as a realistic liberal and a perfectionist conservative. From what George tells me, the latter are rampant in your current Congress. They have an absurd name, which is doubly amusing to my Boston-born ears. The Tea Party. If only the University of Pennsylvania had taken my advice, and required each student to  major in history! It might have caught on, even at places as close-minded as Harvard.”

“You don’t think Tea Party is a good designation, from an historical point of view?”

“Only if you think Sam Adams was a conservative. Sam had only one ambition -- to stand the new world on its ears. He was a revolutionist. The tax on tea was only an incidental irritation, a good excuse to start the upheaval.”

“Didn’t you suggest that the Americans should pay for the ruined tea?”

“I still think we should have. That stuff was worth several million dollars in what passes for money in your 2013 banks.”

“How do you think we’re doing in regard to keeping a republic?”

“I only know what I hear from George, whose middle name would be Worry if such cognomens had been fashionable in our time. There are alarming tendencies to pure democracy here and there that could easily get out of control. Like those propositions that the birdbrains in California drop in the laps of their legislators, like unsolicited time bombs.”

“Would you suggest any improvements?”

“One change has occurred to me. There should be an amendment to the constitution that if no one wins a majority in an election, there will be a runoff between the top two contenders. This would considerably reduce the number of dimwits in Congress and maybe even in the White House.”

“Do you have an answer to our stupendous debt problem?”

“Not as long as we keep spending money. But there’s an axiom I enunciated in 1750 which might calm everyone’s nerves. Politicians never do anything but by necessity.”

“Did that have something to do with your proposal of a union of the American colonies?”

“Yes. In England I was immediately suspected as a revolutionary. In America I was accused of plotting to increase British authority over our local legislatures. It took Americans another twenty-five years to realize independence was the right answer.”

“Are there any other improvements you’d suggest to our politicians?”

“Quite possibly the most important idea every republic needs to survive. COMPROMISE. That’s how we got a Constitution. The smaller states started a huge brawl over how things would work in Congress. Someone suggested giving each state two votes in the Senate and a delegation based on population in the House of Representatives, which would control the purse strings. This kept Jemmy Madison from having a conniption at the thought of Delaware imposing taxes on mighty Virginia.”

“ Every politician should acquire a sense of humor. It’s surprising what you can accomplish with a joke. One day in 1777 I was in a Paris tavern when Edward Gibbon, the famed author of The  Decline and Fall of the Roman Empire, took a seat at a table on the other side of the room. I had met him several times in London. I sent him a note, inviting him to join me. The pompous ass replied that he could have no conversation with a rebel against his king. I told him I was sorry to hear he felt that way. I wanted to give him an idea for his next book, The Decline and Fall of the British Empire. The story was repeated in every salon in Paris in the next twenty-four hours and soon reached the French king’s ear in Versailles. I was later told it had not a little to do with inclining him to favor an alliance with the American rebels.”

“Have you retained your interest in science?”

“Of course. I seldom fail to pass a week without a conversation with Albert Einstein and his good friend, Isaac Newton. They’ve convinced me that interplanetary travel will soon be possible for our species. All it will require is a new understanding of Einstein’s theory of relativity. If we can keep nuclear weapons out of our wars for another century, space travel will be the answer to world peace. Recalcitrants like the Muslim jihadists who want to return to the seventh century can be rocketed to a habitable planet and given carte blanche to live as they please. Perhaps we’ll do the same thing with the extreme liberals and the extreme conservatives.”

“Have you reconciled with your wife and son William?”

“Of course. But they haven’t forgiven each other. There are some grievances that are eternal.”

“And Madame Helvetius, that charming lady you adored in France? Do you see her?”

“Of course. Our love has only deepened over the centuries. Even though she claims to remain devoted to her boring philosopher husband, whom my wife claims to worship -- mainly to provoke me. The French have a wonderful name for such mutual fascinations: amite amouresse. Friendship love. I predict the current generation of American youth will discover it in their later years and realize its superiority to their endless succession of hookups.”

“Do you still believe in God?”

“Of course. I don’t pretend to understand Him. Anyone who claims to do so is deceiving himself. But I’m convinced he’s somehow deeply involved in human affairs. I’ve become very friendly with that Jesuit fellow, Teilhard de Chardin. He’s convinced me that men and women are evolving spiritually in the same way that the earth and its plants and animals are evolving physically.”

“What gives you hope for America?”

“Barack Obama in the White House. Even though I don’t agree with half of what he’s doing. Future historians will see his elevation as a gigantic leap toward the greatest human goal -- universal brotherhood and sisterhood.”