Walt Richmond is professor of professor of Russian language and culture at Occidental College in Los Angeles. His latest book is entitled "The Circassian Genocide." 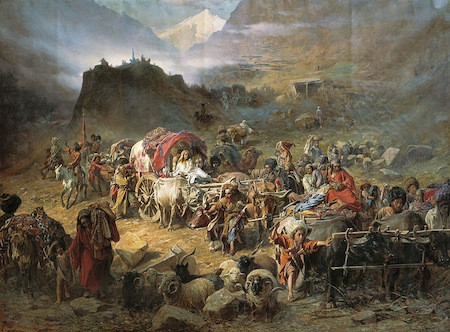 The mountaineers leave the aul by Pyotr Nikolayevich Gruzinsky, 1872.

The Circassians are a small ethnic group with very few relatives who had lived between the Crimean Peninsula and the central North Caucasus for about 4,000 years when the Russians invaded their homeland in the eighteenth century. The Kabardians, whose society was the most stable of all the Circassian tribes and who occupied the strategic central region of the north Caucasus, had been Russian allies for over two hundred years when they became the first victims. In 1763, Russia began their plan to conquer the region by building a fort in Kabardia, and war ensued. It remained a stalemate until 1805, when General Sergei Bulgakov blockaded plague-stricken Kabardia. After he determined that the Kabardians had been starved to the point where they could no longer resist he went on a rampage, burning villages and food supplies. Bulgakov was removed for his excesses, but his successor Alexei Ermolov escalated the war against the now defenseless and starving Kabardians to genocidal levels.

The most destructive campaign came in the winter of 1822, when Ermolov’s troops burned homes and food and rustled cattle, leaving the people to die from starvation and the elements. Often, they massacred entire villages. Ermolov’s rampage left the entire district of Lesser Kabardia, which had been perennially loyal to Russia, completely depopulated. Ermolov continued his destruction of Kabardia until 1827. As a result, the Kabardian population dropped from 300,000 in 1790 to 30,000 in 1830.

The war against the other tribes began in 1800, when Emperor Paul gave the Cossacks living in the region permission to raid Circassia. However, the conflict remained low-level and two sides actually began to cooperate and establish trade relations when the Ottoman Empire “ceded” Circassia to Russia in 1829. In fact, Ottoman control of Circassia was on paper only, but Emperor Nicholas I used the treaty as an excuse for a full invasion. The Circassians turned out be far more numerous than expected, however, and the Russians became frustrated and resorted to increasingly brutal tactics. By 1840, genocide was being considered as an option.

Despite Russian military superiority, the Circassians held their own until 1859, when the Chechens fighting the Russians to the east surrendered and the entire Russian Caucasus army focused on Circassia. In addition, Russian forces in the Crimea were moved up the Black Sea coast to hem the Circassians in. By now, the Circassians were militarily exhausted and in late 1859 all but two tribes signed a truce with the Russians and became “quite good neighbors,” as one Russian officer said. However, the treaty was a trick to allow the Russians time to put their armies in place.

On October 15, 1860, General Nikolai Evdokimov proposed what was perhaps the first ethnic cleansing in history. Officially, the Circassians were to be given a choice between settling to the north or immigrating to Turkey. However, eyewitness Mikhail Venyukov reported that Evdokimov stated privately that he planned to drive all the Circassians to Anatolia.
The Russians conducted the majority of their ethnic cleansing of Circassia between October 1863 and April 1864. Numerous massacres of unarmed men, women and children ensued. Those the Russians spared were driven to the coast in convoys, even peaceful clans to the coast who were willing to submit to any terms. The Russians refused to allow them to take provisions. Many fled to die in their cherished mountains, and unknown thousands died en route to the shore.

Once at the shore, the Circassians were left in the open air without food, water, and often even clothing. Disease and starvation ran rampant. Evdokimov was repeatedly told of massive casualties but did nothing. Word got back to Emperor Alexander II, who ordered his brother Grand Prince Mikhail to investigate. Mikhail reported back that there was no disease and plenty of food and water. Transportation to Turkey was delayed as Evdokimov quibbled over fees with private contractors, leading to more deaths. Once the survivors arrived in Anatolia they continued to die of disease, starvation and exposure, since the Russians had told the Ottoman government only 50,000 refugees were coming, when in fact it was closer to one million. The Turks were caught unprepared and despite repeated requests the Russians refused to stop the deportation. Throughout the entire process, at least 625,000 people died. About 30,000 were allowed to remain as agricultural advisors, although Evdokimov allowed the Cossacks to harass them in hopes they too would emigrate. As a result, the 1880 Circassian population was lower than it was in 1865.

Was it genocide? In the Kabardian case, it’s clear Ermolov intended to annihilate the population; he stated as much, and even joked when told the Kabardians were freezing to death after his rampage. With the ethnic cleansing of the 1860s, the Russians have always hidden behind the excuse that the event was a terrible tragedy, but that it wasn’t intentional. However, the archival materials make it clear that the Russians acted with gross disregard for the risks involved and sent men, women and children down the rugged Caucasus Mountains in winter without provisions, ensuring mass death among the weakest—women, children and the elderly. Rather than take steps to alleviate it, Evdokimov gave orders not to report it. Such actions, as genocide scholars Robert Gellately and Ben Kiernan explain, do rise to the level of genocide:
Genocidal intent . . . applies to acts of destruction that are not the specific goal but are predictable outcomes or by-products of a policy, which could have been avoided by a change in that policy.

This is precisely what happened in Circassia. Russia followed a policy that clearly threatened the lives of a large number of people (as a committee warned Evdokimov in 1861), and when the results of that policy became clear, they did not change course.
Unfortunately, the genocide was too far removed from European concerns to attract much attention. Britain, Circassia’s lukewarm supporter, was more interested in challenging Russia in Central Asia in the 1860s. After the Circassians disappeared from their homeland, the world forgot them. It is only recently, since the 2014 Winter Olympics was awarded to Sochi—ironically the location of Circassia’s first and only parliament—that some attention has been paid to the tragedy.