Confronting the Ugly Truth about America's Dirty War in Vietnam

William J. Astore, a retired lieutenant colonel (USAF), now teaches at the Pennsylvania College of Technology. His books and articles focus primarily on military history and include Hindenburg: Icon of German Militarism (Potomac Press, 2005). He may be reached at wastore@pct.edu. Originally appeared on Alternet and reprinted with the permission of the author. 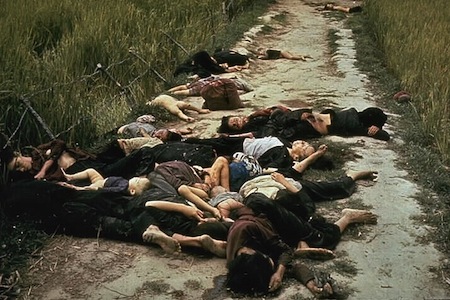 When I was on active duty in the Air Force, I visited the Vietnam Veterans Memorial in Washington, D.C.  I was moved to tears as I encountered the names of more than 58,000 of my fellow Americans etched in stone. "What a waste," I thought, "but at least they died for their country, and at least we didn’t forget their sacrifice."

To be honest, I don’t recall thinking about the Vietnamese dead. The memorial, famously designed by Maya Lin, captures an American tragedy, not a Vietnamese one. But imagine, for a moment, if we could bridge the empathy gap that separates us from the Vietnamese and our war with them and against them. How might their suffering compare to ours?

America first sent ground combat units to Vietnam in March of 1965. If we count the Linebacker II air offensive against North Vietnam in December of 1972 (the infamous Christmas bombing) as the end of major combat operations, the U.S. military waged war in Vietnam for roughly 93 months. Now, let’s consider the number of Vietnamese killed, to include soldiers and civilians, regardless of their political allegiance or lack thereof. No one knows for sure how many Vietnamese died over this period; the “low” estimate is roughly one million Vietnamese, while the “high” estimate is in the vicinity of three million. Even using the low estimate, that’s more than ten thousand dead per month, for 93 months.

How can we bring meaning to such mind-numbing statistics?  To imagine the impact of this war on the Vietnamese people, Americans have to think not of one tragic wall containing 58,000 names, but of twenty (or perhaps even fifty) tragic walls, adding up to millions of names, a high percentage of them being noncombatants, innocent men, women and children.

Difficult as that is to imagine, we must also recognize that the impact of the American war in Vietnam was not limited to killing. The U.S. military bombed and blasted and napalmed and defoliated the landscape as well. So along with twenty or more Maya Lin-type memorials to list all of the Vietnamese war dead, we’d have to imagine scores of “Super Fund” sites in Vietnam, land poisoned by Agent Orange and similar powerful chemicals, tortured terrain that is still occasionally deadly to the Vietnamese who live there.

How did so many Vietnamese come to die? How did Vietnam itself become a blasted and poisoned landscape? And how did the United States come largely to forget its complicity in the killing and blasting? The reasons are not easy to contemplate, but Nick Turse’s harrowing new study, Kill Anything that Moves, forces us to confront what he terms “the real American war in Vietnam.”

In A Rumor of War (1977), a classic memoir of the Vietnam War, U.S. Marine Lieutenant Philip Caputo recounts how the U.S. strategy of “search and destroy” and the obsession with enemy body count led to “orgiastic violence” in which the goal, in his words, was

“to kill Communists and to kill as many of them as possible. Stack ’em like cordwood. Victory was a high body-count … war a matter of arithmetic. The pressure [from the top] on unit commanders to produce enemy corpses was intense, and they in turn communicated it to their troops. This led to such practices as counting civilians as Viet Cong. ‘If it’s dead and Vietnamese, it’s VC,’ was a rule of thumb in the bush  It is not surprising, therefore, that some men acquired a contempt for human life and a predilection for taking it.”

The horrific reality that Caputo wrote of more than thirty-five years ago is now fully fleshed out in Turse’s new study. The obsession with body count—starting with General William Westmoreland, the commanding general in Vietnam—led to, in Turse’s words, “the indiscriminate killing of South Vietnamese noncombatants -- the endless slaughter that wiped out civilians day after day, month after month, year after year.” The enormity of the crime was “neither accidental nor unforeseeable,” but rather “the inevitable outcome of deliberate policies, dictated at the highest levels of the military,” Turse concludes.

The evidence he amasses -- of “murder, torture, rape, abuse, forced displacement, home burnings, specious arrests, imprisonment without due process” -- is irrefutable. Indeed, much of the evidence he relies upon was gathered secretly by the U.S. military at the time, only to be suppressed, consigned to archives, and forgotten. It’s hardly surprising that senior U.S. military officials sought to suppress evidence of atrocities on a mass-scale, since they themselves were both complicit and culpable.

A line that has always stayed with me from Caputo’s memoir came from one of his NCOs, a Sergeant Colby, who in 1965 told then-Lieutenant Caputo that, “Before you leave here, sir, you’re going to learn that one of the most brutal things in the world is your average nineteen-year-old American boy.” Turse’s study plumbs the depths of such brutality, to include a racist subculture (dehumanizing the Vietnamese as “gooks” and “slopes”) within the U.S. military that facilitated it. Draft an American teenager, teach him to kill, send him to an utterly foreign land in which he can’t distinguish friend from foe, give him power over life and death against a dehumanized enemy, and reward him for generating a high body count in which “If it’s dead and Vietnamese, it’s VC,” and you have an ineluctable recipe for murderous violence.

Contrast the brutal honesty of Sergeant Colby with the patent dishonesty of an American political scene that to this day fosters a very different interpretation of the Vietnam War. For many Americans, the true victims of the war are not the millions of Vietnamese who died, or the millions who continue to suffer to this day. No -- the true victims are the American veterans who were allegedly spat upon by unwashed anti-war protesters, or a U.S. military that was allegedly betrayed by back-stabbers at the home front, denying the troops the victory they had so justly earned. In this narrative, even the infamous slaughter at My Lai becomes the exception that proves the rule, the rule being that with few exceptions the American military fought honorably and cleanly.

For these Americans, the war remains a combination of the Rambo myth mixed with the “noble cause” rhetoric of Ronald Reagan -- history as Hollywood fairy tale -- a concerted rewriting of the historical record and a rewiring of American culture consistent with feel-good militarism and confectionary war.

To confront the truth, we must abandon the confection. The truth is that, rather than confronting our nation’s inner heart of darkness during and after Vietnam, the military and our government collectively whitewashed the past.

America’s true “Vietnam Syndrome” was not an allergy to using military power after Vietnam but an allergy to facing the destruction our nation caused there. And that allergy has only exacerbated our national predilection for military adventurism, warrior glorification, and endless war.