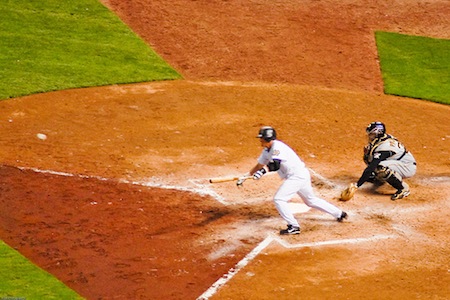 It is high noon Mountain Standard Time January 9th, and it is time to announce the Baseball Hall of Fame balloting for 2013 induction into Cooperstown. I am euphoric in anticipation that Craig Baggie of the Houston Astros will be selected in his first year of eligibility (players must be retired for five years to be eligible for selection). I have donned my Astros jersey and cap, planning to wear them for the remainder of the school day. It is not easy being a fan of Houston franchise. I have followed the team since their inception in 1962 as the Houston Colt .45s. During the following fifty years, they won one National League pennant, but were swept in four games by the Chicago White Sox in the 2005 World Series. I hope to see the club at least win a World Series game in my lifetime, but my hopes are dimming. For the last two seasons the Astros were the worst team in Major League Baseball—if they were in soccer they would have to drop down in classification—losing 105 games in 2011 and 107 games last season. And prospects do not look promising for 2013 as the franchise has been shifted from the National League Central Division to the even more competitive American League West.

But January 9, 2013 is going to be a different day for this Astros fan. No Astros player has entered the Hall of Fame wearing a Houston uniform—Nolan Ryan pitched for Houston but entered Cooperstown as a Texas Ranger. However, I was confident that the Baseball Writers of America would select Craig Biggio. After all, he amassed over 3,000 hits during his twenty seasons in Houston. An All-Star at three positions—catcher, second base, and outfield—Biggio drove in 1.200 runs and stole over four hundred bases in his career. His 668 doubles are fifth in Major League Baseball history. In addition, he played his entire career with one club, a sense of loyalty rarely demonstrated in the free agent era. In fact, I was so certain of Biggio’s selection that I was hoping that he might have a coattails effect on the election of his former teammate Jeff Bagwell, who also spent his entire career in Houston.

Working off these assumptions, I was quite shocked to learn that the writers had failed to select any player for 2013 induction into the Hall. I immediately called Cooperstown, New York to cancel my hotel reservations for the 2013 induction ceremony. Of course, Biggio and Bagwell will still be eligible for election in 2014, when they will be joined on the ballot by Gregg Maddox and Tommy Glavine, who each earned over 300 pitching wins; most of them with the Atlanta Braves. As is so often the case with Astros fans, we are left simply with the refrain of wait until next year. But how does one account for the failure to induct Biggio or other any other star from the 1990s?

The answer seems to be the type of guilt by association that we usually connect with McCarthyism in our history. Among the other first year eligible candidates on the ballot with Biggio were Barry Bonds, Roger Clemens, and Sammy Sosa; all of whom are assumed to have used steroids. Biggio was the top vote getter on the 2013 ballot with his name appearing on approximately 68 percent of the ballots submitted by the writers. However, to quality for selection into the Hall, one must be named on at least 75 percent of the submitted returns. The candidacies of Bonds, Clemens, and Sosa failed to muster even fifty percent of the vote. Certainly their association with steroids helps explain the lack of support, but what about Biggio, whose name has not been linked to performance-enhancing drugs? Some sportswriters insist that they will never vote for a player from the steroids era. They argue that all records from the period are suspect, and athletes who did not use steroids knew that other players were using, and this cheating was condoned by their silence. Bagwell and Biggio are somehow tainted by their friend and former teammate Ken Caminiti, whose steroid use contributed to the athlete’s premature death.

This guilt by association is the height of hypocrisy. After the 1994 strike which led to cancellation of the World Series, baseball interest was lagging until the exciting 1996 assault by Sammy Sosa and Mark McGwire upon Roger Maris’s single season home run mark. Major League Baseball ownership and the sportswriters celebrated the home run as the salvation of the sport, and when rumors of performance-enhancing drugs were whispered, everyone looked the other way. Major League Baseball even employed pitchers Greg Maddox and Tommy Glavine to promote the home run with an advertising campaign that featured the refrain that “chicks dig the long ball.” After the sport was saved by the long ball, there was a negative reaction in baseball and the general public when an arrogant Barry Bonds surpassed Hank Aaron’s all-time home run total. The sport was further embarrassed by the less-than-candid congressional testimonies of McGwire, Clemens, and Rafael Palmeiro. Even the sport’s powerful players’ union has now agreed to drug testing, but what about the records and players of the 1990s and the first decade of the twenty-first century?

Should all players be denied membership in the Hall of Fame because there was widespread drug use that was at least to some extent encouraged by baseball management and the now holier-than-thou sportswriters? Does this mean that athletes who played in the first four decades of the twentieth century should have their records questioned because they never had to face black pitchers such as the legendary Satchel Paige? And, of course, cheating has always been part of the game from stealing signs to doctoring the baseball, as Hall of Fame pitchers Whitey Ford and Gaylord Perry certainly acknowledge. Drug usage has also been part of the game from chewing tobacco to alcohol to the amphetamines which were prominently present in most clubhouses during the 1960s and 1970s. Issues of character have certainly been raised regarding players such as Bonds, Clemens, and Sosa, but the Hall of Fame has certainly found room for violent racists such as Ty Cobb. The Hall of Fame also has failed to induct the recently deceased Marvin Miller, who as executive director of the Major League Baseball Players’ Association revolutionized the game in the 1970s, but management figures such as Commissioner Bowie Kuhn are enshrined.

There is enough hypocrisy to go around. Bonds and Clemens enjoyed Hall of Fame careers before their names were linked to steroids, and after a period in purgatory it is likely that a new generation of sportswriters will elevate them to Cooperstown. And the players’ union and Major League Baseball have responded to the 2013 Hall of Fame voting by announcing a new anti-doping program that will make baseball the most highly monitored sport in North America. But in the meantime what do we do with the exceptional career of an athlete such as Craig Biggio? In January 2014, I will again don my Astros jersey and hat and reserve a hotel room in Cooperstown in anticipation of justice being served with Biggio’s election to the Hall, and it would be nice to see a Bagwell plaque as well.