Rick Shenkman is the editor and founder of the History News Network, the website that features articles by historians commenting on current events. He can regularly be seen on Fox News, CNN, and MSNBC. He is a New York Times best-selling author of six history books, including Legends, Lies & Cherished Myths of American History and Presidential Ambition: How the Presidents Gained Power, Kept Power and Got Things Done (HarperCollins, 1999), and Just How Stupid Are We? Facing the Truth About the American Voter.

His latest book is Political Animals:  How Our Stone-Age Brain Gets in the Way of Smart Politics (Basic Books, 2016).

Educated at Vassar and Harvard, Mr. Shenkman is an Emmy award-winning investigative reporter and the former managing editor of KIRO-TV, the CBS affiliate in Seattle. In 1997 he was the host, writer and producer of a prime time series for The Learning Channel inspired by his books on myths. In 2008 he was elected a Fellow of the Society of American Historians. He gives lectures at colleges around the country on several topics, including American myths and presidential politics.

How does a figure such as Donald Trump emerge to become the favorite for a Presidential nomination?  Many people are bewildered by it, but obviously, others find him stirringly brash.  Wednesday’s Topical Currents looks into some evolutionary factors which shape our allegiances, with journalist and History News Network founder, Rick Shenkman.  He’s written, POLITICAL ANIMALS:  How Our Stone-Age Brain Gets in the Way of Smart Politics. 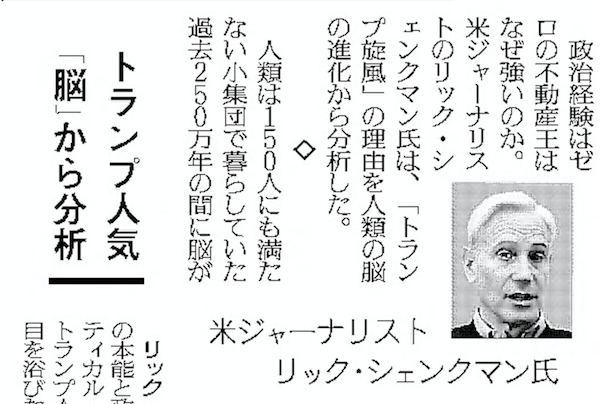 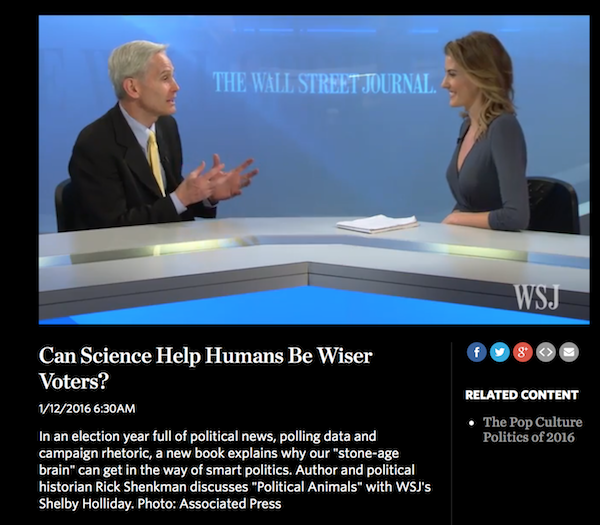 The [Intercollegiate Studies Institute] insists that higher-education reforms aimed at civic literacy are urgently needed. Who could argue otherwise? But historian Rick Shenkman, author of “Just How Stupid Are We?” thinks reform needs to start in high school. His strategy is both poetic (to certain ears) and pragmatic: Require students to read newspapers, and give college freshman weekly quizzes on current events.

Did he say newspapers?! Shenkman even suggests government subsidies for newspaper subscriptions, as well as federal tuition subsidies for students who perform well on civics tests. They could be paid from a special fund created by, say, a “Too Many Stupid Voters Act.”

Not only would citizens be smarter, but also newspapers might be saved. Announcements of newsroom cuts, which ultimately hurt quality, have become routine. Just this week, USA Today announced the elimination of about 20 positions, while the Newark Star-Ledger, as it cuts its news staff by 40 percent, lost almost its entire editorial board in a single day.

In his book, Shenkman, founder of George Mason University’s History News Network, is tough on everyday Americans. Why, he asks, do we value polls when clearly The People don’t know enough to make a reasoned judgment?

The founding fathers, Shenkman points out, weren’t so enamored of The People, whom they distrusted. Hence a Republic, not a Democracy. They understood that an ignorant electorate was susceptible to emotional manipulation and feared the tyranny of the masses.

PLAYBOY: It’s hard to believe that we’re stupider than voters in previous generations. Or are we?

SHENKMAN: Our parents and grandparents were smarter voters by some specific measures. Asked in the 1950s to articulate a single diffrence between the two main parties only 10 percent couldn't. By the 1980s, nearly 30 percent couldn't. By other measures we test at about the same knowledge level as past generations. But given how much better educated we are today that is an appalling finding. In 1940, 6 in 10 Americans hadn't gone past the 8th grade. Today most have some college education. And we're testing about the same by these measures?

PLAYBOY: Are we stupider than our leaders? And if so, does that encourage them to take advantage of us or manipulate us?

SHENKMAN: Our leaders are smart at manipulating us. They do it primarily by exploiting good old American myths. When you listen to a speech by a pol and feel really good at points during the speech it's almost always because you have been played. The politician has figured out a way to wrap himself in the flag or some other patriotic myth in which you deeply believe. Myths aren't lies. They are grand narratives rooted in our history and culture that tell us who we are and what values we cherish. Think the American Dream or Rags to Riches.

The most common myth politicians exploit is the log cabin myth. They all pretend to have been born, figuratively, in a log cabin like Abe Lincoln. Even the children of presidents like George W. Bush pretend to ordinariness and pull it off by the way they speak and the stories they tell about themselves. Bush bragging about how he was a C student at Yale is a perfect example. It humanized him and played into the myth that he was no better and no different than you or me, uh, except for the fact that his father was president of the United States.

But our politics are often stupid, and there are times when no other word, harsh as it is, seems to capture the essence of the turn politics has taken in recent years. In a democracy, how can the politics be stupid and the people not stupid?

Rick Shenkman: I want to be provocative by using the word "stupid," but I don't want to just insult people. I want to draw the attention of the public to this question of how do we get smarter voters.

Our politics are clearly dumb. I don't think there's too many people who would disagree with that. But we don't then take the next natural step and ask, how can smart voters be putting up with it?

The fact is the politicians count on people being dumb. They gear their statements, their speeches and their policies to people not getting things, and not understanding the complexity of issues. That's what I want to draw our attention to.

The long Iraq war. The bungled Hurricane Katrina response. The credit crunch. A quick look at the newspapers will give many voters reason to doubt the wisdom of America's political leaders. Unfortunately, Americans are doing little to educate themselves about their leaders and their policies, says bestselling author and George Mason University historian Rick Shenkman in his new book Just How Stupid Are We? Facing the Truth About the American Voter. Shenkman cites some damning facts to make his case that Americans are ill-prepared to guide the world's most powerful democracy. Only 2 of 5 voters can name the three branches of the federal government. And 49 percent of Americans think the president has the authority to suspend the Constitution. But, for Shenkman, the severity of the problem snapped into focus after Sept. 11, 2001, when polls showed that a large number of Americans knew little about the attacks and the Iraq war that followed. He blames some of the public's misunderstanding on the White House message machine, but he argues that Americans did little to seek the truth. "As became irrefutably clear in scientific polls undertaken after 9/11...millions of Americans simply cannot fathom the twists and turns that complicated debates take," Shenkman writes. Shenkman spoke to U.S. News about the competence of the American voter. [Interview follows.]

FP: So in your view, why are American politics so often about what you would term depressingly stupid subjects?

Shenkman: Why during the primary campaign did we talk endlessly about Barack Obama's bowling score and Hillary Clinton's grabbing a drink at a bar during a photo op? Why did voters listening to Obama swoon when he spoke when all he spoke about was "change" as if the very word "change" actually meant something concrete. Why did Clinton then start talking about "change" and then McCain? Would Lincoln and Douglas have talked about something as nebulous as "change" as a great theme of an election?

The answer is simple, though we don't like to admit it. Politicians conduct their campaigns at a distressingly low level because the voters don't know enough or care enough about politics to sit through a sober and rational debate about issues. Knowing this smart pols--and Obama, Clinton and McCain are all very smart--pitch their campaigns at low intellectual levels in order to connect with ordinary voters.

We like to blame the pols and the media for the empty-headedness of our politics--the proliferation of slogans, bumper stickers and the like--but it's the voters' limited knowledge and interest that is the underlying cause.