Blogs > Ronald L. Feinman > Who's Up, Who's Down in the latest CSPAN Presidential Ranking Poll

Who's Up, Who's Down in the latest CSPAN Presidential Ranking Poll 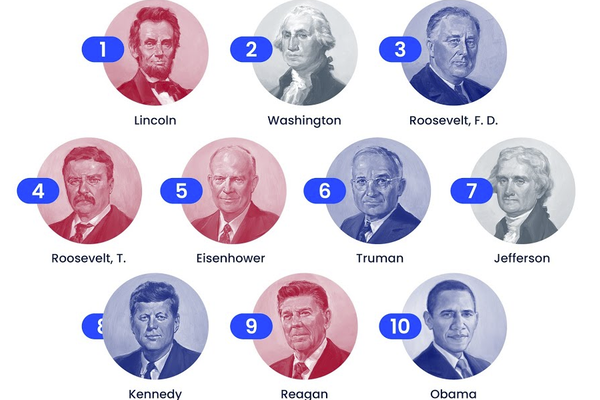 C-SPAN has just issued its fourth Presidential Historians Survey on June 30, following up on three earlier surveys in 2000, 2009, and 2017, and there is lots of food for thought in the results.

First of all, Donald Trump, in his first appearance in a survey after leaving office, is tied with Franklin Pierce for third from the bottom, ranking above only James Buchanan and Andrew Johnson.  Only in three of ten categories of Individual Leadership Characteristics evaluated in the poll does Trump rise above 40th place, reaching 32nd on “Public Persuasion,” 34th on “Economic Management,” and 36th on “Vision/Setting an Agenda.”

Secondly, Barack Obama rose in the overall ranking from 12th in 2017 to 10th in 2021, passing Woodrow Wilson and Lyndon B. Johnson (something I predicted in a May 14 article on History News Network).  Obama rose in six of ten categories, most notably in “Relations with Congress,” his weakest score in 2017, going from 39th to 32nd, a sign that scholars in the future will reassess the complications Obama faced from a recalcitrant House Republican majority for six of his eight years, and a Republican Senate majority for the last two years of his presidency.

Three presidents formerly rated very highly by presidential scholars suffered major losses in status, including Andrew Jackson, who dropped four points to 22nd; James K. Polk, who also dropped four points to 18th; and Woodrow Wilson, who lost two points to 13th.  All three have suffered on issues centered around race, and Wilson’s reaction to the Spanish Flu pandemic of 1918-1920 harmed him in the context of the COVID-19 pandemic.

The two Presidents Adams (John and John Quincy) each rose four points from 19th to 15th, and from 21st to 17th respectively. James Monroe and James Madison also have seen their stock rise, with Monroe now 12th and Madison now 16th, so it seems as if the Founding Generation is doing well by comparison to many later presidents.

Ulysses S. Grant continued his dramatic rise in the esteem of scholars, reaching 20th place, when he had been 33rd in 2000, before rising to 23rd in 2009 and 22nd in 2017. Also, quite surprisingly, Chester A. Arthur rose five points to 30th from 35th place in 2017 after being 32nd in 2000 and 2009.  One wonders if Arthur’s ranking went up because of his promotion of civil service reform with the signing of the Pendleton Act of 1883, and his veto of the 20 year Chinese Exclusion Act (he signed a 10 year limit only under great political pressure), as otherwise it seems to make no sense.

Interestingly, the two presidents before Barack Obama had opposite fortunes in this latest poll: George W. Bush rose four points to 29th from 33rd in 2017 and 36th in 2009, and Bill Clinton dropped four points to 19th from 15th in 2017 and 2009, after having started at 21st in 2000 after the Monica Lewinsky Scandal and his impeachment trial. It seems that Trump’s presidency may have helped promote some sympathy for Bush by comparison, and harm for Clinton due to the impeachment issue, while Obama’s presidency may also have harmed Clinton.

Also, the scandals and impeachments of Donald Trump may also have reflected on the falling status of Richard Nixon, who started off as 26th in 2000, 27th in 2009, 28th in 2017, and now is ranked 31st, below George W. Bush, Gerald Ford, and Jimmy Carter, despite Nixon’s many accomplishments.

Finally, we have had ten presidents who served less than a full term, whether by election or succession. None of them, with the exception of John F. Kennedy, who remains 8th, rank higher than 27th  (James A. Garfield, who like JFK, was assassinated).   And only Garfield, Gerald Ford, and Chester Alan Arthur are in the second group of fifteen ranked presidents.  The remaining five (Zachary Taylor, Warren G. Harding, Millard Fillmore, John Tyler, and William Henry Harrison) range from 35th to 39th on the list. Finally, Andrew Johnson ranks ahead of only James Buchanan, securing the 43rd ranking by a grand total of three points. In Johnson’s case, his impeachment, his racism, and his prickly personality continue to harm his reputation, and the sense is that in the next poll, he may well end up below James Buchanan.

More evaluation of the presidency will follow when other surveys are completed, in the coming months, including the American Political Science Association Poll and the Siena Research Institute Poll.  But Presidential Studies is ensured to be ever more controversial, with plenty of research on the men who have served in that office on the horizon.