Blogs > Steve Hochstadt > African Art Belongs Where It Was Created. Give It Back.

African Art Belongs Where It Was Created. Give It Back. 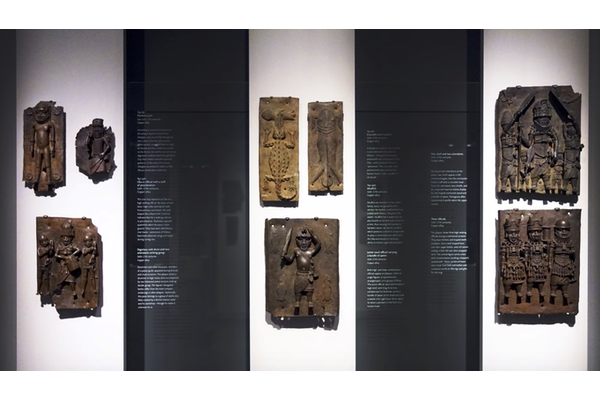 Two weeks ago, I wrote about the controversy at the Museum of Fine Arts in Boston, provoked by racist comments made at a group of black 7th-graders who were on an outing as reward for excellent school work. The Museum leadership proposed new procedures to be more welcoming. But the racial tensions that a visit to the MFA could arouse can’t be fixed by even the friendliest attitude toward African-American guests, because racism is embedded in the whole enterprise of international art collection.

We visited the MFA last week to see their new exhibit on the Bauhaus, whose creativity, aesthetic, and politics we very much appreciate. The path to the exhibit led through a much larger display of African art objects.

The cultural context in which African bodies were represented in objects is strikingly different from what we call Western art, so African artifacts in museums inevitably appear exotic to the Western eye. Because European whites assumed that their civilization was superior to all others, the creations of African artists were long considered primitive. The MFA, like most museums now, makes an effort to counter the myth of white Western superiority by stressing the high levels of skill embodied in their collection of bronze and ivory sculptures made over six centuries in the independent Kingdom of Benin, now part of southern Nigeria. The Benin kings sponsored workshops to produce objects of the highest quality, often depicting religious rituals, veneration of ancestors, and kingly power. The introductory sign said these pieces “rank among the greatest artistic achievements of humankind.” Other commentators on Benin art agree that the artworks in the MFA represent the finest creations of African artists.

The MFA signage explains a little about how these objects came to be in Boston. The Benin Kingdom was invaded by the British in 1897, Benin city was razed and burned, the King overthrown, and about 4000 artworks were seized as “spoils of war”. They are now housed in museums in London and Oxford, Berlin, Hamburg and Dresden, Vienna, New York, Philadelphia, and Boston. Few remain in Nigeria. The Benin objects are a small part of the British Museum’s collection of 200,000 artworks from Africa. In what I assume is a relatively new wording, the exhibitors at the MFA ask, “What are the ethics of collecting and displaying works removed from their places of origin during periods of European colonialism?”

Other cases of the “collection” of foreign cultural creations are instructive in answering this question. The Nazi state and its representatives systematically collected the valuables of the people they conquered, considered inferior, and were killing. They stole everything valuable from Jews in the Third Reich and across Europe. They looted official collections from the nations they defeated.

Over 70 years later, the return of these objects to their owners continues to pit those currently in possession against their previous and rightful owners. Legal issues complicate these discussions, but nobody argues against the moral right of the victims and their descendants to their property. The universal belief that Nazi stealing was morally abhorrent is the foundation for every discussion of return.

When Soviet armies pushed into Germany, they took vast quantities of art from museum collections. The Russians made a persuasive claim – German armies waged a war of obliteration against the Soviet population and landscape. The German art works taken back to the Soviet Union were only a token compensation for property destroyed and millions of lives lost. Since then, some have been returned and some remain in Russian museums, objects of international argument. In 1998, Russia passed a law legitimizing their continued possession of what they termed “Cultural Valuables Displaced to the USSR”, with this justification: “partial compensation for the damage caused to the cultural property of the Russian Federation as a result of the plunder and destruction of its cultural valuables by Germany and its war allies during World War II.”

No such justification exists for the presence of African artifacts in Western museums. They were simply taken as part of a wider appropriation of value by Western colonial conquerers, who simply showed up in independent African nations and kingdoms, killed anyone who tried to defend themselves, and took whatever they wanted back home. Although the US was not part of the colonial scramble which divided up Africa in the late 19th and early 20th centuries, American collectors and collections now possess large quantities of the stolen objects.

Many white Americans, and other white Western peoples, see their relationships with Africans through a haze of patriotism and self-assurance. We were beneficent teachers about advanced human civilization, the unquestionable truths of Christianity, and the proper use of economic resources, earthly and human. The assumption that humans could also be property was no longer official national policy, but white supremacy still defined white, and thus US federal, policy. Ownership of property was changed through conquest.

We now share a significant debt with all the national looters by conquest, the Germans, the Russians, the British, the Portuguese, and other European nations. Our institutions, public and private, and many individuals, most of whom are very wealthy, owe reparations for organized theft. Difficulties in figuring out how it should be accomplished are no excuse for pretending the debt doesn’t exist.

The carefully worded acknowledgment that inhuman behavior lay behind the movement of African art into Western museums is new. But that’s too late and not enough. The middle schoolers from the Helen Y. Davis Leadership Academy did not need a guard to mention watermelons to experience racism at the MFA. The collections of African art proclaim the racism of the past, the white assumptions that they could take anything they wanted from blacks, including their labor and lives.

Now the MFA admits this is controversial. It isn’t. White colonial conquest of Africa was a holocaust before the Holocaust. The fruits of genocide lie in glass cases in Western museums.

African art belongs where it was created, where it is meaningful rather than merely exotic, where it could induce pride in its creation instead of shame in its looting.