by There's No There There tags: Philippine-American War; Albert Beveridge; George Hoar; Polner 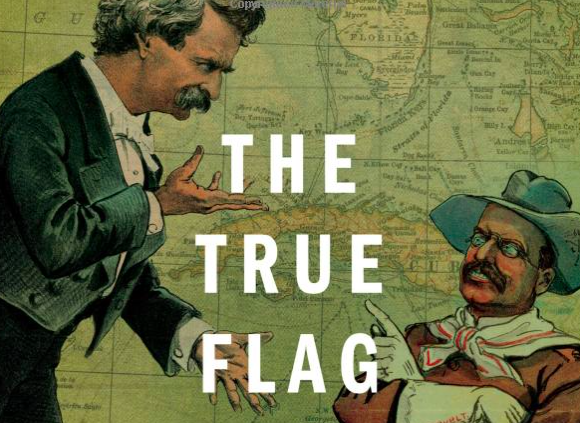 After the end of the Civil War, with 750,000 killed and many more wounded in body and mind, the historian Frederick Jackson Turner famously informed Americans in 1893 that the frontier was closed, suggesting to some that perhaps an era of peace lay ahead. Even so, the U.S., historically addicted to adventurism and expansionism, could never remain at peace for long. The 1890s opened, for example, with the attack on Wounded Knee, where 146 Sioux were massacred by U.S. cavalrymen and ended with the conquest of Cuba, Puerto Rico and Guam. A world dominated by rapacious empires now had a new member of the club.

But first Cuba. Though Spanish cruelty was irrefutable, the invasion of that island was aided and abetted by a stream of lies offered by the U.S. and  the press,  along with crocodile tears about poor, suffering Cubans, a sympathy which vanished once white Americans learned that many Cubans had dark skins.  William Graham Sumner, the acerbic  Social Darwinist and likely founder of modern sociology,  wrote a fuming essay, "The Conquest of the United States by Spain." " My patriotism is of the kind which is outraged by the notion that the United States was never a great nation until in a petty three months' campaign it knocked to pieces a poor, decrepit, bankrupt old state like Spain."

It got worse. When Spain surrendered Cuba in the Treaty of Paris in December 1898 Americans were allowed to buy the Philippines, a Spanish colony, for $20 million. But Americans knew little or nothing about that distant archipelago, or as the American satirist Finley Peter Dunne, AKA the Irish bartender Mr. Dooley, put it in his wonderful brogue, Americans barely knew if the Philippines were islands or canned goods.

In 1896 a revolt  in the Philippines against Spain was  begun by a secret society, the Society of the Sons of the Country, or Katipunan, as it was commonly called by the local native elite who spoke Tagalog, which had much appeal to ordinary Filipinos.  A few days after Admiral George Dewey's armada, acting on TR's orders after his boss went on vacation, arrived in Manila Harbor and destroyed the Spanish fleet, the influential expansionist Senator Albert Beveridge told an audience in the Middlesex Club in Boston: "We are a conquering race...we must obey our blood and occupy new markets, and if necessary new lands." He later expanded his highly popular views to the Senate: "We will not renounce our part in the mission of our [white] race, trustees under God .... [who] has marked us as his chosen people."

And so it has been ever since. America as the unquestioned exceptional and indispensable nation.

Emilio Aguinaldo, the Filipino leader, hoped  the U.S. would recognize his self-proclaimed government. But the U.S.  was convinced that acquisition of the islands would not only be very good for business, (with Guam as a naval station) but that it would also provide an entryway to potentially lucrative East Asia markets, and at least for President McKinney, it was God's will to have "benevolent assimilation" foisted on needy and ignorant Filipinos.

10,000 US troops were dispatched to the Philippines; by 1900 there were 70,000.  In the end, an estimated 120,000  U.S. troops served there.  Like Vietnam, and to some extent Iraq as well, "Pacification of the rural population was sometimes affected by versions of forced relocations and other cruel actions," wrote Alfonso W. Quiroz in  "A War in Perspective, 1898-1998: Public Appeals, Memory and the Spanish American Conflict" for a NY Public Library exhibit.

The war, hailed by the overwhelming majority of Americans and their political leaders, led to the death of 4,234 American troops and 2,818 wounded, and an estimated 25,000 Filipino irregulars and 200,000 civilian casualties, writes Stephen Kinzer in his intriguing new book, "The True Flag: Theodore Roosevelt, Mark Twain and the Birth of American Empire." Both sides rarely refrained from torture, including waterboarding, an American specialty in Iraq. Once the Filipinos were put down, the road was open to future wars against Japan and North Korea and a growing competition with nuclear-armed North Korea and China.

Still, there dissenters at home, notably the Anti-Imperialist League, "perhaps the most disjointed anti-war movement in U.S. history," wrote Michael Kazin in "A Godly Hero," his illuminating  biography of William Jennings Bryan. Kazin called the League "mugwumps over the age of sixty" who, while exposing an unjust war and the carnage were, however, "unwilling and unable to stage mass demonstrations or mount a concerted lobbying campaign." The League included eminent elitists Mark Twain, Andrew Carnegie, ex-Presidents Grover Cleveland and Benjamin Harrison, Samuel Gompers. Williams James and Charles Francis Adams, Carl Schurz and Senator George Frisbie Hoar yet were hardly a match for passionate  pro-war Americans cheering on their "boys" in a brutal colonial war, much like the "Support Our Troops" campaign which masked the incredible blunder of invading Iraq and then setting the Mideast on fire.

Yet to their credit and despite bitter condemnations by war supporters, the League's dissidents bravely protested as best they could, writing, publishing and lecturing. Divided by class interests and politics (e.g., the capitalist Carnegie and labor leader Gompers), at least they said "no," while most opponents of the war were silent.  Not  E.L. Godkin, The Nation's editor, who put it in its true context:

"An immense democracy, mostly ignorant and completely secluded from foreign influence finds itself in possession of enormous power and is eager to use it in brutal fashion against anyone who comes along, without knowing how to do it, and is therefore constantly on the brink of some frightful catastrophe."

It's the sort of comment hard to find nowadays.

When the war finally ended, there was a short-lived presidential  boom for Admiral Dewey. And General Frederick Funston, "Fearless Freddie," who helped plan Aguinaldo's capture, received the Congressional Medal of Honor in 1900. He was accorded a hero's welcome when he returned home. In New York he denounced Filipinos as "a drunken uncontrollable mob" and said "all Americans who had recently petitioned Congress to sue for peace in the Philippines should be dragged out of their house and lynched."

I rather prefer Massachusetts Senator George Hoar, my favorite Anti-Imperialist Leaguer. He delivered his final shot against the neocons of his era: "You chose war instead of peace. You chose force instead of conciliation... sacrificed nearly ten thousand [sic] American lives, the flower of our youth. You have devastated provinces. You have slain uncounted thousands of people you desire to benefit. You have established concentration camps. Your generals are coming home from their harvest, bringing their sheaves with them, in the shape of other thousands of sick and wounded and insane...."

Who, asks Stephen Kinzer in "The True Flag," gave the U.S. the right to make decisions for the rest of the world? Or as one of our more astute pundits, Eric Margolis, posed in a slightly different way, "Who came down from the mountain and said the U.S. must police the globe?"