Heather Munro Prescott is a Professor of History at Central Connecticut State University. She is the author of "The Morning After: A History of Emergency Contraception in the United States" (Rutgers 2011). 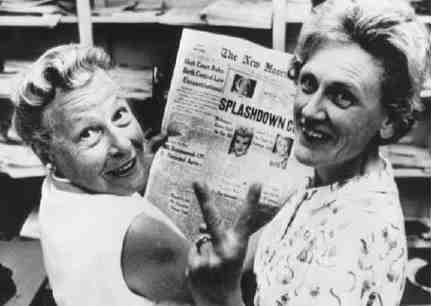 At this year’s annual meeting of the American Association for the History of Medicine I participated in a panel on Reproductive Rights after Griswold: A Fifty Year Retrospective.  Since the meeting was held in New Haven, Connecticut, it was a fitting venue for such a commemoration.

Here is the video of the panel and the question and answers that followed. For those who don’t have the time or inclination to watch the video, here are some highlights:

Barbara Sicherman, William R. Kenan, Jr., Professor Emerita, Trinity College, set the stage by briefly summing up the Connecticut law prohibiting the use of contraceptives and Planned Parenthood’s efforts to overturn it, which culminated in the landmark Griswold decision. Dr. Sicherman is currently doing research on the illegal birth control clinics established in Connecticut in the 1930s, a follow up to “’Let’s Do It’: Women Making History in the Land of Steady Habits,” Connecticut History (Spring 2012).

This introduction was followed by a first-hand account by Rosemary A. Stevens, DeWitt Wallace Distinguished Scholar in Social Medicine and Public Policy at Weill Cornell Medical College, Department of Psychiatry, and the Stanley I. Sheerr Professor Emeritus in Arts and Sciences at the University of Pennsylvania.  For Dr. Stevens, Griswold v. Connecticut is a personal history because she was the witness testifying against Griswold and the physician who gave her contraception, Dr. C. Lee Buxton, at the trial in New Haven. Dr. Stevens described the contentious atmosphere at the time, how she came to be involved and what happened; with brief comments on the case as history.

What is especially notable about Dr. Stevens’ talk is how access to birth control affected women’s educational opportunities.  Dr. Stevens was a graduate student at the Yale School of Public Health at this time.  Being able to delay having children was key to her ability to finish her degree.  As a recent immigrant from Great Britain, Dr. Stevens put herself at considerable risk of deportation by admitting to the crime of using contraception.

Next was a presentation by Professor Reva Siegel,  Nicholas deB. Katzenbach Professor of Law at Yale Law School.  She briefly discussed the debates that engendered Griswold and the cases that followed in its wake. She then considered how the culture wars of the 1980s shaped modern understandings of Griswold and its progeny, concluding with current conflicts over religious objections to contraception and over the right of same-sex couples to marry.  Her presentation is especially relevant to our understanding of Obergefell v. Hodges, the gay marriage case that is currently before the U.S. Supreme Court.

Linda Greenhouse, Joseph Goldstein Lecturer in Law at Yale Law School, talked more specifically about Roe v. Wade as Griswold's progeny. She showed how Griswold crucially informed Roe v. Wade at a time when the sex equality claim for a right to abortion was not a plausible option for a Supreme Court that had not yet established a jurisprudence of sexual equality.

My presentation followed.  I started by discussing how I use the Griswold v. Connecticut case in the classroom.  Because I teach in Connecticut, the case has special resonance for my students, many of whom have relatives who lived through the era when the case was decided.

I like to use the Griswold case to bust my students’ misconceptions about the so-called sexual revolution of the 1960s. One key point I bring out when discussing the language of Griswold is the decision only protected the rights of married couples to use contraceptives in “the sacred precincts of marital bedrooms.” This opinion was very much in keeping with the family values of the postwar era and the belief that the middle-class home was a zone of privacy that should not be intruded upon by the state. The court’s emphasis on the sanctity of the marital bedroom made it difficult to extend the same line of argument to unmarried persons, except within the context of premarital religious counseling.

In my presentation, I drew on points I made in my book Student Bodies: The Influence of Student Health Services on American Society. I discussed how college students played a critical role in expanding access to birth control for unmarried persons. I examined the partnership between student organizations and Planned Parenthood's Program of Student Community Action to get birth control included in college and university health services. I also look at the relationship between college student activism and the work of contraceptive salesman turned reproductive rights activist Bill Baird who purposely violated Massachusetts law against distributing contraception to unmarried persons. Baird won the support of students throughout the nation, who picketed for his release.  Eventually, the U.S. Supreme Court reversed Baird’s conviction, stating in their ruling case Eisenstadt v. Baird (1972), “if the right of privacy means anything, it is the right of the individual, married or single, to be free from unwarranted governmental intrusion into matters so fundamentally affecting a person as the decision whether to bear or beget a child.”

I concluded by observing that recently, there have been repeated efforts to undermine access to birth control and abortion, especially for young, single women. It is important to remember earlier strategies used by campus groups so they can inform the work that students are continuing to do for reproductive rights today. The last presenter was Judy Tabar, President and CEO of Planned Parenthood of Southern New England (PPSNE). Ms. Tabar showed how access to contraceptives during the 50 years since Griswold has made a dramatic impact on the lives of women, men and families across our country. She spoke about the link between reducing unintended pregnancies and a whole host of positive effects for women and men, from improved health outcomes for women and their babies to expanded educational and career options for women and their partners when they use contraceptives to delay childbearing until the time is right for them. She also discussed the evolution of the contraceptive methods available to women over the years, and noted some of the challenges that we are still struggling to overcome, such as recent public policy debates to limit contraceptive access and the persistent racial and ethnic health disparities that exist in relation to reproductive health outcomes.

Our presentations were followed by a robust discussion of the issues raised by Griswold v. Connecticut and their relevance today.  Ellen More from the University of Massachusetts School of Medicine gave a personal story of when she was an undergraduate prior to the Eisenstadt v. Baird decision.  She was very grateful to Planned Parenthood who, while they officially only treated women over the age of 21, did not ask for proof of age.  So, if you could count back twenty-one years and give the clinic a birth date they could live with, you were home free.

Dr. More is currently writing about women physicians who were advocates for sex education, with a focus on Planned Parenthood Medical Director Mary Steichen Calderone. She asked when did conservative Republicans start using the politics of abortion to draw conservative Democrats into the Republican fold.  Linda Greenhouse and Reva Siegel said that this began during President Nixon’s administration.  In the lead up to the 1972 election, Nixon’s campaign advisor Pat Buchanan began exploring how to bring Northern voters into the Republican party.  Buchanan used opposition to birth control and abortion as a way to lure the “Silent Majority” of white, urban, predominantly Catholic voters who were dismayed at the decline of traditional “family values.” This was the Northern counterpart to Nixon’s “Southern Strategy” to attract Southern Democrats to the GOP.  President Reagan continued this tactic by convincing evangelical Protestants as well as Catholic voters to join his opposition to reproductive rights.

Lara Freidenfelds asked about the parallels between Griswold, Roe, and more recent Supreme Court cases involving gay rights.  She observed that reproductive rights and gay rights involve different notions of privacy: taking contraception and having an abortion are things done in private, while advocating for gay rights involves coming out in public about one’s sexual orientation. Reva Siegel said that the “coming out” stories of women who had abortions were central to abortion activism in the 1970s. Lawyers included women’s personal stories of their struggles to find safe abortion services in their legal briefs. Over the past few decades, with the growing restrictions on abortion rights, she has seen women be less public about their abortion decisions. While gay rights has come out of the closet, abortion rights have gone back in.  Today, the most prominent coming out stories in regards to abortion are abortion regret stories used by abortion opponents.

A first year student at Trinity College asked if the growing availability of birth control on campus contributed to some of the problems of sexual assaults we now see on campus.  I answered that when students were advocating for birth control the feminist approach to rape as a crime against women and activism against sexual assault was just beginning. This is an example of how the sexual revolution was uneven for women: gaining access to birth control created new freedoms but it also created new pressures as well.

Judy Tabar added that studies of teenage pregnancy and sexual behavior indicate that when young people have access to accurate sex education they are more likely to delay having sex.  They are also more likely to use contraception when they do become sexually active.

Another audience member asked about whether the right to privacy is relevant in the case of Purvi Patel, the young Indiana woman who was recently sentenced to twenty years in prison for feticide following a miscarriage, which prosecutors allege was a self-induced abortion. I answered that this is an example of how the rights of young women, women of color, and poor women are especially vulnerable in our current political climate.

The last question was from Leslie Reagan Professor of History at Illinois who has written extensively about the history of abortion.  She said it’s important to consider the perspective of those writing the Griswold decision, that is, white, privileged men who are horrified by the thought of the police invading their bedrooms.  She pointed out that in fact there were cases of police invading the bedrooms in this era, such as the “midnight raids” on female welfare recipients to see if they were violating rules against having a man in the house.  She asked whether welfare rights activists ever used the notion of a right to privacy to combat these instrusions. Reva Siegel said that the Griswold decision was issued before the Supreme Court could imagine our current notions of gender equality.  She mentioned that Cary Franklin at the University of Texas is currently working on how to understand Griswold in light of more recent understandings of equal citizenship.

In short, the discussion celebrated what Griswold v. Connecticut did for women’s reproductive rights while also pointing out its limitations. It was a wonderful way to commemorate the decision, if I do say so myself. Edited versions of our presentations will be published in Connecticut History Review later this year so keep an eye out for the Fall issue.