Mr. Toplin, Professor of History at the University of North Carolina, Wilmington, is the author of a dozen books including Radical Conservatism: The Right’s Political Religion (2006).

Ronald Reagan rarely catches any blame these days for the present economic mess that is destabilizing markets in the United States and around the world. In fact, Americans often praise the former president for taking the country in bold new directions during his years in the White House. Politicians contribute to this love-fest by naming schools and roads after the iconic president

These admirers rarely acknowledge how central Reagan’s ideas are to the market difficulties troubling us today. As the country’s greatest modern champion of deregulation, perhaps Ronald Reagan contributed more to today’s unstable business climate than any other American. His long-standing campaign against the role of government in American life, a crusade he often stretched to extremes, produced conditions that ultimately proved bad for business. 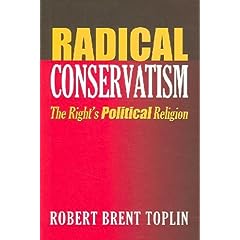 Ronald Reagan promised to take government off the backs of enterprising Americans. He told voters that government was not the solution to the nation’s problems; it was the problem. “The nine most terrifying words in the English language,” said Reagan, are, “ ‘I’m from the government and I’m here to help.’ ” His speeches contained numerous warnings about the chilling effects of bureaucratic regulation. Government leaders think, he said, “If it moves, tax it. If it keeps moving, regulate it. And if it stops moving, subsidize it.”

Ronald Reagan was not the only major champion of deregulation. Economist Milton Friedman served as the idea’s principal philosopher, and Newt Gingrich was a leading advocate in Congress. But Reagan was the most influential figure to make the term “government” sound like a naughty word.

The main problem with Reagan’s outlook was a failure to recognize that government regulation can serve business interests quite effectively. Many of the regulatory programs started by Franklin D. Roosevelt’s New Deal in the 1930s aimed to promote fairness in economic competition. That legislation required greater transparency so that investors could more intelligently judge the value of securities in the stock market. The reforms mandated a separation of commercial and investment bank activities, since speculative investments by commercial banks had been one of the principal causes of the financial crash. Roosevelt’s New Deal also created a bank insurance program, the FDIC, which brought stability to a finance industry that had been on the verge of collapse.

These and other improvements of the 1930s worked splendidly. For the next half century American markets operated with impressive stability. There were periods of boom and recession, but the country’s financial system did not suffer from the kinds of shocks that have upset the American economy in recent years.

The turn away from rules that promote fair business practices fostered dangerous risk-taking. An early sign of the troubles occurred on Reagan’s watch. When the requirements for managing savings and loan institutions became lax in the 1980s, leaders of those organizations invested money recklessly. Many institutions failed or came close to failure, and the cleanup cost more than $150 billion. Yet blame for that crisis did not stick to the Teflon President.

Recent troubles in the American economy can be attributed to a weakening of business regulation in the public interest, which is, in large part, a consequence of Reagan’s anti-government preaching. In the absence of oversight, lending became a wildcat enterprise. Mortgage brokers easily deceived home buyers by promoting sub-prime loans, and then they passed on bundled documents to unwary investors. Executives at Fannie Mae packaged both conventional and sub-prime loans, and they too, operated almost free of serious oversight. Fannie’s leaders spent lavishly to hire sixty Washington lobbyists who showered congressmen with campaign funds. Executives at Fannie were generous to the politicians because they wanted to ward off regulation.

Meanwhile, on Wall Street, brokerage firms became deeply committed to risky mortgage investments and did not make their customers fully aware of the risks. The nation’s leading credit rating agencies, in turn, were not under much pressure to question claims about mortgage-based instruments that were marketed as Blue Chip quality. Government watchdogs were not active during those times to serve the interests of the public and the investors.

The most influential person to call for a more powerful watchdog recently is Secretary of the Treasury, Henry Paulson. After responding to the credit crisis by working with the Federal Reserve to shore up and bail out floundering business organizations, Paulson has become the leading challenger to Reagan’s outlook on government. During an August 10 interview on Meet the Press Paulson stressed over and over again that “the stability of our capital markets” requires “a strong regulator.” Our regulatory system is badly “outdated,” Paulson complained. Market discipline should be tightened by assigning a “regulator with the necessary power,” said the Treasury Secretary.

Henry Paulson never mentioned Ronald Reagan’s name during the interview, but the implications of his remarks were clear. Reagan’s views of the relationship between government and business helped to put the nation and the world into a good deal of trouble. It is time to recognize that the former president’s understanding of economics was not as sophisticated as his enthusiastic supporters often claimed.

Reagan deserves credit for serving as a vigorous defender of free markets, but he carried the idea to extremes. Ironically, the great champion of business enterprise advocated policies that have seriously hurt business here and abroad.

You are right on target, as can be backed-up in the must read fact driven book, BAD MONEY, By Kevin Phillips.

The Democrats and Barrack Obama must urgently take off the Kid Gloves and inform the Misguided American Populist of the failed policies of the Reaganist and Republican Party, instituted on the behalf of the greedy and wealthist Americans. These policies have reversed the building blocks that brought our nation back to its feet after our economic fall "The Great Depression 1929-1936" and soild economic growth for almost five decades. Now this administration seems very willing to rescue failing financail instiutions for their cavalier, high risk and unethical, loan pratices, investments and packagining of CDO's and similar products; in other words the republicans believe in Socializing Risk that favors again only the greedy and wealthest of Americans. This action only further burdens our nation with debt and is of no relief to the thousands of Americans who have becomed unemployed or underemployed. This in a time that we are facing our most severe ecoonomic crisis since the Great Depression. It is time to stand up and tell the truth, we are in a the greatest financial recession since 1929 and are just around the corner from another depression; Administered and Legislated the same political party that was responsilble for the last depression. As the truth may hurt the American ego it is necessary, then and only then can we move forward meke the necessary governmental changes and truly bring this nation back under recovery.

The fiscal and tax policies of the Reagan administration led directly to the surpluses of the Clinton years. And besides, Reaan left office 20 years ago. To suggest he had anything to do with the present credit problems is complete nonsense.

The bad mortgages were the result of Democrats in congress pushing weak loans to home-buyers who were not qualified, punishing lenders who would not make them in "red-lined" areas, and guaranteeing the loans for those who did. The blame belongs squarely on Congress, and members of both parties. It wasn't that long ago that President Bush was crowing about the record home ownership of blacks achieved by his administration.

The Freddy and Fanny management teams governing these pools of bad mortages were a Democrat playpen, with Franklin Raines and Jamie Gorelick, former Clinton people, among others, cashing in optons for many millions. Those agencies were borrowing from the Government at a low rate not available to other mortgage lenders, and lending at the going rate, making a "profit" on the difference, much of which they schlupped into their own pockets.

Most of the experts I've read, both conservative and liberal, attribute the current credit crisis to unregulated commodities speculation, the commodity in this case being securitized mortgages. No doubt Fannie Mae and Freddie Mac could have both been managed better, but their current problems are primarily a result rather than a cause of the credit crisis.

Republicans controlled the Senate from January 1981 to January 1987, six of the eight years Reagan was president.

Most people agree that "the Republican Revolution" lasted from 1994 to 2006, during which time Congress was dominated by Republicans who identified themselves as Reagan Republicans. So if, as you say, the lawmakers for the last 20 years are primarily at fault, this doesn't seem to absolve Reagan's anti-government stance as the cause of the credit crisis.

So, you argument is that Ronald Reagan's anti-government stance led to failures of oversight that in turn let to the current 'credit crisis'? I would suspect that your point of "Fannie’s leaders spent lavishly to hire sixty Washington lobbyists who showered congressmen with campaign funds" and similar case of lobbying were far more important. While Reagan did have an anti-big government philosophy, it is Congress that makes the laws. A Congress one must add controlled by Democrats, not fans of Reagan's stance on government, from 1955-1995 including Reagan's years in office.

Additionally, it has been 20 years since Reagan left office, surely the lawmakers since then share (or shoulder) the blame for this failure far more than our 40th President.

I have been talking about it where I can. This 'free market' mantra of the Chicago School which has shown a propensity for devastation and sucking up wealth to themselves from the society around them. We see their end products of reduced or no regulation on our own economy now.